Neil Halstead is secretly one of the finest songwriters out there: his first success was found as the lead singer in the band Slowdive, an atmospheric shoegaze band that almost single-handedly defined the genre with its dense walls of sound and dreamy layers of texture. Once dropped from their label, the majority of the band then moved on to alt-country with Mojave 3, releasing five albums over eleven years, all of which display a consistency of talent that fans could knowingly rely on.Â  Mojave 3â€™s most recent album was released in 2006, and since then the band has been on a bit of a hiatus; in the interim Halstead has recorded his second solo album, Oh! Mighty Engine.Â  He has embarked on a US tour before continuing back in Europe, and recently performed at the Lizard Lounge in Cambridge, Massachusetts. The venue proved to be a perfect one for Halsteadâ€™s quiet, lulling style of music, and it would prove to be a wonderfully relaxing evening for those in attendance. 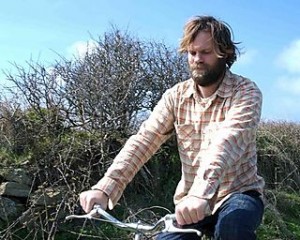 Halstead and his two band mates sat in chairs over oriental rugs, which were about as close to marking off the â€œstageâ€ area as you will get at the Lizard Lounge. â€œThis is the most intimate gig Iâ€™ve ever doneâ€, he commented as he sat alone in his chair, his fellow guitar players having gone to grab a drink at the bar while he played a few solo pieces. His set certainly included several cuts from Oh! Mighty Engine, but Halstead was kind enough to indulge the crowd with a fair number of Mojave 3 tunes. After playing â€œSometimes The Wheels,â€ a song which got some chuckles with â€œMan in a suit says he wants to talk to me about the big JC / Who the fuck is he?â€ he slipped right into â€œYer Feet,â€ one of Mojave 3â€™s more heartbreaking love songs. Though this rendition was slightly more upbeat than the studio version, it still maintained its melancholy tone, especially given the fact that Halsteadâ€™s lyrics are painfully good. The crowd was pleased to hear a Mojave 3 song, though, and the performerâ€™s interactions with his listeners would prove to be a theme of the evening. 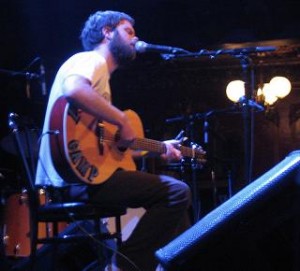 â€œPrayer for the Paranoid,â€ another Mojave 3 tune requested from an audience member, went off beautifully without a hitch until the very end. Halstead was about to approach the final line â€“ arguably the one that ties the whole song together â€“ and out of nowhere started coughing. He tried vainly to finish the song, but the fit of coughing was too much, and the song simply ended with no resolution, lyrically or harmonically. Of course, the audience didnâ€™t mind one bit. 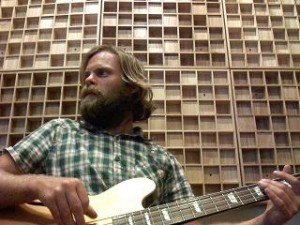 The set continued with a few more cuts from Oh! Mighty Engine. Of note was â€œHigh-Lo And In Between,â€ a song that is quintessential Halstead songwriting, included repeated lyrics to drive the point home, and singing about a specific named woman (in this case, Kathy). The set closed with â€œQueen Bee,â€ a song with beautifully simple lyrics that ended the show perfectly: â€œWhat did you say, hey hey, girl / Yeah, see you some time.â€Â  Hopefully we will indeed see Neil Halstead some time soon.