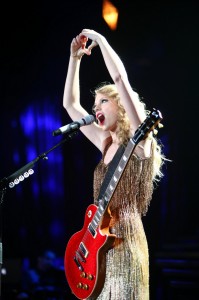 KIIS FM’s Jingle Ball is the talk of the town in Los Angeles as two of the biggest names in entertainment will be hitting the stage in two separate nights.  Taylor Swift and Justin Bieber will be playing shows at the Nokia Theater LA Live.  The venue seats only around 7,000 which is quite the departure from the sold out arena and stadium tours to which these artists have become accustomed.  Swift will take the stage first on December 1 as part of a star-studded lineup.  Bieber will take the honors on December 3 with another great lineup of live music planned.  The tickets are currently scheduled to go on sale to the public on October 20, but KIIS Club VIP members will have the first shot at tickets on October 19.  The VIP member presale will give the current members of the KIIS Club a chance to get their tickets before anyone else.  Check out the show lineups for each night below.

and a surprise Superstar Band!