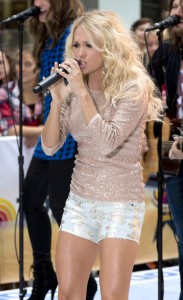 Carrie Underwood has extended her Blown Away Tour into 2013 with an additional 40 dates across the United States and Canada.  The new dates begin on February 13 in Colorado Springs, CO and end on May 18 in Edmonton, AB.  The shows will be an extension of the highly successful tour that is currently pleasing US and Canadian crowds all over the place.  Underwood has become one of the most popular female country stars ni the whole industry.  The recent release of Blown Away became her 3rd album to reach number 1 on the Billboard 200 charts.

The good news keeps coming for Carrie Underwood fans as the singer will be co-host of the CMA Awards on November 1.  She will be hosting alongside Brad Paisley for the fifth time.  The duo will kick the night off at Nashville’s Bridgestone Arena, but don’t forget to catch Carrie at some of the other stops along the way.

You can check out all the current 2012-2013 dates for Carrie Underwood below: