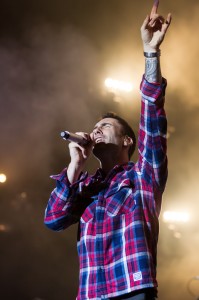 Maroon 5 has announced a new North American tour that covers the months of February through April.  The band was thrust back into popularity after the huge success of Adam Levine’s judge role on The Voice.  Maroons 5 will be out in venues starting on February 13th to bring to life all the hits from the new album that debuted in June 2012.  The album, Overexposed, followed up the smash hit with fellow judge Christina Aguilera.  “Moves Like Jagger” sold over 8 million digital copies and became one of the best-selling singles of all time.  The mainstream success of the single, as well as the stint on The Voice, has brought the band a whole new group of fans.  Overexposed followed this path with their most pop sounding album to date.  You can catch all the new hits and some goodies from the past at any of the stops on the new tour.  Your first chance to grab tickets will come later today with some exclusive fan club presales.  For those of you not in the fan club, there will be other presales throughout the week.  Check out the list below to see if Maroon 5 will be coming to a city near you!