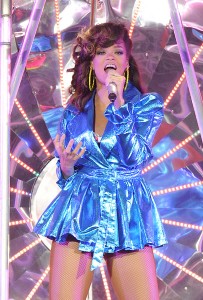 After walking away with the Video of the Year award at this year’s MTV VMA’s, Rihanna has announced a 27 date tour that spans across the US and into Canada names the Rihanna Diamonds World Tour.  The pop diva will be covering many of the larger arenas across the country during the tour.  Rihanna will kick things off in Buffalo on March 8, 2013.  The current plans call for the tour to span a 2 month period and wrap up in Brooklyn on May 4.  Fans of the 6-time Grammy Award winner will have their first chance to get tickets for some of the shows during a Citi cardmember presale on September 10.  Public onsales range from September 14-21.  The list below shows the dates that have currently been scheduled for the tour.  Visit Rihanna’s official website for more details on each individual show.