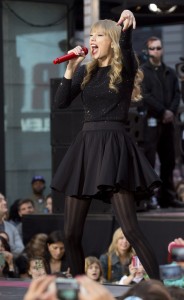 Taylor Swift has become the sweetheart of country music since she debuted at a young age.  The superstar, now 22, has rocked the music industry with the announcement just minutes ago of a tour that will sweep the nation.  Ed Sheeran will have the privilege of opening for Taylor on all the dates.  The tour will feature 9 stadium shows and over 50 total dates! The tour comes on the heels of the release of her new album Red.

You can catch Taylor in the following cities:

Tickets will go on sale the week of Novemeber 16th.  The first presales will take place on that day with the public onsale to follow shorly after.