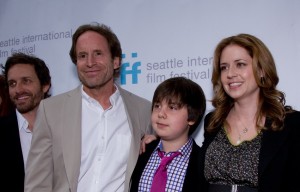 Although directors don’t like to hear this, some movies seem destined for success on Netflix rather than in theaters: you wouldn’t go out of your way to see them, but they’re a pleasant surprise when you stumble across them on DVD. This is the future I predict for A Little Help, an independent comedy that recently had its world premiere at The Seattle International Film Festival.

(Have you been following along with our SIFF coverage so far? Do so here!)

I might be associating A Little Help with watching movies at home because its cast is mostly known from TV. Jenna Fischer (The Office) stars as Laura Pehlke, a 35-year-old mother struggling to pull her life together after the sudden death of her unfaithful husband. Fischer is supported by a host of familiar faces including Brooke Smith as her bitchy sister, Rob Benedict as her adoring brother-in-law, and Ron Leibman and Lesley Ann Warren as her out-of-touch parents.

A Little Help was written and directed by Michael Weithorn, a veteran sitcom writer and producer (The King of Queens, Ned & Stacey, Family Ties). But the movie is better than these credits would suggest, as the laughs comes from the often awkward interactions between the characters rather than from a parade of set-ups and punchlines. Though a sitcom approach peeks through at times, the troubled family dynamics and characters’ internal struggles feel authentic, the tone is often dark, and the end is satisfyingly ambiguous. The story, which is set shortly after 9/11, also uses that historical event in a new and interesting way.

The movie premiered on a Friday night last month at Seattle’s Egyptian theater, where Fischer’s presence in the audience caused a bit of unrest among us normally stoic Northwesterners. Audience members could be seen sneaking peeks at her before the movie, and undoubtedly updating their Facebook pages to read “I’m sitting two rows away from Pam in The Office!” (I passed a teenage girl on the sidewalk after the premiere shrieking into her cell phone “I got her autograph! This is the best day of my life!”)

Also present were Weithorn, Benedict, and Daniel Yelsky, who plays Laura’s troubled adolescent son. The four answered questions after the premiere, which Weithorn pointed out was the first time the movie had been seen by the public other than a test screening in L.A. “We got people into that by giving them free tickets to The Bounty Hunter,” he said, then wondered with a smile, “was that a good deal?” I also had a chance to chat with Weithorn, Fischer and Benedict the next day.

On the script:
Weithorn describes the character of Laura as “a woman who had skated by on her good looks and charm, but now the choices she made that were easy and seemed effortless are coming home to roost. And life is not as easy anymore. I knew a woman who was going through something like that and I became fascinated and heartbroken – what that must feel like to have the rug pulled out from under you and not know why.”

On the characters:
Fischer wanted the role because it was the lead (her first) but the movie wasn’t a romantic comedy. “It wasn’t a woman looking for love but it was a woman struggling with life. She’s trying to be an independent person, yet at the same time be a great mom. She is having to grow up unexpectedly.” Fischer says her personality is different than Laura’s, but she could relate to the character’s turmoil. “I’m much feistier than Pam, the woman everyone knows me as. I’m not as explosive as Laura, but, you know, I am an actress and we are known to be dramatic. It was actually really fun because I got to channel all that and do it in a safe place without any consequences.” Benedict was also attracted by the chance to play a lead, not the “buddy role” he is usually offered. “He gets to be funny but also look inside. And the humor is genuine, not jokey – it’s rooted in reality.”

On the shoot:
Weithorn had to learn to direct actors differently than he was used to in TV. “Sometimes I would give notes after a take and say, ‘Well, you know, I think it would be funnier if you would pick up the glass on this line instead of the next line.’ Jenna and all of them really, really lived inside of the character and wanted things to be very organic … so I found that the first time I gave her notes like that and we’d do another take, it would ruin the take for her to have to think mechanically as opposed to just picking up the glass at whatever point it felt real.”

On future plans:
Fischer will appear in the forthcoming  Solitary Man (starring Michael Douglas and Susan Sarandon) and a Farrelly Brothers comedy with Owen Wilson. What’s her dream role? “You know, I would really love to be in an action movie, mostly for the physical challenge. I’d like them to pay me to get in amazing shape with a trainer  .. Also, I think it would be really fun to shoot guns and do the stunts … I would love to be in a Quentin Tarantino movie. I would really like to see what Quentin Tarantino could do with my honest face, to see what he could do to make me a little edgier.”