The new film The Social Network, based on the founder of Facebook, is a hot topic lately. It’s grossed a couple hundred million dollars and won tons of awards. Chances are you followed a link from Facebook to get to this article!

Many believe that social networking through internet sites such as Facebook, MySpace, or Twitter is a 21st century phenomenon and should be feared as it is new and unknown. Within ten minutes of meeting someone, we ask if they’re on Facebook. We are then inundated with all sorts of information about what they had for breakfast, or what chaos the kids just caused, or photos of their clean bathroom. While the instant availability of this information is relatively new, the concept is as old as people on Earth.

32,000 years ago, the date of the oldest known cave paintings, our pre-historic ancestors felt the need to “post” something about their lives. Cave person Grog used natural materials to make ink, which he then applied to the walls of his home to communicate to others what was on his mind. We now view these paintings as works of art when in reality they simply translate as “Dude, killed a wooly mammoth today, am very tired, but man are we gonna eat good tonight!” Or alternatively, “Wooly mammoth got away…Oh well, guess its sticks and berries again tonight.” Now, if one of your Facebook friends posted that they were having steak and lobster for dinner, or that it was mac n’ cheese and Spam for dinner tonight, you would pass right by, saying to yourself “who cares?” Let that post age for 32,000 years and your friend has made a giant evolutionary leap!! 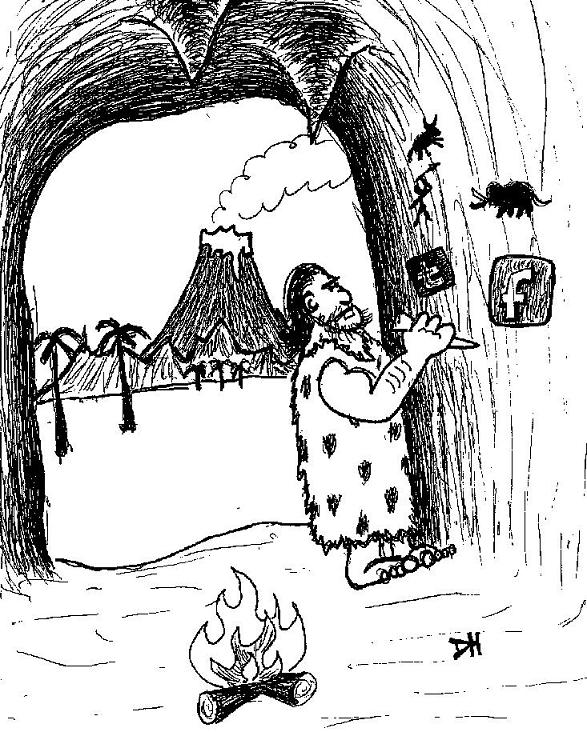 Let’s jump forward in time 30,000 years to our Greek friends who invented a way to use smoke signals to convey messages over greater distances. Now the ability exists to say the same thing, only the information travels faster than the speed of the human foot. One can imagine the following post by Odysseus: “Helen rescued, the dummies fell for the horse trick, be home soon!!” Or, “that one eyed bastard ate six of my men but we poked his eye out, be home soon!!” Or, “the hotties on that island tried to lure us ashore with their singing, but we hate Lady Gaga…be home soon!!” While we should never advocate replacing Homer’s epic poems the Iliad and Odyssey with Facebook posts, the idea of communicating events we feel are important remains the same.

Now ahead to Samuel Morse in 1844. On May, 24th of that year, he sent the first public telegraph message between the Supreme Court chamber in Washington D.C and Baltimore, Maryland. This message was “What hath God wrought.” One wonders what the first Facebook status update was in 2004? Probably not as profound, but just as significant to its writer nevertheless.

On March 10, 1874 Alexander Graham Bell uttered the first words by telephone, “Mr. Watson, come here, I want to see you.” Nothing Earth shattering, just an example of any random tweet, text, Skype, or post you see everyday in 2011.

Examples of every new development in communication through the 20th century could be explored here, but I think you get the point. Keep in mind that most of the significant advances in communication have occurred over the last 150 years, 0.5% of the time frame covered in this article. Those annoying modem connection noises were very common just 10 years ago. What’s next, electrodes hooked to your brain that allow you to “think” onto your computer? Don’t laugh, what would Grog think of Facebook?

In conclusion, the previous examples show how what we see as meaningless drivel now could be profound to future generations. I can envision some future cyber-archaeologist analyzing “It snowed today and my car broke down.” Facebook and other social networking sites are not to be feared, but are nothing more than the latest in a long line of tools that can make human interaction easier. If used properly, a hammer can build a city; but if you hit yourself in the head with one, it’s gonna hurt. This same concept applies to social networking, just another way to know that the guy you sat next to in seventh grade had Cheerios for breakfast and “likes” Lady Gaga.