Musically, Acid Mothers Temple aren’t easy to define. Sure, you could chalk it up as “psychedelic” music and leave it at that, and ostensibly you would be right: their songs regularly break twenty minutes in length, the band droning on a groove, breaking it up occasionally for some shouting or feedback attack. Or, alternatively, they’ll be absolutely freaking out, drums wailing, guitar cranked as high as it can go, tones from outer space zooming left and right. But there’s a lot more to this Japanese collective than meets the eye (ear?), and at The Middle East in Cambridge MA, performing as the Melting Paraiso U.F.O., they decisively demonstrated this.

Established around 1996, Acid Mothers Temple is the moniker given to the loose “soul collective” of musicians and music groups, largely revolving around guitar guru Kawabata Makoto, The Melting Paraiso U.F.O. being the most prolific all the groups. This is a band that is known for their live set and its ability to overwhelm even the most seasoned of ears, so it was no surprise to see a fairly large contingent of people in attendance with earplugs. I chose to go sans earplugs, figuring the band would want all of the soundwaves to reach my ears, and I found myself getting a bit nervous as the sound-check continued. Makoto blasted a sharp, simple riff on the guitar, and it wasn’t long after they got on stage that those earplugs came in handy for the faint of heart. 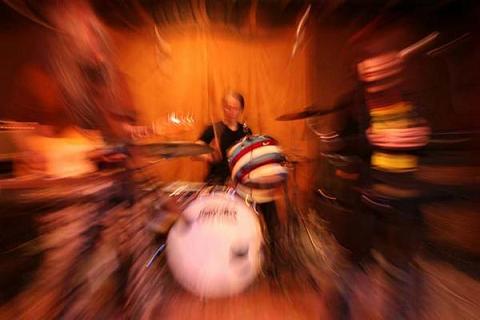 Almost immediately the band launched into the stratosphere, Makoto standing stage left, bent forward and strumming madly on his guitar while his long black hair flailed around in front of him. Drummer Shimura Koji led the charge, and you could see him burning calories the way he was playing, smashing at his drums like he had a personal vendetta against them. On top of it all were Higashi Hiroshi’s synthesized sounds, which whirled all through the venue as he stood calmly manipulating his keyboard at center stage. While the band behind him played loud enough to shatter our beer bottles, Hiroshi’s Zen-like playing seemed strangely appropriate. In spite of all the insanity happening around him, the man just calmly turned knobs and raised and lowered pitches like it was no big thing.

It’s hard to use human language to describe sufficiently just how freaky-outy this freak-out was, but just try to imagine the most raucous ending to a good old rock tune, then multiply and stretch that into ten minutes and make it about fifteen times more intense, and you’ll start to get a good idea.

Acid Mothers Temple are about more than just making noise, though, and eventually the wall of noise gave way to a slightly less dense wall of noise, allowing Makoto to take his first real solo. Kawabata Makoto is a completely different type of guitar virtuoso: he somehow manages to retain a semblance of melody and key while simultaneously giving the listener no clue as to where he’s going, moving in between musical ideas faster than one can pick up on them. It’s chaotic playing that often makes no sense to the listener, but you’ll be damned if you could say that every bent string and ear-piercing feedback loop wasn’t put there for a reason. Makoto delivered a steady, overwhelming mass of noise as the evening went on, but the calmer grooving drones were just as enjoyable. He is a well-seasoned veteran of psychedelic guitar; shades of David Gilmour, Jimi Hendrix, and Robby Krieger made themselves known throughout the performance, albeit in a heavily distorted and manipulated way. 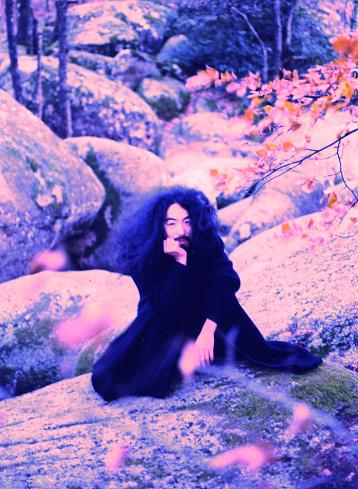 I’ll be honest: I wasn’t really able to pick up most of the band’s set list for this performance. Their discography is huge, the band never figures out a set beforehand, and, in the vein of The Grateful Dead, they’ll often perform live versions of their songs that are dramatically different from how they appear on the studio releases. Not to mention that they stretch their songs out to forty minutes more often than not, and will weave through one or two songs before finally returning to finish what was initially started. In any case, they did perform two standards of the band, “Pink Lady Lemonade” and “Dark Star Blues,” as well as “Planet Billions of Light-Years Away,” a section from their “Cometary Orbital Drive” suite, which may have just been a part of “Pink Lady Lemonade,” or even a freely improvised section that happened to sound like that song.

As far as loudness goes, well, Acid Mothers Temple are definitely loud as hell. Even when the band was droning in a relatively quiet section, they were at a point that most bands can only dream of reaching with their grandest finales. After the show, my ears rang for two days, and it was hard to decide on what music to listen to during that period. Anything recorded can’t match the show AMT put on as far as sheer decibels and fullness of sound go. The show ended with Makoto laying down yet another impressive, virtuosic solo, building it up to a forceful blast of noise, and before walking off stage he got up on the bass drum, pulled down some wires from an open ceiling tile, and just let his guitar hang there while the band exited, while the amps pumped through the noise of the hanging guitar. There was a confused moment while waiting for the encore: the initial applause died down pretty quickly without the band coming back on stage, and two more rounds of applause needed to be summoned before they walked out to do one more minute-long freak-out before the show ended.

Acid Mothers Temple keep you on your toes all night. No one seemed impatient for the band to get to a song’s grand climax (if it was coming at all), and when they had been resting in the same groove for fifteen minutes only to come out with something completely new, there was never a sense of relief or even anticipation. It’s always a treat to see a band combine truly structured songs with some really open jams, giving everything an organic and unpredictable character. There doesn’t seem to be a lot of good old psychedelic music these days – the heyday passed decades ago – but Acid Mothers Temple insure that the tradition is alive and well in at least one band out there.

All photos courtesy of the AMT website and Myspace page