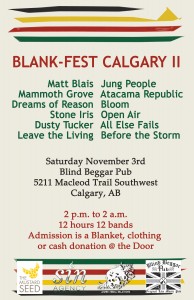 With the success of last year’s Blankfest Calgary, a full-to-capacity event at Blind Beggar’s Pub that raised nearly $1,000 and over 200 blankets for the homeless in one of Canada’s coldest cities, it is a great pride to announce the music charity fundraiser will return for its second annual event in support of Calgary’s homeless shelter The Mustard Seed.

Taking place from 2pm to 2am, 12 rock and metal bands from across the province will be offering their musical support to help raise awareness, funds and blankets for the homeless.

“We are really excited for Blankfest this year. The submissions for both Calgary and now our expansion to Vancouver have been phenomenal and its been very hard to narrow it down to just 12 for Calgary. It’s awesome to see the support that bands in the indie community are bringing forth. With the success of last year, we can’t wait to see what this year brings in both cities. We have an amazing team working on these events, and the passion involved is an overwhelming emotion,” comments Leanne Harrison, organizer of Blankfest Calgary and tour booker at local SIN Agency.

All proceeds from Blankfest Calgary will be donated to the city’s Mustard Seed, a non-profit organization that has been caring for the needs of the less fortunate since 1984 through its three centres across Alberta and delivers basic services such as housing and employment programs to those in need while partnering with the community to address the root causes of poverty.

The show details with order of band line up is as follows with genre:

Cost: Clothing Donation For The Homeless (Blankets, Sweaters, Shirts, Socks, Pants, Jackets etc.) or Pay What You Want Donation (all proceeds go to The Mustard Seed)

Blank-Fest is an annual benefit concert, usually held one-to-two weeks before Christmas, which raises blankets for the homeless. It was founded in 1997 in Nyack, NY (a suburb approximately 20 miles outside of New York City) by Kenn Rowell who is the frontman for the NYC-based band, The Baghdaddios.

Over the years Blank-Fest has collected over 5,900 total donations for the homeless. With the exception of one year (2001) donations in every year has increased. Much of this growth can be attributed to increased exposure through local radio, the internet and the press, including featured articles in the New York Daily News and mentions in the New York Post.[1] In addition there have been satellite shows that have been formed in other states, cities and countries. So numerous have donations been in recent years that volunteers have had to split the distribution/delivery of blankets to the less fortunate on multiple nights, starting on Christmas Eve. Often excess donations are distributed to homeless shelters as well.

Efforts to duplicate the successes of the early Nyack shows proved elusive at best until New Jersey-based independent artist activist, Richard Kubicz read about Blank-Fest’s efforts in the Daily News and proposed a “sister show” at a local club in Garwood, NJ. The first Blank-Fest-NJ, promoted extensively through Kubicz’s D.I.Y. music website Let’s Rock America [1] was a resounding success, netting 200 blankets which were donated directly to a neighboring homeless shelter in Cranford and garnered notice in the Bergen County press in 2006. Last year’s second annual Jersey show produced similar results. Similarly, Blank-Fest UK [2] was founded in Nottingham, England after a local recording studio owner heard an interview with The Baghdaddios on the British Armed Forces Radio Network, BFBS Radio One during the group’s Summer 2007 tour of England. Upon hearing about both the American and UK efforts Ontario-based photographer Gaynor Fletcher approached Rowell regarding the formation of a Blank-Fest Canada show. Also, debuting in 2007, in Guelph, ON, the inauguaral Canadian event featured popular Canadian folk artist James Gordon and was covered extensively by the Canadian media [2], raising well over 100 blankets.

In addition to these shows former Baghdaddios bassist, John Sidoti joined forces with local internet radio personality Ron Purtee to develop the first-ever Blank-Fest Wisconsin, [3], also in 2007, in the Milwaukee-area suburb of Racine.

Currently plans are in development to expand Blank-Fest even further. There has been talk of shows in Texas, Northeast Pennsylvania, Ohio and Atlanta, GA. Several additional popular artists have been approached regarding future such shows. Quoted in a newspaper interview in 2000, Rowell maintained that “as long as there is the issue of homelessness we will continue to have a Blank-Fest”, further adding that he wishes “we didn’t have to hold these shows” but that, until the situation dramatically improves, everyone involved understands that they really have no other choice.