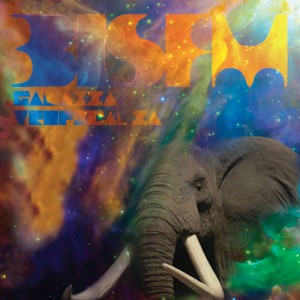 Blasfemea has apparated onto the music scene with their tripped out and tropical psychedelic electro-pop music. Their newly released album Galaxia Tropicalia features 11 tracks and each track is a girl’s name. The guys that make up this creative girl-obsessed foursome have been pegged as the darlings of the pop underground in Lisbon, Portugal. The members of the group are Tiago Amaro, Fabio Jevelim (vocals and guitar), and the Lourenco brothers; David and Rui on drums and bass. Their musical style would fall into the same corral as MGMT or Vampire Weekend. One might say they have a sparkling hallucinatory sound with vibrant beats and silvery tones intermingling with childlike laughter. The album is very upbeat and would be great in the club or for nights spent on the beach with friends, a bonfire, and some cocktails… Or maybe even an all out party.

As we enter Galaxia Tropicalia, the opening track “Maria,” comes in with a swirling synth frenzy that phases into guitars and drums and interlaces with metallic dance beats. The lyrics, “You’re like hot chocolate in the morning, warming me up inside,” starts us on our trip through Blasfemea’s galaxy of girls. The following song “Kami,” comes in a bit softer, but still dance ready with silvery bell-like tones infiltrating and slinking through guitar and drum beats. For “Kaede,” you get to ride the 80s new wave sound heavily channeling New Order and Depeche Mode, with a chorus of the la la la’s and some space-like keyboard effects that sound like laser guns thrown in for more 80s flair. My favorite track on the album is “Catherine;” it has a glittery and airy sound that balances on an almost Bowie-esque edge. The song “Ida,” features The Dead Kids (who are from London) as the beginning of the song is segued into with a speaking intro and it sounds like the guys from Right Said Fred (you know, the ones who sang “I’m Too Sexy.”) Once they start singing, it escapes the Right Said Fred label. To do a vocal comparison for the group (Blasfemea); if you were to take Billy Corgan and Gerard Way’s voices and had them start an electro pop band it might have a very similar sound. The only track on the album that didn’t really thrill me was the cover of Michael Jackson’s “Diana;” maybe covers just aren’t their forte because all of their original tunes are fantastic. They close out the album with the song “Requiem for Latika,” which takes a sound trip back into the 60s with a Beatles-influenced pop sound. The influences that infiltrate the album have created a really great fusion of music; take out “Diana,” and you have a perfect electro-pop album.