CHARITY OF THE MONTH: OCTOBER 2011

Each month we feature a new charity to share with our readers in hopes that they might donate to or at least spread the word to others for awareness. For October we decided to profile Sean Penn’s J/P HRO.

Within hours of a ravaging earthquake, Sean Penn landed near the epicenter and immediately began building his humanitarian organization in Haiti. The disaster killed more than 220,000 people and left close to two million homeless in Jan. 2010. Today the J/P Haitian Relief Organization, by most accounts, is one of the most effective in Port-au-Prince.

Unlike some Hollywood humanitarians, Penn travels without an entourage or body guards. He lived in and worked out of tent for the first nine months after the earthquake. “He comes here to work. And work hard,” says Benjamin Krause, J/P HRO’s country director. “It is inspiring to have a boss committed to the work and being with the people.” 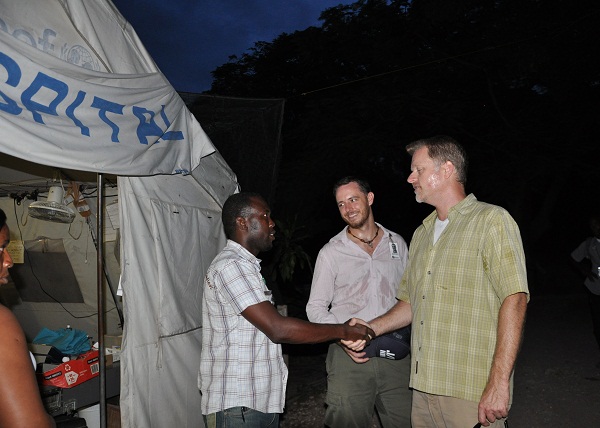 Ben Krause, in the center

Krause describes the Haitian people as dedicated, optimistic and resilient. “It is quite astounding,” says the 12 year veteran of non-profit and charity work. “They have had a rough year and a half,” he explains, considering they have lived through an earthquake, storms, unrest, and a cholera epidemic. In response to these challenges, J/P HRO has established four programs dealing with rubble removal, the cholera outbreak, medical care and camp management.

Days after the earthquake, refugees started moving into makeshift tents fashioned from wooden poles, tarps and dirt floors. J/P HRO manages the Pétionville camp, which sits on what was once the only golf course in Haiti, and a smaller camp nearby. Today 50,300 are still living in the vast tent city. It now has a free clinic, a school, a market, a movie theater, several beauty salons and its own red-light district.

Click here for a brilliant visual at The New York Times.

Krause told his crew to take weekends off because he worried they would burn out. After returning from a four-day holiday, Krause found them looking embarrassed because they had all worked anyway. “It makes you tear up to hear that,” says Krause. “It is really wonderful.” His staff completed 24 small houses in those four days.

J/P HRO also runs two free clinics that provide some of the best round-the-clock emergency and primary care in Port-au-Prince. Krause even took his mother to a J/P clinic when she needed treatment for heat stroke.

Even before the earthquake, Haiti was one of the most dangerous places in the Western Hemisphere for a pregnant woman. The United Nations Population Fund reports Haitian women face a one in 47 lifetime risk of dying in childbirth. However, J/P HRO’s medical staff has successfully delivered more than 350 babies.

The women’s clinic provides overall health services and helps deal with unrest in the camps. While all residents face violence, women and girls also fall victim to increased rapes and sexual assaults. J/P HRO counters sexual violence by giving women counseling, providing a safe place to share their experiences and supporting them as they report these crimes to Haitian police. Lighting at latrines and showers has also reduced violence.

In addition to J/P HRO’s core medical program, they have set up a cholera isolation zone fully run by a Haitian staff. J/P HRO director of operations Ron Baldwin traveled to Haiti to assist with the cholera response. “It was a very intense experience,” he says. 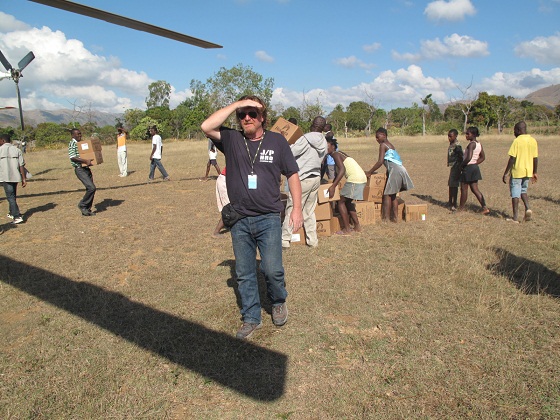 J/P HRO worked with other organizations to supply medics and resources to some of the hardest-hit areas nationwide. Baldwin rode on helicopters assisting with the response, giving him the unique ability to see the beauty of the country from the air and the harsh conditions people live in on the ground.

In Pétionville, Baldwin worked with an emergency response team of Haitian volunteers. He went to camp late one night because a rain storm had caused power outages and the cholera tents were flooding. “Out of the gloom of night, the team; with no shoes, very little clothing and no equipment really, emerges,” he says. “They had nothing but a desire to help…That’s a really powerful thing.”

A fact sheet published by ReliefWeb last month reported nearly half a million total cases of cholera and more than 4,000 deaths to date. Baldwin says while the number of cases has stabilized, Haitians still need help dealing with the epidemic.

Determined to help people return to their homes, a rubble removal program seemed like a natural next step for J/P HRO. Some eight million cubic meters of rubble still cover the Haitian capital. According to an expert featured in Rolling Stone, that is enough to build a road from Port-au-Prince to Los Angeles and back.

Krause says the devastation in Port Au Prince is like if half of the buildings in Chicago were unsafe and another quarter had fallen down completely. J/P HRO is rebuilding the Delmas neighborhood, the home of most Pétionville inhabitants. Rubble piles six to nine feet above ground in many areas. “Until the rubble is cleared, people can’t start to get back on their feet,” says Krause. He adds that a couple of weeks after they remove rubble from an area businesses and schools start reopening.

Every day 200 to 500 camp residents have the opportunity to earn money by performing various tasks including building canals, or removing trash or clearing rubble for J/P HRO. They plan to expand this to 700 or 800 workers a day. The program has also inspired Haitians to clear wreckage from their homes by hand. 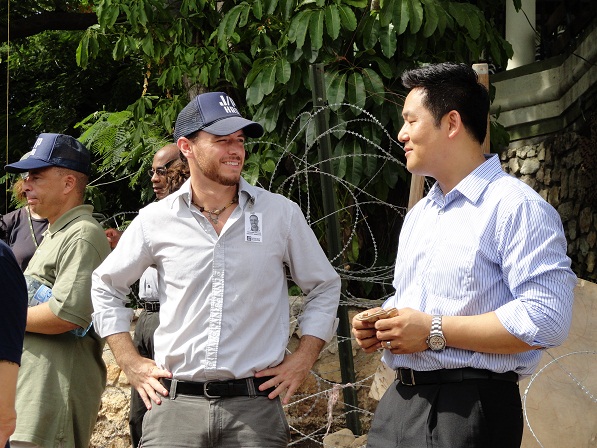 Ben Krause, on the left

J/P HRO has succeeded with their programs, despite the fact that billions of aid dollars pledged by the international community have yet to be released. “It is the hardest thing in the world to see people suffering because of the great disparity of the world,” says Krause, who has seen first-hand how red tape and bureaucratic bullshit can get in the way of humanitarian work.

Penn has publicly expressed extreme frustration over decreasing media coverage and aid for Haiti. Penn and Krause agree that money given to smaller organizations helps quickly and most effectively. “The tremendous need continues, but tremendous giving has fallen off,” says Krause. “Haitians are ready to work…I hope people will keep Haiti in their hearts.”

To get involved and lend a hand to J/P HRO, visit this page.

Recommended reads in Rolling Stone and The New York Times.