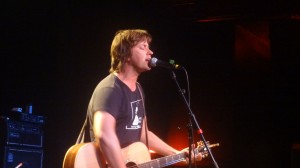 Old 97’s once again rocked The Showbox so hard the floors were shuddering.  It was a Tuesday night in Seattle, but when Old 97’s come to town, it really doesn’t matter what day they show up; their faithful fans will be there.  This time, the band came to celebrate the 15th anniversary of Too Far to Care, set for re-release October 9. They played their traditional favorites, but also included some surprises throughout the night.

The crowd gathered on the floor of The Showbox as Rhett Miller, Old 97’s frontman, strapped on his acoustic guitar and opened the show. He was promoting his new solo album entitled The Dreamer (Maximum Sunshine Records), and included “Out of Love”, a single off the album which currently streams on his website.   Miller also included a song called “Day Bed” that was originally cut from the lineup on Too Far to Care (TFTC).  He shook his booty while singing “Singular Girl” while the audience sang along.  Miller never takes himself too seriously, and admits to “shaking his ass” for money to support his family.  Miller finished off his quick set with the train song, “Wreck of The Old 97”.  Johnny Cash covered this song years ago, and it was an inspiration for the band’s namesake. 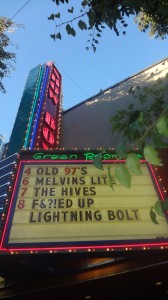 Those Darlins, the second opener, are a pretty punk band from Tennessee.  I was expecting a rockabilly or alt-country band, but instead was surprised by their darker punk sound. Their music sounded as if Joan Jett met The Go-Go’s and they all had sex with The Ramones.  Jessi and Nikki Darlin wore bright red lipstick, short shorts, dark stockings, and sexy tops.  They played rockin’ dual guitars and took turns at grinding solos.  Those Darlins also have a new album out entitled Screws Get Loose, (Oh Wow Dang Records).  The sound system was so loud for their set, though, it reverberated in our chests. Check out their website for a free download and to purchase their new album. 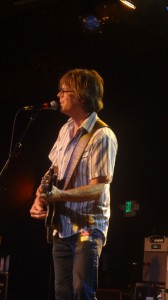 After a quick break, Old 97’s were ready to take the stage to a roaring crowd of loving and semi-intoxicated fans.

The four-person veteran band play rock ‘n’ roll, Texas-style.  They are a masculine band, but both men and women adore them.  The best way to experience Old 97’s is at a live show; their shows are so energized that they literally leave a part of themselves on the stage and the first few rows, which I call The Rhett-Sweat Zone.  Sweat, spit and rock ‘n’ roll.  They play train songs, drinking songs, love and heartbreak songs; songs about girls with big brown eyes, roller-skate skinny and stick-legged girls; lyin’, cheatin’ and murderin’ songs; even one song about a wayward cat.

Murry Hammond, Old 97’s bass player, started out the rest of the evening by exclaiming, “Ooh, have we got treats for you!”  He also mentioned there would be lots of surprises.  The first surprise came when they started their set with “Time Bomb”, Old 97’s traditional closer.  I then wondered what they were going to play to close the show.  I would find out soon enough.

They jumped right into “Barrier Reef” for their second song.   I soon realized they played TFTC in its entirety for the first part of their set.  Another surprise was John Rauhause, a guest artist on pedal steel and banjo. He played on the original TFTC record and played on several songs throughout the night. 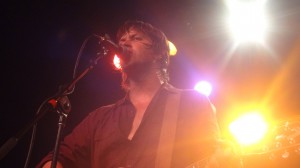 The band continued to churn through their long set.  They threaded in newer music, including ones from their latest project, The Grand Theatre, Vols. One and 2 (New West).  My favorite off Volume One is “A State of Texas” which has such a classic Old 97’s sound with its fast tempo, heavy drums, twangy and scratchy guitar solo, and Rhett belting out the chorus. Most songs were met with cheers, and the audience joyfully sang along and bounced to the beat.  If the songs were not as familiar, the crowd still participated with nods and smiles.

Rhett got the Wind-Miller going during several songs and let his picking arm spin around so fast it looked like he had a swivel for an elbow.  There was a reason the front row was lined with women.  He has the perfect frontman good looks and plays to the crowd.  Later, after sweating through his shirt, he swigged a bottle of water and sprayed it up, fountain-style, sprinkling the gleeful audience with a saliva-water mist.

Ken Bethea’s raw, gritty and recognizable guitar riffs are an instrumental (pun) part of Old 97’s live sound.  He played with the front row, stood on the very edge of the stage and teased us with the neck of his guitar. When it was time for a solo, the crowd pushed left, toward Ken’s side of the stage. 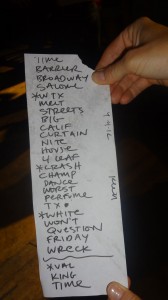 Murry also got his chance to shine.  I know of audience members who make a point to stand on “Murryside” to watch him.  He sang quite a few numbers, including “West TX Teardrops” and “Valentine” in the encore.  He’s a dynamic bass player and his singing voice has a low, old-fashioned country charm.

Philip Peeples, sporting a thick moustache, impressed me again as he consistently banged away so furiously on the drums.  Most impressive was the ominous drum intro to “Four Leaf Clover”.

The biggest surprise of the night came during the encore when everyone was buzzing about how they would end the show.  Murry sang “Valentine” first; then they plowed into “King of All the World”, and I thought they would end with that song.  Instead, Old 97’s BOOKENDED the show with “Time Bomb”.  The crowd went into hysterics and both band and audience were completely spent and satisfied by the end of this Tuesday night, covered in a frothy glow of sweat, beer and spit.