So when was the last time you attended a film festival that was in your neighborhood, and in strangers’ homes? The idea here is that short films (local and from all over the world, actually) are displayed in the homes of local volunteers. These willing participants open their homes to film-loving strangers by hosting a category and playing the course of films over and over every hour on the hour. Eventually winners are voted on and there are cash prizes for film winners. The film viewers only have to pay $10 to view as many films as they please all day long, and they are allowed to bring anything to eat/drink that they want to.

This is Couchfest. And it was a reality on November 7th, 2009 in the ‘burbs of Seattle.

Being that this festival is only in its second year, I wasn’t exactly an expert on the event, so I decided to go out and sample a few of the homes, environments, and films. Even if you can’t ever make it to Seattle for this annual event, then perhaps you’ll be persuaded to run with it as an idea wherever you live?

On a chilly, fall evening I stopped by the house that was hosting the horror films to pick up my press pass. The setting inside looked just right for the part as it looked pretty Halloween-ish inside from where I was standing. As usual, I was running late, so I needed to high-tail it out of there to the home that was showing The Inappropriately Awesome films.

I easily found the place, due in part to the fact that most of the viewing homes for this festival are just a few minutes away from each other in driving distance, which makes it pretty convenient for travel. A sign on the door presented a map, directing me to go around back to the viewing garage. The garage door was a little tough to get open and I’m not so sure that the garage gets used to house cars so much as a bunch of other stuff. 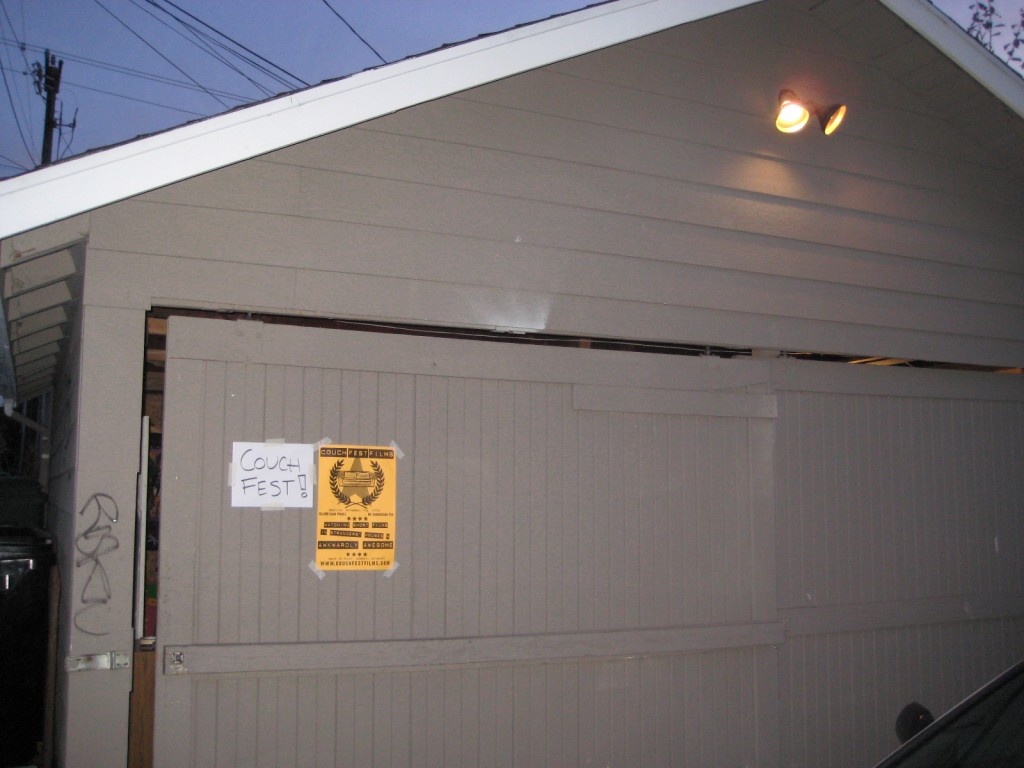 Inside, about fifteen people or so were gathered on multiple couches that were supplied with blankets, as it was kind of cold in the room. With a couple of minutes to spare before the films began showing on the projection screen, I nestled into a pretty comfy round chair in the back corner . 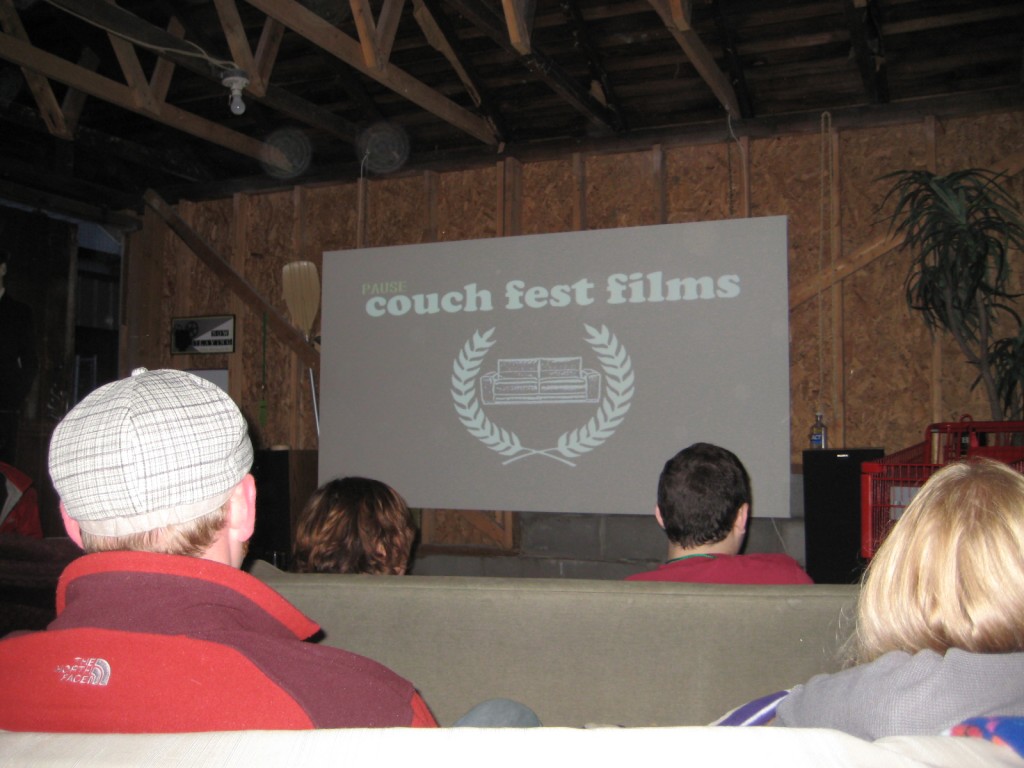 First up was the film Job Interview. I thought this smart-ass film was pretty funny. See for yourself…

Package Material features a couple simulating sex while engulfed in bubble wrap. As they start getting hot and heavy, you hear no sound other than the popping bubbles as they dry hump for the audience.

Rocket Sausage, a sketch comedy troupe from the UK, seemed to be all over this festival, and one of their films was Mr. Pencil’s Grand Design. Jim Carrey/Will Ferrell insanity is present here as a guy creates a model for a skyscraper out of Jenga blocks during a professional design proposal for a panel of judges. His antics seem ridiculous (and hilarious), yet he sells them on the idea.

Thunder Road and Environs is allegedly about “opposing forces.” I guess. I just didn’t get it. In usually reverse-action video, there are dumb tricks with fireworks and blades along with people urinating a lot, and sometimes streaking through streets. It is kind of like a tame version of Jackass mixed with Gummo.

As for Desperately Seeking Semen, this might be the best out of this category and the ending is over the top…

The Blood Brothers encounter a female vampire hunter and they talk her out ofÂ  killing them….in a disgusting, um, menstrual kind of way…

And that was that for the Inappropriately Awesome films. They wrapped after just about thirty minutes, even with a brief intermission. This gave me plenty of time to get to the next house which would be hosting Comedy 1. 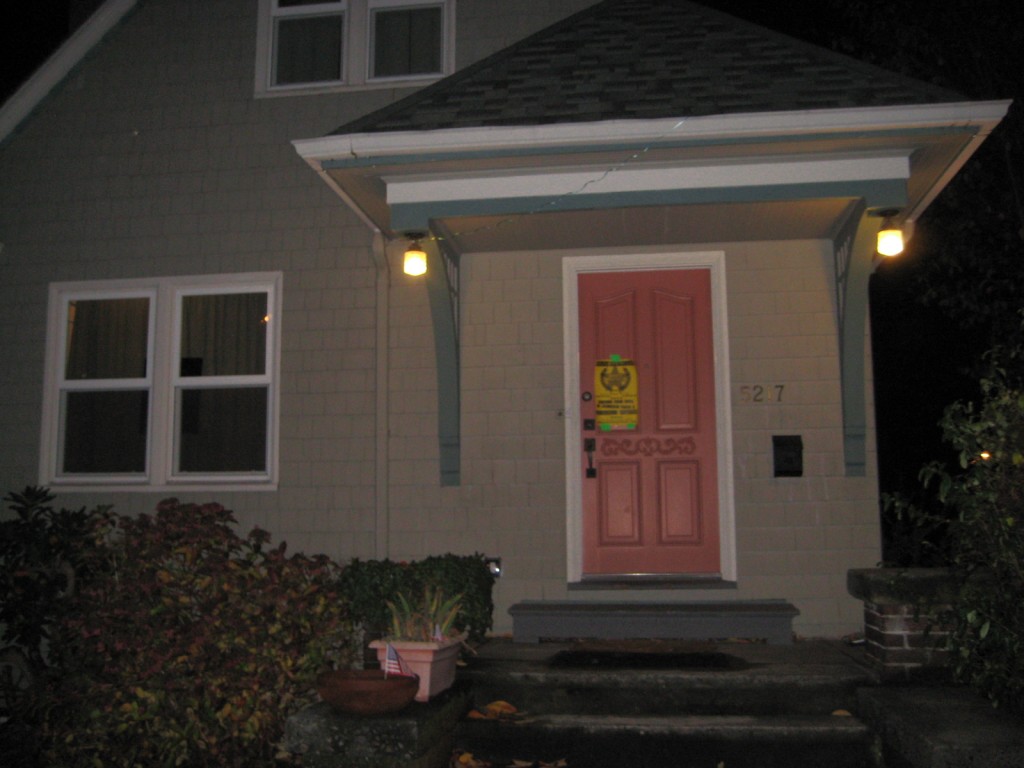 The living room at this next home was very cozy, complete with a fireplace and artwork by Eli Halpin on the walls with two adorable dogs andÂ a hefty cat coming by to visit all guests and getting showered with attention. A very sociable group of around ten people was gathered, discussing a wide range of topics, including the idea of making a film about parallel parking. The gracious hosts apologized for not having any food left, but the film viewers were happy enough with the environs that it didn’t matter. 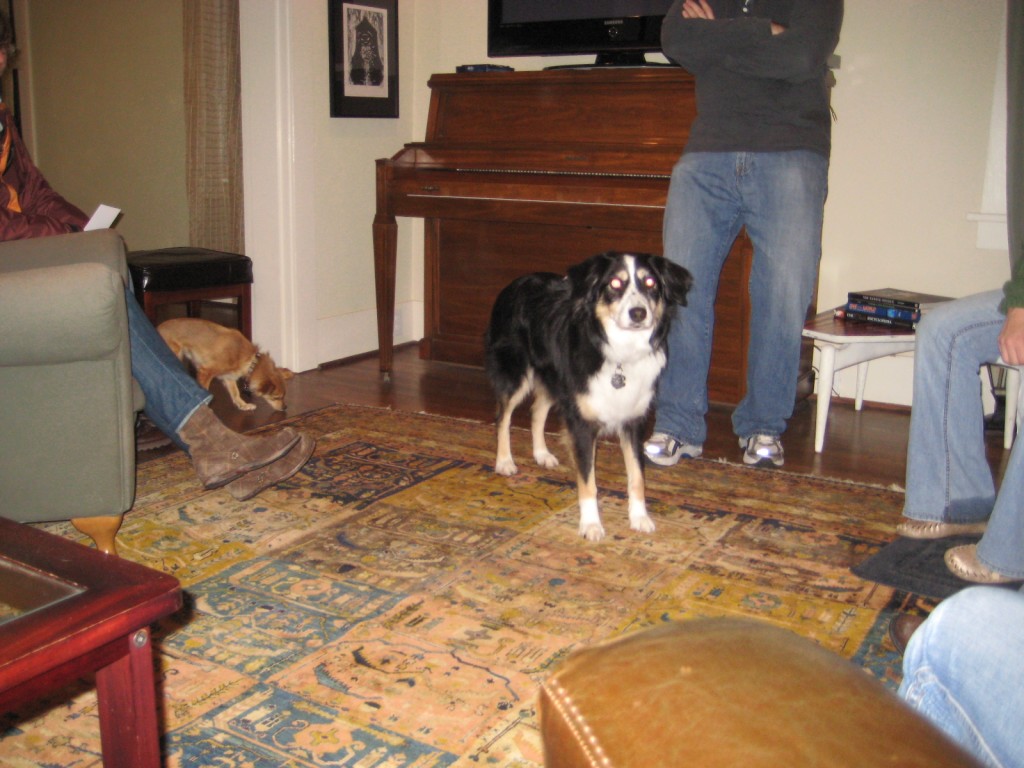 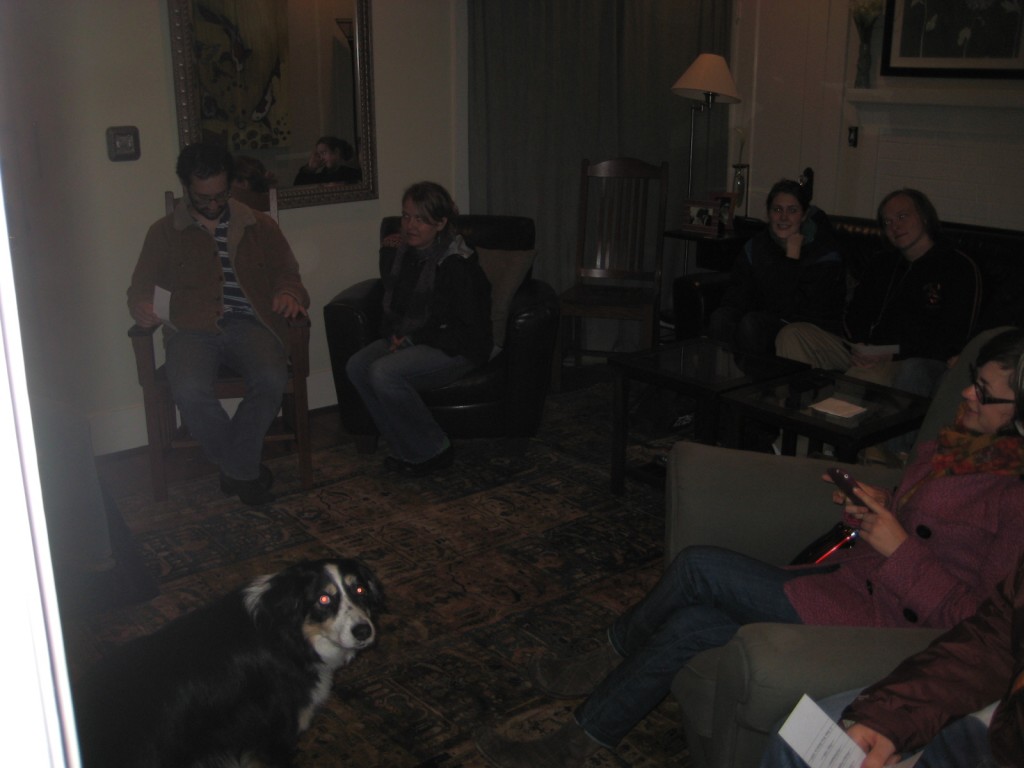 The DVD filled up a flatscreen television with our first film,Â  A Film About Poo. We literally learn what to (and not to) do with your poo, inÂ a Sesame Street kind of way (but with an English accent), including a creative and amusing little jingle about poo. Kind of charming.

Not so much for After You. A woman tries to leave her boyfriend but he finds her on the highway as she’s stuck in traffic. It turns out that he’s more into her cat than her. The audience gave zero laughs, and the reason is probably that it wasn’t funny. At all.

Wild Goose Chase was just a bit too silly for me as it seemed like a skit for Mad TV that never quite made the cut, although I hadn’t given that much thought to the game Duck-Duck-Goose in many years, or “DDG” as they call it.

Horn Dog was pretty entertaining, though again I’m not sure that it was right for “comedy.”

The Perfect Partnership was another submission from Rocket Sausage, and this one consists of a man in a business meeting playing a DVD for his wife which shows him as the CEO of the marriage. Although this seems outlandish, there is a little truth to it, as some people can’t quite remove work from real life.

The rap video Performance was pretty funny but it had Jon Lajoie written all over it. Good job rhyming “spandex” with “aero-dynamics.”

Man Talk just got annoying after a while and this film needed to be about three minutes long instead of eight. People in an office meeting speak in “parenthesis,” where they describe actions instead of talk normally, i.e. [two people approach each other] “Formal greeting.” [nothing happens] “Uncomfortable silence.” This goes on.

A Man Was Born in 1809 is a cute tale about a boy who found a tape he made in 1981 when he was twelve years old, where he sang a biography of Abe Lincoln’s life with animation showing the events. The song is off-key and out of sync, but we can’t really judge a kid from 1981 can we?

There were tons more films to see, homes to visit and people to meet this year at Couchfest but we simply didn’t make it out to each event. But the reports I got was that attendance was really good for this great idea of a festival.

I’m already looking forward to attending it again next year.

Ash Single B (Joy Kicks Darkness) Review Some Talk And a Lot Of Rock: An Interview With Propagandhi
Copyright 2009 - 2012
Randomville.com ™
All Rights Reserved - Photos Licensed by PR Photos