Film: The decade in review

So here we are, at the end of yet another decade. We figure that all of the other entertainment sources out there are going to have all of the “Best Of’s” for the past decade, but really, won’t they all have about the same answers anyway? Instead, Randomville is choosing to focus on what happened and how it happened this past decade. So we’ll be sporadically releasing stories reflecting on the past decade in music, film, comics, games and many other subjects in the entertainment industry. Greg Vernon is the Seattle-based owner of a visual effects boutique called Tinderbox (check out their trailer on their website…it’s fantastic!), specializing in 2D and 3D visual effects for features and television. Some of their projects have included VFX-heavy features (30 Days of Night: Dark Days), DVD sequels (Dr. Dolittle: Tail to the Chief), and TV Movies (SyFy’s Ice Twisters). At Tinderbox he produces jobs, wrangles budgets, bids shows, and manages client relationships — back and forth, between Seattle and Vancouver BC. This company has been around for six years and he’s been in the industry for fifteen years.

Randomville: I’m surprised that even though the economy is bad, these high tech visual effects films keep rolling out. Where do the budgets typically come from and are you surprised (and certainly grateful!) that this is continuing to go strong?

Greg Vernon: What’s good for Hollywood is rarely good for its vendors. This year has been the most profitable in history for Hollywood, capped recently by the biggest Christmas weekend ever. So that should mean that vendors such as Tinderbox are rolling in the dough, right? Far from it — Knowing that the economy is terrible and that shops are closing their doors, producers are pressuring their vendors to take work for far less dough than they would have made even three years earlier. Budgets have taken a nosedive, and unfortunately everyone from the union laborers who build sets to the lighting technicians who light them to the artists at Tinderbox who make the visual effects sing have had to do so for wages far below rate card. As the owner of a small business I can turn down the money we’re being offered, but there are five shops behind me who will happily do it for the lower dough. I know it, and the producers know I know it. A recent trip to Los Angeles revealed that this isn’t just about being a small boutique, but it’s happening to the biggest visual effects vendors in the industry by the biggest studios.

Rv: Besides Canada, are there other countries that are drawing people in your field to them with tax credits?

GV: Hollywood is in the business of making profits, and they couldn’t care less whether the guy cutting the green screens speaks English or Swahili. So the larger houses are setting up shells in Los Angeles and Vancouver, then shipping their shots across the water where according to a Canadian producer, they can get “Five Chinese to do what one Canadian will do for the same money.”

Rv: Do you feel guilty about doing work outside the U.S.? That’s kind of like out-sourcing isn’t it?

GV: As a part of the post industry (post-production), we’re about at the tail end of the job and frequently we’re among the last of the vendors hired for the job. We have no say where the work is happening – we go where the work is. We might get “atta boys” for opening a facility is Dubuque, IA, but we won’t get any work.

Rv: If it’s so easy for work to be outsourced, then what makes your company unique that keeps getting you more work?

GV: We’re not right for every job, but we’re exactly right for certain jobs. We try to find the clients we want to work with and we hope to let them know what we’re capable of so that they can make informed choices when we bid. As a boutique, our overhead is low, which means that we can take on jobs with tighter budget restrictions. At the same time our talent level is extremely high, so clients tend to see some value there. 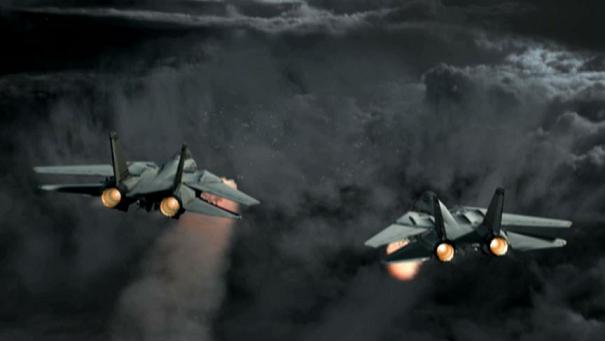 Some of the visual effects Tinderbox does

Rv: Any new projects you’re working on that you can talk about?

GV: We’re currently the VFX house on the sequel to 30 Days of Night, called Dark Days.

Rv: How long does something like Dr. Dolittle: Tail to the Chief take to make?

GV: Our window to the production world is a small one. We work in the post-production (“post”) pipeline, and the calendar we work off is typically just the post calendar. Whether we’re one of many VFX vendors or the sole VFX house, the length of time we’re on the job depends on the number of shots we’re hired to do. Moreover the complexity of the shots dictates how much time those shots will take – one show’s 100 shots might take the same amount of time as another show’s twenty shots.

In the case of Dr. Dolittle 4, we were doing just a couple sequences with limited shot counts so the work went pretty quickly – just a month or so.

Rv: I’m assuming that the technology is always advancing in your line of work. How do you keep up to date with this?

GV: A combination of engineers who work for Tinderbox, the press, and the vendors who sell us our equipment keep us on the cutting edge of technology.

Rv: Do you get more wrapped up in story lines or special effects when watching a film for leisure?

GV: Oh I am a movie fan. When I’m in the theater I get completely wrapped up in the show and I hope to be taken completely out of reality for a couple hours — just like every other movie fan. Chances are if I’m wrapped up in the quality of the visual effects either they’re not very good or the movie itself isn’t holding my attention.

Rv: What changes do you think will happen (or you would like to see) in the film industry in the next ten years?

GV: I’d like to see more films by small filmmakers that get attention because they are good stories told well. Paranormal Activity is one of my favorite movies of the year for this reason, as well as for the fact that it kept me on the edge of my seat. I’d like to see the studios take chances on small shows like Paranormal Activity because I think the audience has proven that you don’t need big names to sell tickets to a good show. Of course the most important part of that equation is that the audience stops spending its well-earned money on Transformers 12 and instead tries out Up In The Air or The Hurt Locker. There’s some beautiful visual effects work in The Hurt Locker — exactly the kind of work I want to do.

Rv: What were some of the best visual effects films of the past decade or maybe the more over-rated films?

GV: The best visual effects films of the past decade to my eyes were Children of Men and Pan’s Labyrinth. [The Curious Case of] Benjamin Button was also an incredible achievement. Otherwise we’re in the midst of over-rated right now, swimming in the swill of VFX-heavy debacles that have little or nothing to say in terms of story but which spend ludicrous amounts of money to hire VFX teams around the world to produce two hours of visual noise. There are countless examples of this, but among the most egregious are the Transformers shows, GI Joe, and most of the toy-related promo pieces. The Lord of the Rings movies, District 9 and The Dark Knight showed that you can have whiz-bang visual effects and still tell a story but for the most part those are diamonds in the rough. Avatar is just a case of embarrassing hype, but I will say it’s the best outer-space version of Dances With Wolves I’ve seen so far.

Rv: Any advice for an inspiring individual who wants to get into your field? Do they need to start out by working at a video store like Tarantino?

GV: Anyone who wants to work in this industry has to want it enough to make some serious sacrifices — meeting people in the industry, following them around, volunteering to do grunt jobs whenever possible, taking on free internships and working under the most grueling conditions for the lowest (or no) pay until catching the attention of the right person.