Games: The decade in review

Hi, I’m JB Bonifacio, alias DC y0ur m4m4, and I like video games. I’ve been playing since the tender age of six (going on twenty-one years now) and I’m proud to say that the state of video games today is not where gaming was ten years ago. Ten years ago, the video game industry didn’t make more than the music, movie, and sports industry COMBINED. Ten years ago, there wasn’t a cable channel dedicated SOLELY to video games. Ten years ago, females didn’t comprise the MAJORITY of gamers on a single game, let alone the biggest online RPG available, World of Warcraft. Ok, I’m exaggerating a little on the last hyperbole, but when said game is purported to host over 400,000 unique female game players as of last year, I’m amazed nonetheless. 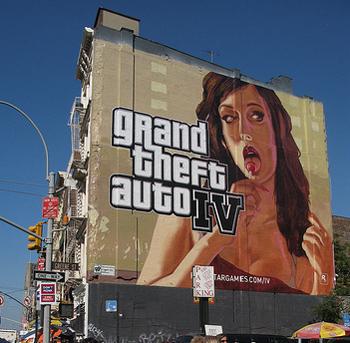 Nowadays, video game billboards are as common as billboards for movies and music.

Over the next weekend of early Saturday lunches at Genki Sushi and evening Facebook message threads, I preceded to poll my gamer friends, all of whom are a good mix of hardcore and casual video gamers in their own right, about various trends, topics, and opinions concerning video games in the 21st century. We’ll try to refrain from being too geeky and pretentious…Who am I kidding?!? This is about to get extremely biased…Sorry.

Before we begin, some background information on some of our gamers. 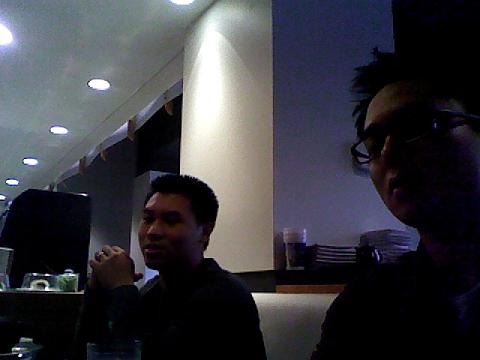 BuyYouaSpoon and DC_y0ur_m4m4 (pictured left to right) eat some sushi and talk games.

JB: Question 1) Apart from the Gambling Industry and the Adult Entertainment Industry, Video Game Industry Earnings far eclipse that of other mainstream industries such as the Movie or Music Industry. What does that mean to you guys? Earnings wise, I think it’s weird for gamers to be associated with pornographers and gambling degenerates as the top three consumers in the entertainment industry. I think that’s kinda awkward. I actually looked up the numbers: in 2007, the Adult Industry & the Gambling Industry both grossed more than $90 billion in earnings, whereas the Video Game industry earned relatively less than them with approx. $30 billion dollars —

Denis (interjecting): Well, the movie, music, and sports industry, by comparison, only grossed anywhere from $5 to $7 billion dollars.

Bernie (A seventeen year old gamer wunderkund from Olympia, Washington, also had this to say: (I did most of my economics papers on the video game industry). I don’t find it surprising that video games are the most used/popular because you get the most out of them. Movies are on average $10 for about two hours of entertainment. Music can be played-over and over again but gets dull listening to the same lyrics. But video games cost roughly forty to sixty dollars. And good games can entertain for 100+ hours.

Victor: However, I think the constant between the three industries is that video games are a selfish enjoyment, like a guilty pleasure, or private sin. If people didn’t feel self-conscious to engage in sports, music, movies by themselves, they’d probably be bigger industries.

Tim: Actually, I think this is a good thing for the video game industry because it adds legitimacy to this form of media that we’ve embraced.

JB: But do you really think Video Games ARE getting legitimate? If we follow this line of logic, Gambling and Pornography should be even MORE “in” and MORE accepted.

Tim: Yeah, I don’t feel that way at all; again, video games don’t have that same degree of moral stigma as pornography or gambling. However, I guess that when you introduce Mature-rated video games into the mix….

JB: Look at Call of Duty: Modern Warfare 2 (First-Person Shooter available on both PS3, 360, and PC), the seemingly biggest-grossing title of 2009; it features a sequence early on in which you participate firsthand in an act of terrorism which involves wantonly annihilating and executing the virtual men, women, and children of an entire Russian airport — 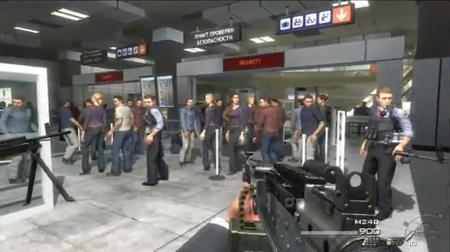 Tim: Yes, the “No Russian” mission, which drew a lot of attention from both video game and mainstream media. On the other hand, you can have a film or piece of music, both of which are more legitimized forms of media, and people pay considerably less attention to it.

Denis: But people DO get offended nonetheless. Modern Warfare 2 is in fact banned in Russia because of its content.

Tim: Yeah, but how many MOVIES are banned with the same level of scrutiny?

Denis: The weird thing is that the rest of the world is more comfortable with sex and violence in the media—

Tim: The exception, of course, being video games, in which case, critics foreign and local reserve an extra layer of scrutiny.

Denis: Yeah, critics assume kids will pick up these titles and be affected by them.
JB: Question 2) Can video games be considered Art nowadays? Give examples and Why.

Victor: Well for starters, Art is about creativity, which video games have in spades.

JB: Bioshock or ICO or Shadow of the Colossus were three titles that transcended the typical gaming experience. Those were the more recent games in memory where I first got the idea in my head that video games could & should be considered as a mature art form, capable of invoking serious intellectual & philosophical thought. 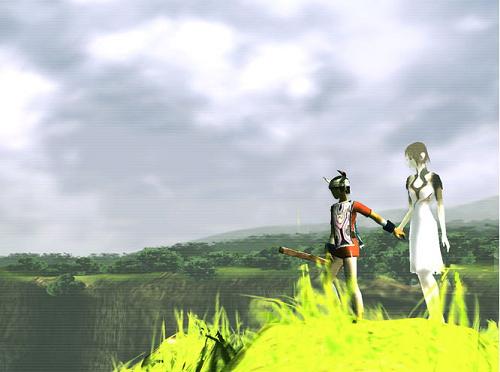 Tim: Well regardless, you have to define video games as art because the culmination of its individual elements, such as writing, graphics, music, and game play, all serve to tell an immersive story, which is what art should do.

Don (twenty-one year old gamer who has his own list of artful video games): For me, it was all about Halo, the first person shooter that brought back the intensity and competition that the days of Goldeneye for the Nintendo 64 once had. Halo boasted a real story that was well written and told. Gameplay was flawless as countless LAN parties and tournaments were held frequently. Kingdom Hearts is also another great game that combined the world of Disney and Squaresoft (RPG giants of the Final Fantasy series). It was ingenious as it was able to combine elements that everyone was familiar with, thus broadening its audience of all ages. Metal Gear (a tactical espionage action-adventure title) is also another game that owns the award for graphical superiority.

JB: Okay guys, what about Braid (third-person platformer for PC and Xbox Live Arcade known for its time-travel game play mechanics & satire of the Mario motif)? Let’s talk about Braid. 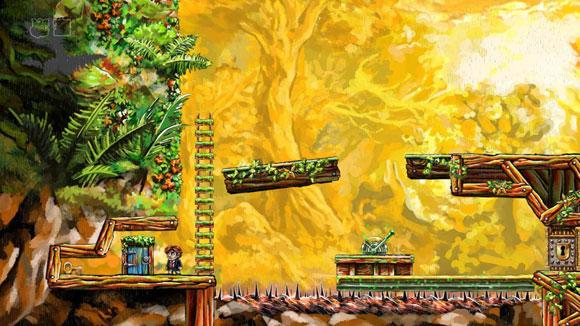 2008's Braid, developed independently for the XBOX 360, has been considered a masterpiece, and was highly praised for the unique puzzles it presented. (image courtesy of www.wikipedia.org)

JB: Yeah, Braid is on my all-time list of favorite video games, simply because of how they incorporated the time traveling game play mechanic to narrate the ending (spoiler alert: the “Princess Toadstool” of this piece flees in terror from the game’s Mario-like figure, who is revealed to be a disturbed stalker…yeah). And it all goes back to the story. Story is the thing by which I define a game as artful or not.

Tim: True, but I wouldn’t be so quick to associate a quick emotional response to a game as artful.

Gerald (another Seattleite and hardcore video game fan offered this rather artful analogy): Only difference between a painting and a video game is instead of a canvas and paint, the artist has a computer and the unreal engine.

JB: Question 3) How do you guys feel about developers putting more of an emphasis on casual games, which is what is attracting non-gamers (i.e. families, young toddlers, and females), and at the same time, alienating die-hard video game fans who have come to expect more provocative substance and complex game play from their product?

Denis: It’s definitely a double-edged sword. True, casual games, games geared toward non-gamers, are the top games that are selling, but those are the ONLY games that Nintendo is making a profit on. They’re pushing a lot of other games that are equally family-friendly but overall are mediocre and crap by comparison. As a result, the average Wii owner will purchase maybe two games a year, whilst owners of the PS3 or XBOX360, systems more synonymous with hardcore gamers, will purchase about eight games by comparison.

Tim: Well what Nintendo is doing is introducing more “plastic,” so what you’re getting is more plastic instruments and gimmicks that clog up our retail stores rather than inventing new ways of introducing complex games to a mainstream audience. And now, the industry people are seemingly swaying more towards family-oriented content as opposed to something with more substance. Shrewd business acumen has stifled creativity. 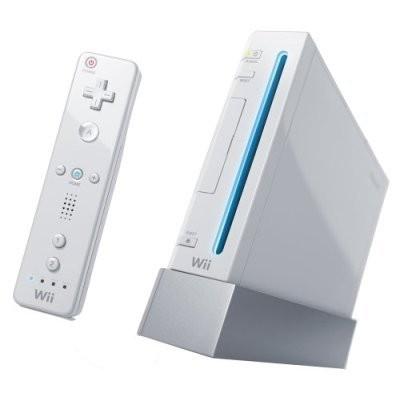 As of December 2009, the Nintendo Wii leads the generation over the Playstation 3 and XBOX 360 in worldwide sales. (image courtesy of www.paprikalab.com)

Gerald: The hardcore fan just needs to speak out a little more or not be a sucker for these games and hit em’ where it hurts the most by not buying the games

JB: Question 4) Do you think attitudes towards gamer culture have softened in the last ten years?

Tim (confidentially speaking): Yes. I think it’s definitely softened. I remember when it was back in the day that video games got automatically classified as merely a kid’s toy, and now you have celebrities endorsing them at video game launch parties. I mean, Robin Williams named one of his daughters “Zelda.” And of course, I married my wife, who knew I was a gamer from the get-go.

Victor: Absolutely. I think that attitudes towards gamers have softened, because you know some of our lady friends are actually really into Guitar Hero. Granted, it’s the only video game they’ll ever play, but still, it IS a video game. It’s not Gossip Girl (laughs). I feel like the ones that talk shit about gamers are the ones that were shitty at video games and that’s their defense mechanism. 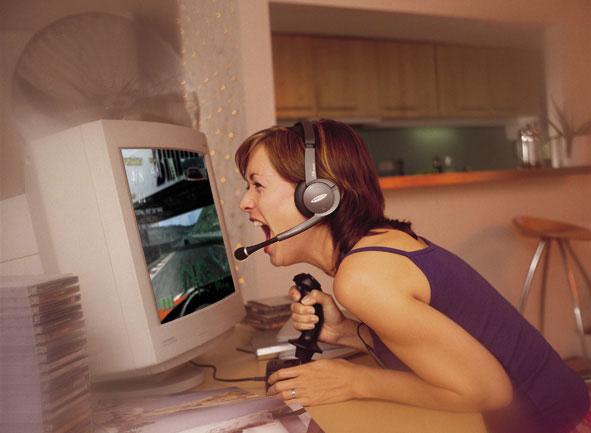 With the growing popularity of gaming amongst women, the old line “you were beat by a girl” suddenly takes on a whole new meaning. (photo courtesy of news.gotgame.com)

Gerald: But at the same time, I feel there is still the scapegoat feeling towards video games no matter what. It sucks when you see crimes and shit happen on the news and the news trying to link it to a video game. “Five year old dies from jumping off roof. Parents blame Super Mario for teaching kid how to jump,” as an example.

Victor: That I kick ass at virtual golf, but not real golf (laughs). But, yeah, it’s my opinion that video games should not be played by someone with an addictive personality, like uh, myself (laughs). I think that is why I’m afraid to invest more into it because I would seriously just tweak out. That being said, I don’t deny that video games have the ability to hit you, much in the same way people are passionate about books or movies.

Denis (referring to the abundance of obnoxious online gamers): I learned that ten year old kids can be really mean. 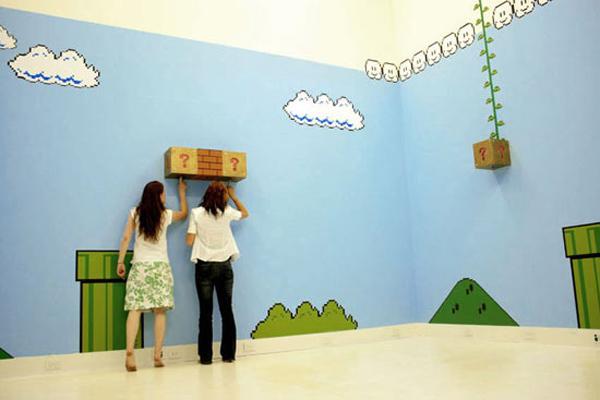 Gerald: Two things I learned from Super Mario Brothers: “If you reach for the stars, it will make you invincible” AND “Sometimes, you can work your ass off only to realize your princess is in another castle.”