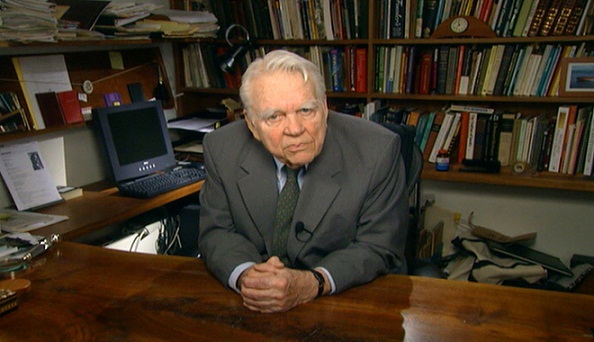 For years I have thought about having to write this article. To be honest, I always figured that if I were to write an article about Andy Rooney leaving the CBS show 60 Minutes, it would be because he died. He is 92 years old after all. Some might be cruel and joke that he has been dead for years, but Rooney is still alive, and thankfully he chose to retire from the popular news show that he has been a part of for the past 31 years on his own. He wrote nearly 1,100 essays for 60 Minutes. He was one of the youngest journalists in World War II. He joined CBS in 1949.

Andy Rooney is as American as meat and potatoes. The show 60 Minutes in itself is similar to an American dinner. The first segment is often on the biggest political topic of the moment. The lead story. The meat. Next comes a story about perhaps an environmental issue or something new in technology. The potatoes. Third comes a story about an entertainer, such as a famous actor or musician. Dinner rolls, or green beans; whatever mom made that night. And finally, the show ends with the wit, satire, comedy, creativity and brutal honesty of Rooney’s two to three minute segment. The dessert.

Rooney’s segments have a sentimental connection for me. I grew up in the Midwest, where dinner is quite often served at about the same time each night, at the same table, and it quite often consists of the same combination of food, hence the meat and potatoes reference above. Every Sunday night, my grandparents would have 60 Minutes on in the kitchen, their small television (black and white in my younger years) resting in between them on a small table. As a kid, I pretty much ignored the first two stories because what kid cares about politics, technology or environmental issues? Depending on the entertainer, I might pay attention to story number three. However when it was time for Rooney, it was full attention. “Let’s hear what Andy has to say tonight,” my grandmother would say.

“Uh-hmm hmmph,” my grandfather would chuckle with Andy with his mouth closed as he would be enjoying his dessert by then, usually cookies dipped in his coffee cup or cinnamon graham crackers with apple butter spread on top of them. My grandmother would agree and laugh along too, or say “Isn’t that the truth?” When Rooney’s segment would end, a common phrase for her would be something like “That Andy, isn’t he sumthin?”

Okay, yes this is an old fashioned theme, and Rooney is certainly old fashioned. I’ve been mocked by friends for years because I like watching Rooney and I enjoy his contributions to the show. Comedians have mocked him relentlessly, and letters have been sent to CBS for decades asking for his removal. Bobbi Tidwell in Seattle says, “He’s a crusty old coot and has a crappy attitude about anything younger than him. He needs to retire!”

She might be right based on this segment where he admits he’s out of touch with popular music, however he makes a good point at the end about Ella Fitzgerald:

“The last few spots I’ve seen have been painfully dull monologues about random items he found in his mailbox or desk drawer… I respect that the full body of his work is hard to sum up in a few sentences, and I’ve seen many of his spots that made great points about American social and political issues of the day,” says Bryce Milton of Seattle. “However for me personally, the low signal:noise ratio of Andy’s monologues turned me off. As did the factual liberties he took with some of his more lively monologues.”

Milton went on to dissect the following rant that Rooney made about Bill Gates:

Even though Rooney is a very honest person, it’s well known that his segments are filled with satire, much like his clip on Gates. An important thing to be aware of is Rooney’s ability, like any good comic, to highlight the everyday things that are happening around us. He has a gift of pointing out what we don’t always think of, but when we look back, we go “Ah yes, that’s a good point. I hadn’t thought of that.” Perhaps Jerry Seinfeld got some of his “What’s up with that?” ideas from Rooney?

In certain ways, George Carlin (my favorite comic of all time) was like Andy Rooney. Though Rooney certainly isn’t profane like Carlin was, he makes you think. Rooney says things like, “Shouldn’t February be spelled F-E-B-U-A-R-Y based on the way we all pronounce it?” “I’m a conservationist who uses a lot of our oil and trees. I mean, I’m our problem.” A statement like that proves that he is not only honest (and a hypocrite like all Americans), but it’s also a statement that we all don’t think about on a daily basis, even if we should. In the same context, Carlin would talk about things like how ironic it is that people will reach into a loaf of bread bag, lift up the top two pieces, reach for pieces further down, then put the top two pieces back on top.

“When I was in my early twenties, everyone wanted to be a rock star or a millionaire or a movie star. I wanted to be Andy Rooney,” says Edwart T. Martin of Chicago. “Andy always told it the way he saw it, didn’t apologize for what he said (unless he truly had made a mistake) and was one-of-a-kind. In a television news world that has become more commentary and opinion than news, Andy was the one and only light of common sense and humor shining through the drudgery and muck of modern-day “journalism.”

Rooney did make mistakes though. Through the years he hit the hot seat at times for use of the word Negroes. And in a famous bit, he talked about how women want equality in the work place and don’t want to be seen as sex objects, as he flipped through a newspaper that had ads with women in bras and swimsuits on every other page.

Truth be told, I’m not always one for change. I’m a Scorpio. I won’t complain if someone wants to implement change of some sort, but left alone, I will often do the same thing at the same time each day. I never move my furniture around. My morning routine is identical each day. When I find something that I like, I tend to keep doing it and not fix the wagon that isn’t broken.

I also like traditional things and I’ve been told I’m an old soul more than once. Sure, I enjoy Bill Maher and Jon Stewart, though I rarely ever see either because I don’t want cable television, but I’ll take Andy Rooney over both of them any day. I prefer a Charlie Chaplin silent film over Pirates of the Caribbean or any Disney animated film. I’m still scratching my head wondering what people thought was amusing about Napoleon Dynamite. I’ll take The Three Stooges or Abbott and Costello if I want to laugh. And yes, I’m 34 and not 64.

Liking Andy Rooney or not is a classic case of young vs. old. I’m probably a rare exception, but I’m certain Rooney is more liked by people 50 and over, vs. folks under the age of 50. With that said, the number of people under 50 who actually watch 60 Minutes on a television on a Sunday night is rapidly declining too, hence the change. “It takes aging to get to Andy’s level of understanding of the world,” says Martin. “You have to experience life, to have successes and failures (lots of failures), both on your own and as part of a group, to have the Andy Rooney perspective. I am only now coming in to my own as I quickly approach 50 years of age.”

I suppose I’m looking at this a little deeper in that Andy Rooney retiring is the further demise of an era. He was one of the originals left from an era where television, radio and newspapers were the main sources of information. Today most people watch television for “reality” shows (and don’t get me started on that…); when was the last time you tuned into the radio for the latest news?; and we all know newspapers are going away. Most of us go online now for our news and information. I fall into these categories as well and I’m thankful the Internet allows me to pick and choose how I want my information and from where. But I still like the old-school things at times too.

I remember when Johnny Carson left the air. I vaguely remember M*A*S*H ending and I was too young for Walter Cronkite, though I imagine this is similar to what that was like. Depending on how you look at it, Andy Rooney might have “burned out” instead of “faded away.” But like him or not, I feel the man deserves respect for his work ethic. He worked until he was 92 doing work that he enjoyed. “Being set in my ways is what I do for a living,” Rooney has said. Perhaps there is jealousy among us towards Rooney for that.

This Sunday I have requested to my girlfriend that our day-hike be cut a little short as there is no way I want to miss the final episode of 60 Minutes, to see the final segment of Andy Rooney. I will hear, “And now, a few minutes with Andy Rooney” for the last time. There on a couch, she will likely roll her eyes as I might have to hold back tears.

But I see it as the end of an all-American original. A piece of history is coming to an end. And a piece of my childhood will be coming to an end as well. The Andy Rooney segments on 60 Minutes have been one of my favorite things in life for many years. I’ve had other favorite things come to and end and I’ve been forced to embrace that change. Life moves on.

Like those other favorite things of mine that have come and gone, I won’t bitch about Andy Rooney being gone, but I will still miss him.

I’m just set in my ways.

Andy is pretty spot-on about reality in this segment: