It was one hell of a HONK! Fest that was just held here in Seattle. What is HONK! you ask? If you missed our coverage last year, it’s a massive coming together of marching bands, drumlines, dancers, and various vaudeville and carnival inspired commotion in the city streets. This third annual festival of street fairs was inspired by the east coast version which originated in Somerville, MA, five years ago. The entire festival is 100 percent volunteer organized and managed and completely free to the public—donations are highly encouraged however. 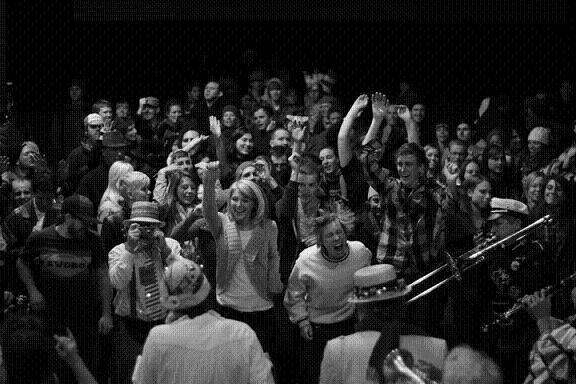 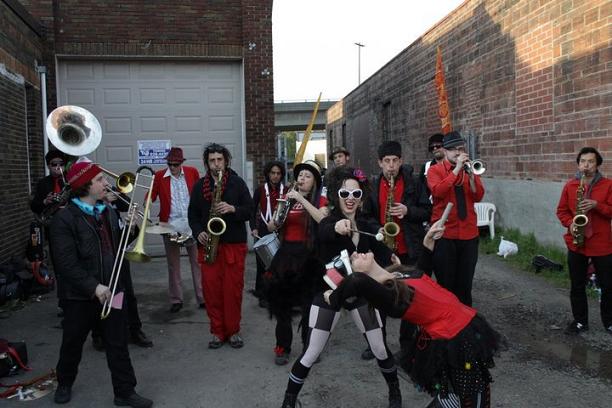 This year’s HONK!—which took place April 9-11—found men, women and children of all ages frolicking in the streets, spinning and stomping in splendor and sunshine to the brasstastic sounds of over 20 bands from across the U.S. and Canada. The festivities kicked off in Fremont on Friday evening and made way around the city for performances in the Central District and Georgetown on Saturday and rounding out the weekend in West Seattle on Sunday. 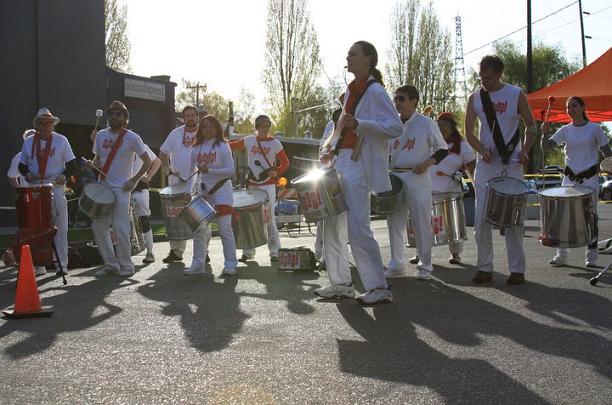 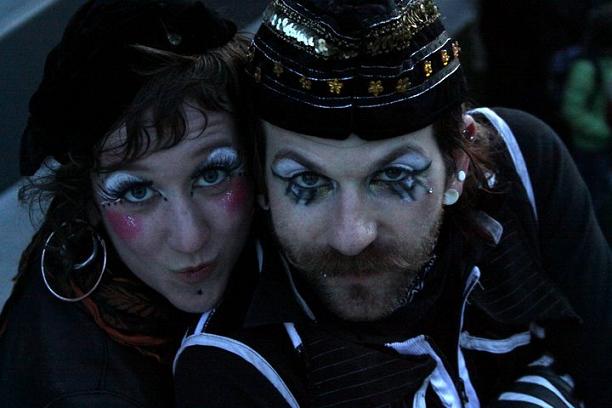 While most of the bands performed multiple sets in each neighborhood, there were special cameos at each block party. March Fourth Marching Band out of Portland, was one such cameo; making only one appearance to kick of HONK! Fest in Fremont. They drew quite a crowd and started things off with a bang! Other cameos included Seattle Seahawks Blue Thunder Drumline on Saturday night in Georgetown and on Saturday afternoon in the Central District I was pleasantly surprised to see Seattle’s Caribbean steel drum ensemble, Bakra Bata. Their tropical flavor was a nice contrast to the more prominent marching band vibe. 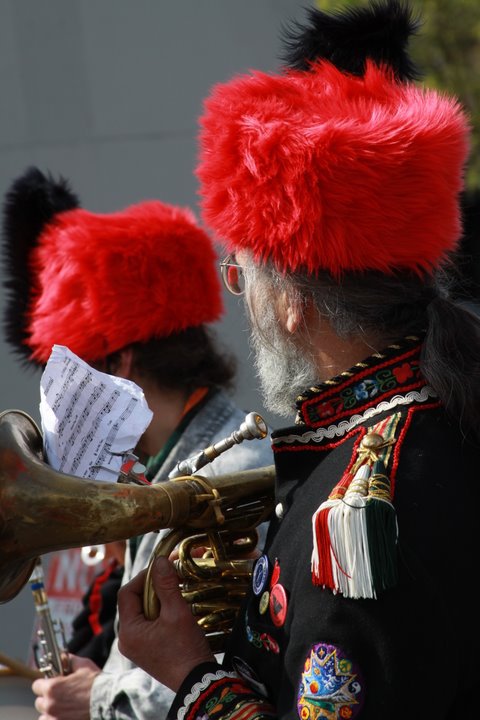 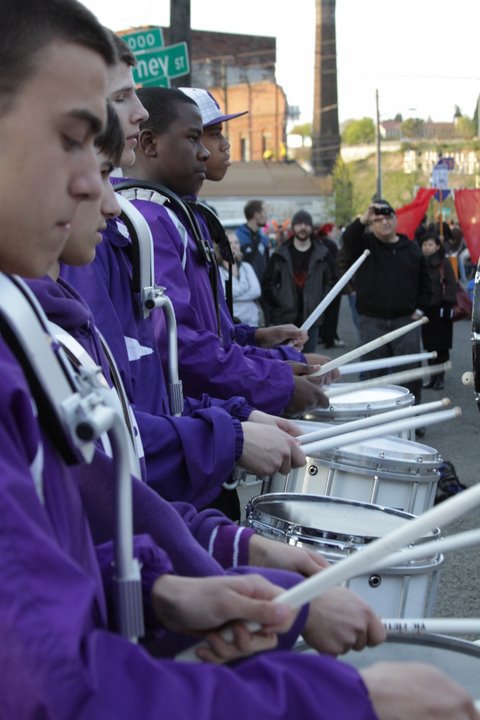 The HONK! atmosphere does take some getting used to. When you’ve got four or five marching bands honking and pounding away within 50 to 100 yards of each other, it can be mind boggling trying to keep your ears (and brain) focused in one direction. But once you set your mind to one particular performance, the HONK! spirit most certainly envelopes you and gets your body moving. The all contributing vibe is intoxicating. Many folks brought their own percussion instruments from home to join in the fun—which is highly encouraged by the performing bands. To put it in the words of the HONK! organizers; “There is a rich community ethic amongst many honkers, who use their music to erode the barriers between professional and novice, and between audience and performers.” The more the merrier was definitely the theme for the weekend. It was common place to see members from various bands joining in with bands that weren’t their own. HONK! Fest fosters a family-like connection through music and the extended family of musicians that come together for the festivities quite obviously love playing music together—and it’s contagious. 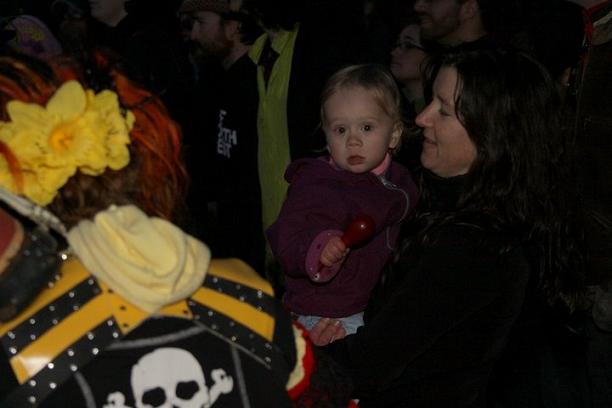 This baby's got the right idea! 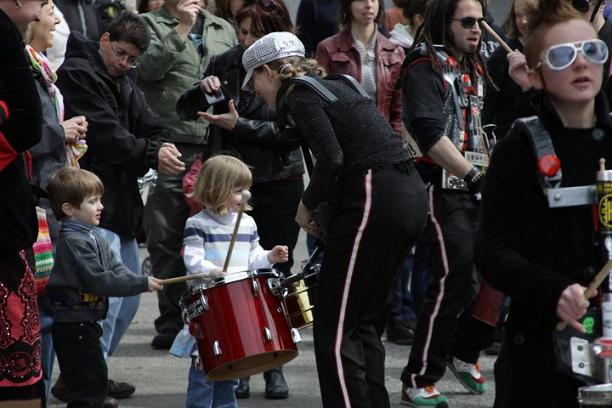 The lineup included all manner of marching bands from Samba Ja, out of Eugene—a thirty-member percussion ensemble playing funky earth shaking beats—to Emperor Norton’s Stationary Marching Band from Somerville, whose sound evokes a vaudevillian excitement mixing genres of Klezmer, Balkan, and jazz (among others). Their first studio album, Reign of Revelry is set to release May 14. 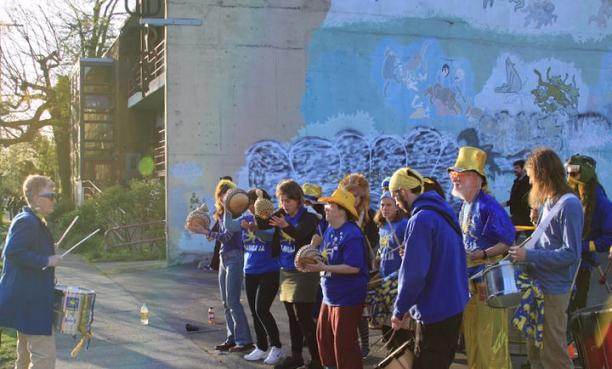 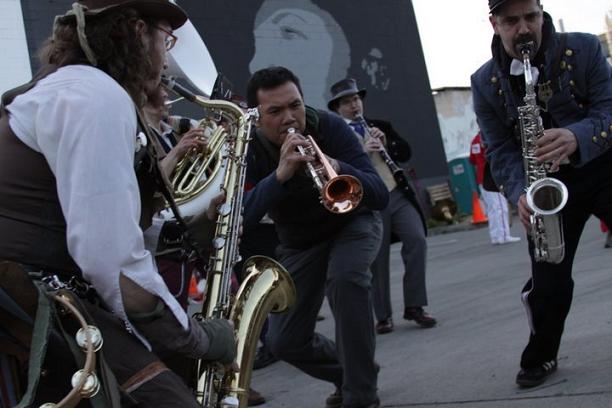 Also on my favorites list was Minor Mishap Marching Band from Austin. Their sound is a mash-up of New Orleans Dixieland jazz, Klezmer and Russian folk. The charisma and energy is bubbling over in this black and yellow clad cast of characters and the conductor plays a melodica. How often do you see one of those outside a reggae song? Environmental Encroachment from Chicago rocked the streets in wild furry costumes. Every band member had ears of some sort on their head. They were, for sure, one of the funkiest bands there. From Afro, Latin, funk and Dixieland, their sets were complete with folks performing circus feats, hula-hooping and an awesome rendition of Radiohead’s National Anthem. The other funk masters on the HONK! roster were the Beat Crunchers from Eugene. I was lucky enough to catch their set Saturday night at an indoor club venue, which seemed the ideal way to hear the emcee busting rhymes over some Afro-Brazilian-funk dance party rhythms. 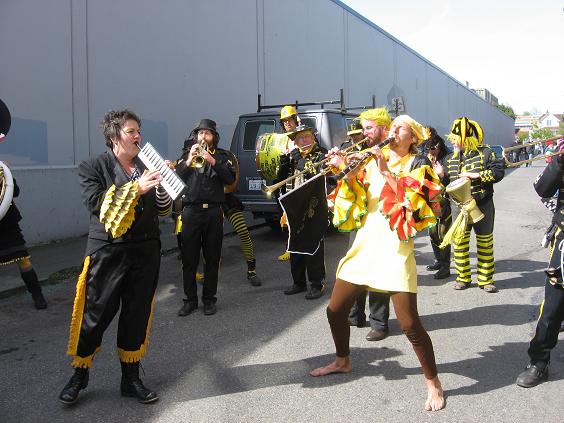 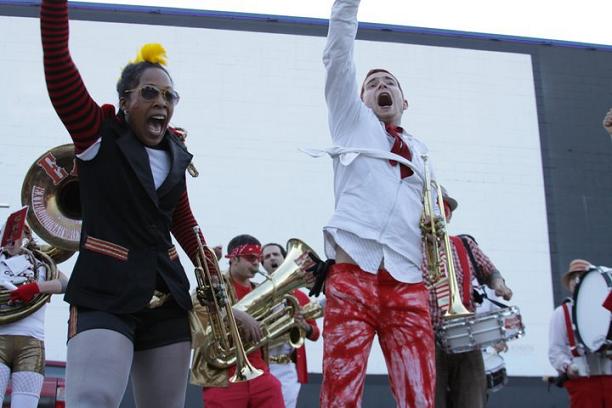 And taking the prize for farthest from home was Extraordinary Rendition Band all the way from Providence. Aptly named, this group plays all ranges of cover songs from Smooth Criminal to When the Saints Go Marching In. Lively and animated these cats like to boogie. And last but not least, my favorite hometown band at HONK!: Titanium Sporkestra. Their drum heavy sound is so lively and crisp you’d have to be dead not to move in unison. The explosive music is like a circus colliding with a rock marching band. They do a badass cover of Black Sabbath’s War Pigs and all the drummers (7 in total) have sporks and utensils adorning their drum harnesses—get it? Titanium Sporkestra! 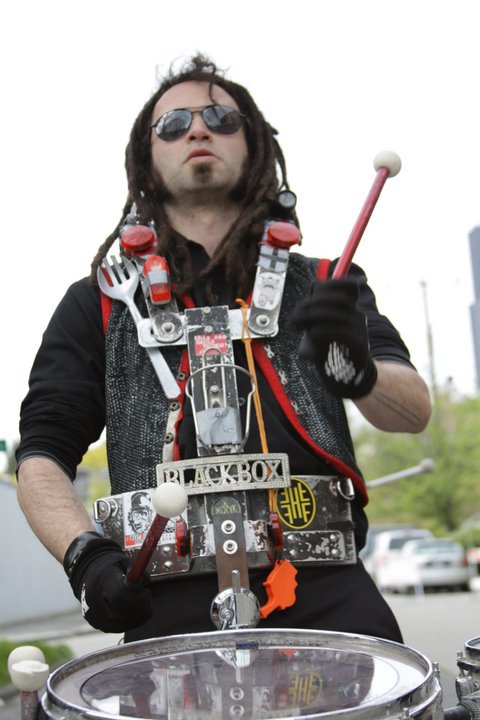 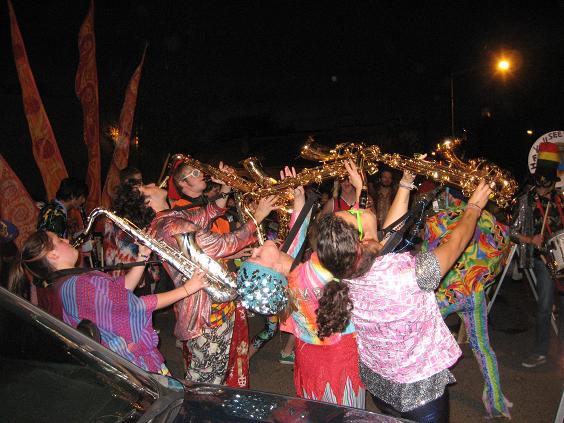 Saturday night was for sure the weekend highlight. By that point you could tell that all the honkers had fully honed their sound and the bonds between bands were in full bloom. After things were supposed to have wrapped up, you could wander the streets and encounter spontaneous jams with varying band members and plenty of dancers. Interrupting the jams long enough to mobilize the music making masses to the official HONK! after-party was a feat in itself. The party—advertised to bands and volunteers only—was a loud, sweaty, massive menagerie of merry noise making (indoors and out) at a warehouse in south Seattle nicknamed the Hazard Factory. The place looked like a huge garage with tools and such hanging everywhere. And out front, a flaming tetherball game that was played using tennis rackets—strangely entertaining. 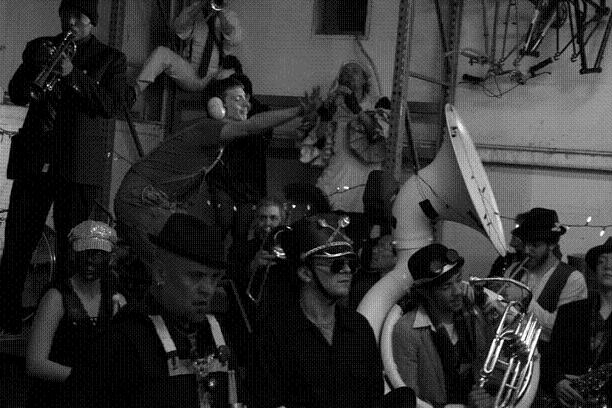 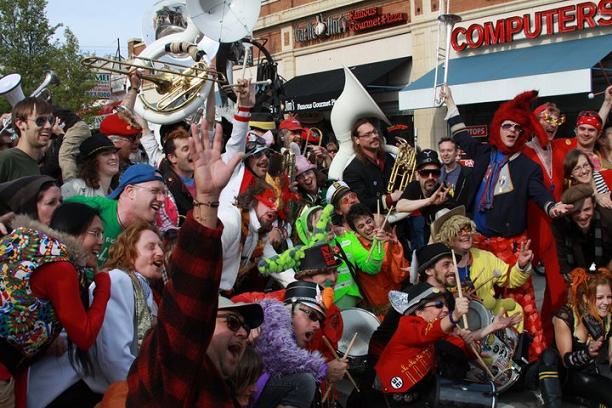 Still riding the HONK! high after the festivities wrapped up in West Seattle on Sunday evening, an impromptu HONK! jam at the Space Needle was organized by members of Extraordinary Rendition Band. Members from Minor Mishap, Yellow Hat Band, Emperor Norton and others (around 30 people total) showed up for one last honk to close out the weekend. The group marched around Seattle Center spreading the spirit of HONK!. While making music they boarded the Tornado ride in the Fun Forrest, serenaded a newlywed couple, played the birthday song for a random kid who had his own dance party, joined a vigil to Free the Hikers in Iran and descended into the fountain for a finale frolic. It was a fantastic spectacle and even made the 11 o’clock news. 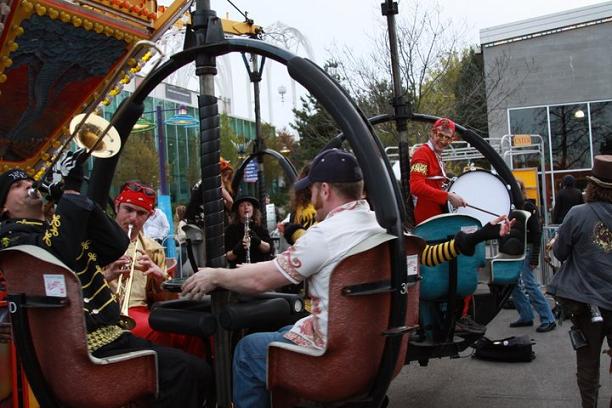 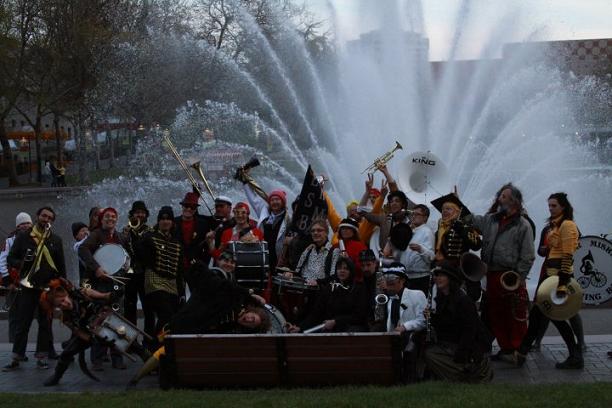 Bummed you missed out on HONK! Fest West? Well then, head to the other HONK! Fest in Somerville this coming October. Many of the same bands participate in that HONK! as well. Or mark your calendars for April 2011, the fests are exactly six months apart. 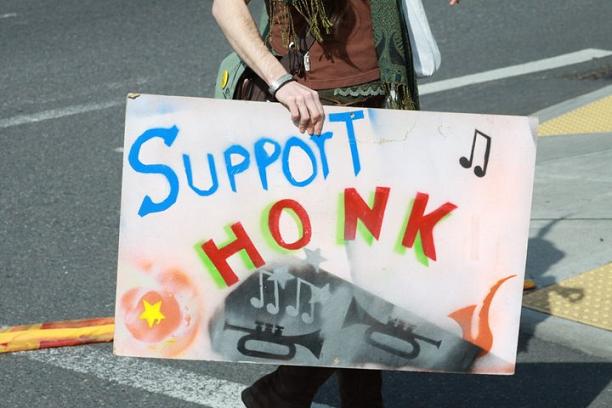