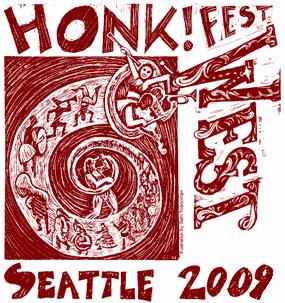 Well, if you live around Seattle, this weekend you have a chance to bring yourself up to speed a little bit during Honkfest West 2009.

If you don’t live near Seattle, there are two things you can do.

1. Come back to this story throughout the weekend as I’ll post some updates and pictures.

2. Try to get a Honkfest started in YOUR neck of the woods!

Very impressed with the performances from this first night as I had no clue what to expect. My cousin and I walked all up and down Ballard Ave catching musicians in venues, spilling outside of venues, and into the streets.

A littleÂ  too tired tonight to post videos and pics, but I’ve got plenty of both and I’ll hook it up tomorrow.

Great job throwing this event together!

I’m not going to be able to make it to Honk!Fest today, but I’m going to try to swing by one of the two big events tomorrow.

Last night we started at Mr Spots Chai House. Have you ever seen a high school marching band packed into a chai house? Well, me neither until now. Yes, it was loud, but the kids of the Garfield High School Bulldog Drumline were having a blast, as was the crowd spilled out of the place and watching from the sidewalk. 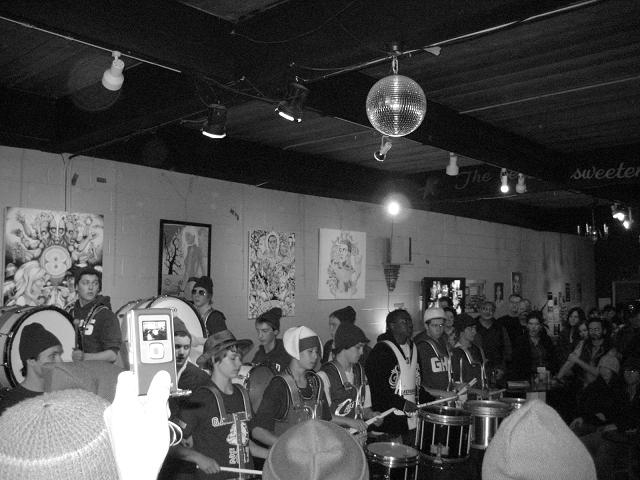 They were just starting to belt out “Poison”Â  by Bel Biv DeVoe when we walked out the door.

Then we scooted over to the Sunset Tavern, which was playing host to the California group Hubbub Club. A little more jazzy and spruce, you have to remember there were no vocals at this festival….all instrumental. But watching thee Hubbus get down to “Paint It Black” by the Rolling Stones was great and they eventually moved the show outside and then up the block to the street corner. 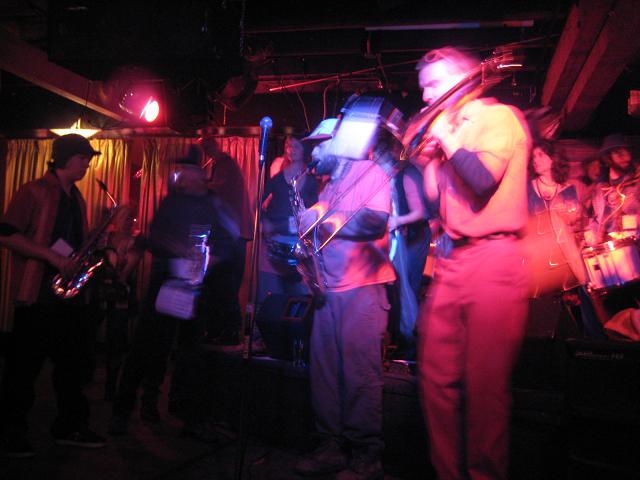 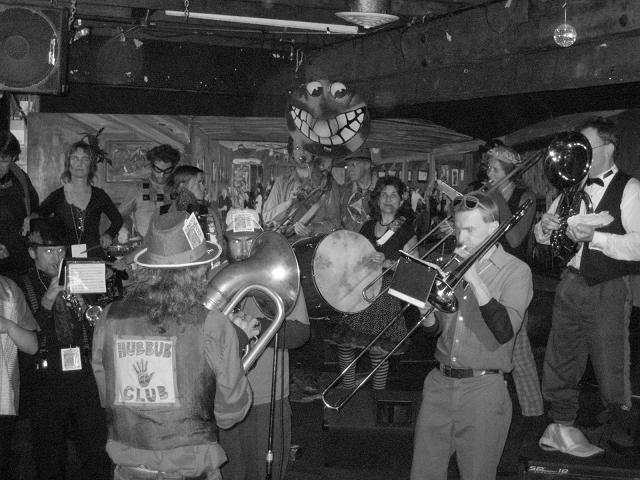 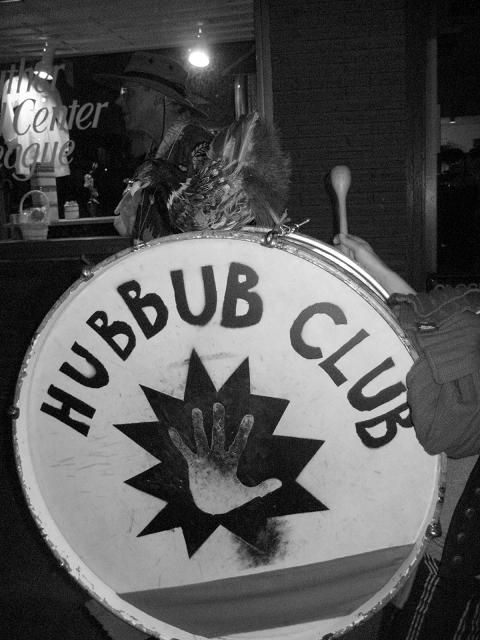 When we left the Sunset to head down to Connor Byrne Pub, we ran into the Garfield High kids again out on the street and they had a huge crowd blocking traffic in the street to watch them perform.

By the time we got down to Connor Byrne, there was a dualing chaos happening in the road. On one side of the road was the localÂ Anti-Fascist Marching Band (who were not scheduled to perform last night) attracting a crowd, and on the other side of the street was Oregon’s Samba Ja, who were doing their thing after gravitating out of the Pub.

The Anti-Fascist crewÂ had a real Mardi Gras-ish partyÂ going onÂ though, and a guy in bunny ears at the end of the second video sure thought so!

Recession be damned! There was a lot of dancing and partying in the streets!! 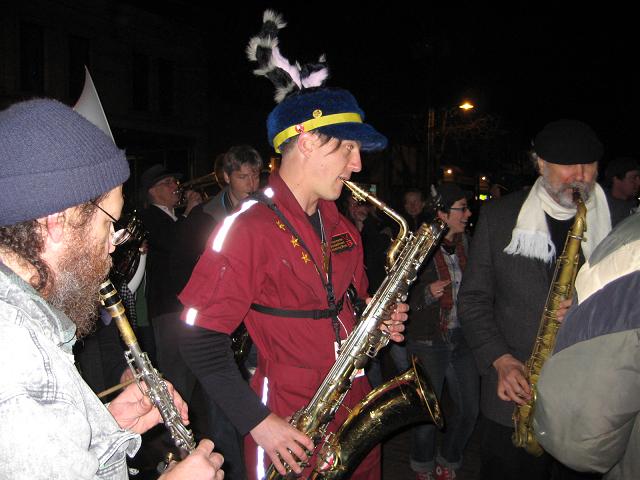 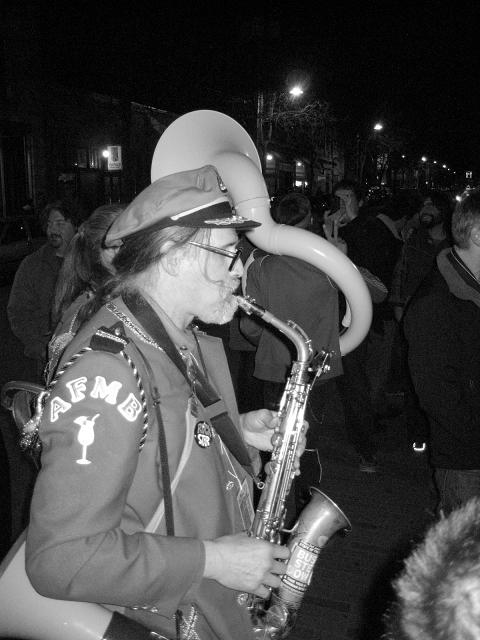 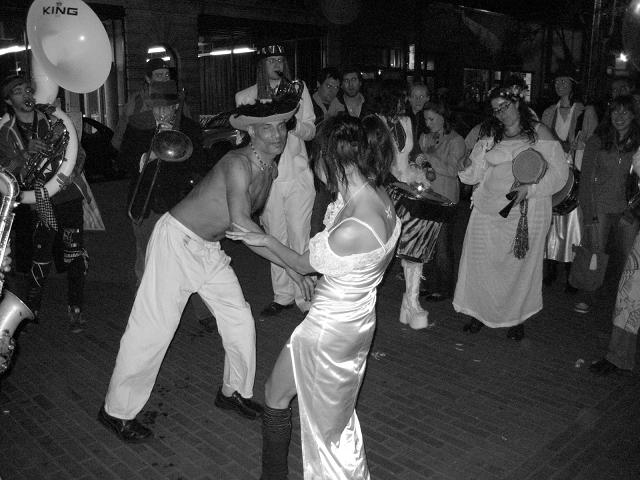 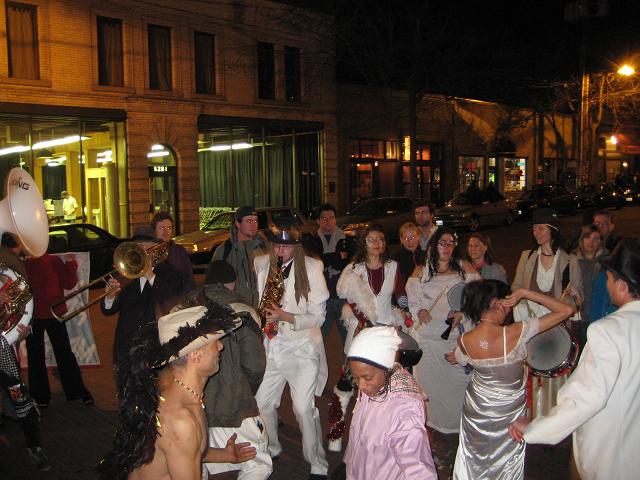 Samba Ja was packed onto the small stage at Connor Byrne where they layed down more thriving Afro-beats. They had amazing unison, but the beats were pretty pounding for that small club and I started to get a headache after about twenty minutes. 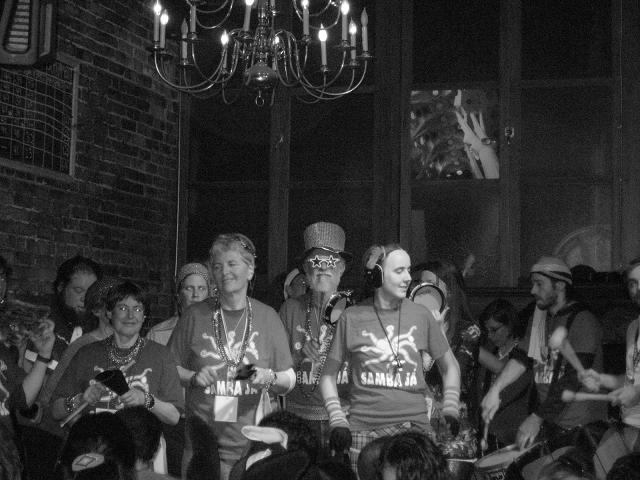 Out on the street, we met a few members of the Second Line Social Aid & Pleasure Society Brass Band who had come all the way from Boston to perform. Wish I would have seen them, but maybe I will on Sunday.

We’re really not quite sure what the hell this guy was all about: 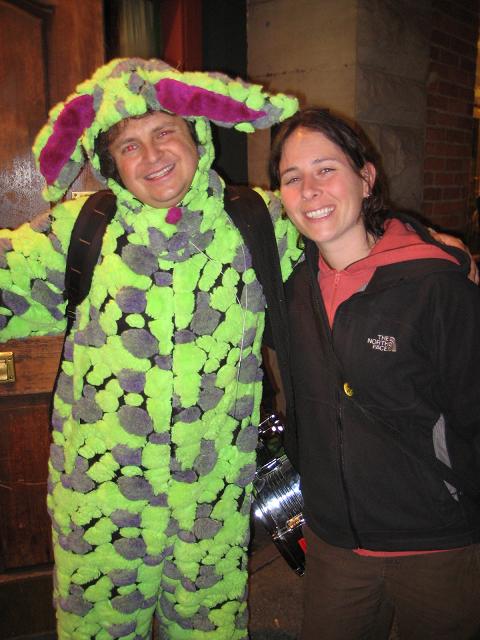 Finished the night off back at the Chai House where the Titanium Sporkestra closed it down. This band included festival organize David Stern who did an AMAZING job by collaborating all of these unique, talented individuals for a fun night of partying. This is the second year of Honk!Fest out here and I’m sure they’ll have to move it to some larger spaces next year as it will easily grow in popularity. 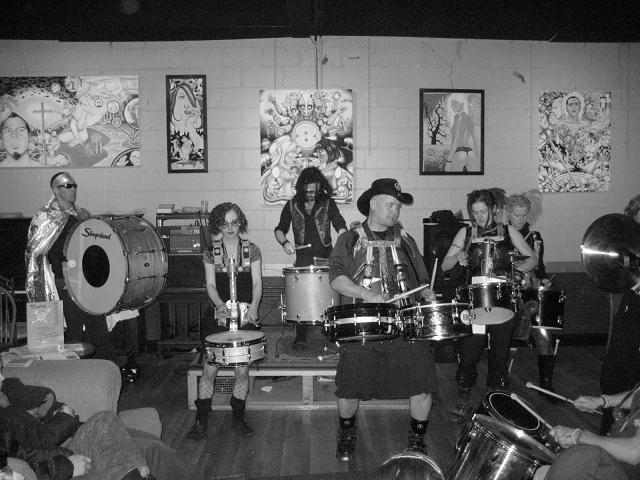 Went out to Gas Works Park today to catch part 1 of the 2-part events for the day. Got there at 1pm as instructed….and nothing was happening. It seems that after the Georgetown shows last night, an after-party occurred and went on until 5:30 this morning.

So on a cold and rainy afternoon under protected shelter, there were a lot of slow moving bodies drinking coffee, eating lunch and talking within. Someone started a campfire and that must have been what was needed as the Second Line Social Aid & Pleasure Society Brass Band climbed up onto a balcony and started performing for everyone. 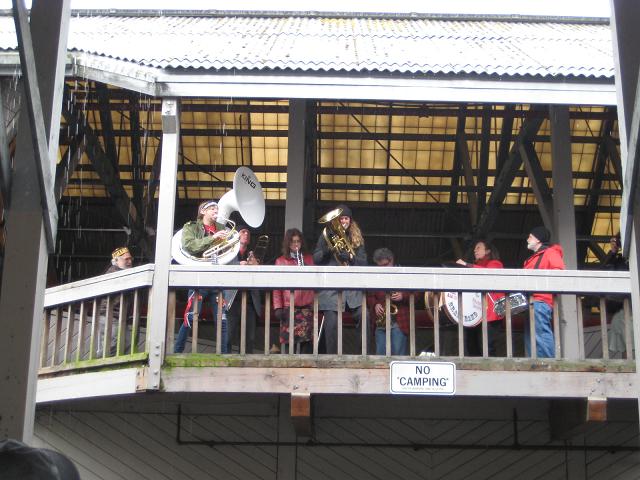 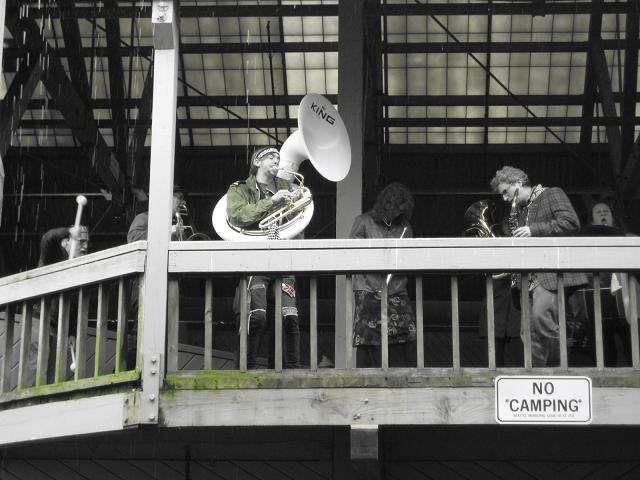 Finally people started to wake up and there was a lot of dancing again like on Friday night. Up on another balcony there were members of several bands combined just playing some fun improv jazz numbers. Out in the grass, even some midieval guys showed up to battle for us in the soaking rain. 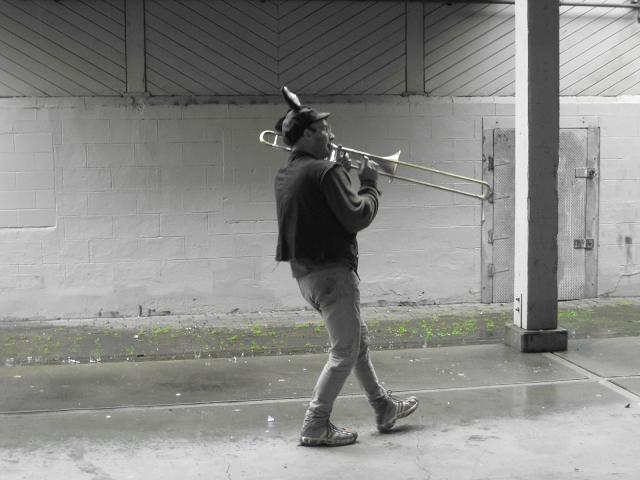 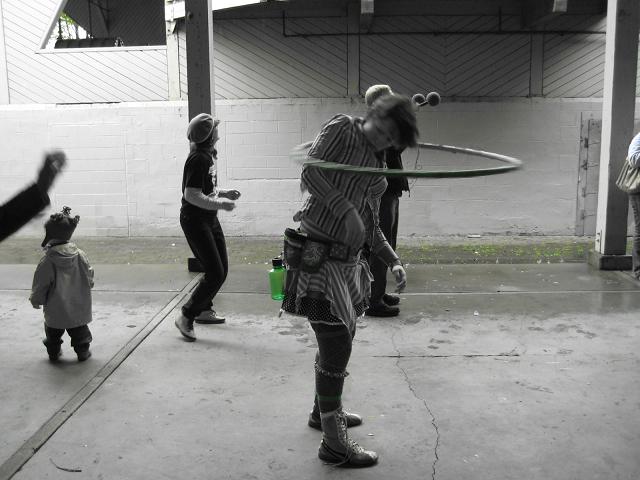 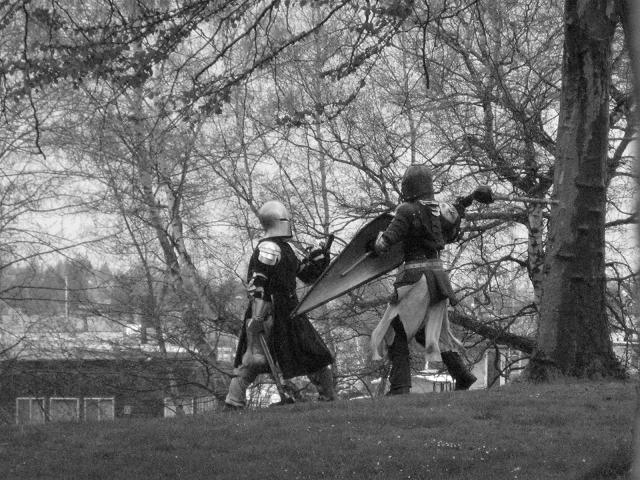 And then my effing camera battery died. I went to another show last night and forgot to re-charge the battery. Great journalism, huh??

The bad part is because so much happened after this point. A guy and gal both showed up on stilts to dance around and party, and the area literally turned into a controlled circus.

I can’t stress enough what a wonderful job the folks at Honk!Fest West did by throwing this together. To the readers at home, you might be thinking “what was the point?” But you really had to be here to experience it. Hearing complete strangers get together, pick up on the beats and rhythms, and start playing “Down By the River Side” together, take turns doing solos, then morph that into a gigantic 200 person sing-along of “This Land is Your Land” just put the warmest feeling in my heart that you can’t even imagine.

Without being too judgmental, it’s likely that most of the performers this weekend don’t pay a lot of attention to the latest stock results, and many might not even have insurance. But in these days of terrible recession and stress, less and less people are like that. For three days during this festival, these musicians pushed all of their problems to the side and just did what they truly love the most: played music.

The best way I can describe it was a musical, New Orleans, Mardi Gras feeling combined with the unity, creativity and freedom of Burning Man. These fantastic musicians showed us how they enjoy life during bad times, and the crowd caught on and learned from them, sharing the fun.

Maybe we should all focus a little more on what makes us smile, right?