Ida Maria: Fortress Round My Heart

Ida Maria is a songstress from Norway who is making the world take notice after moving to Sweden and meeting her band mates. They are a rock band with pure pop sensibilities and know how to connect with their audience. They are catchy and fun, yet mellow and reserved. It’s a difficult line to walk and yet they pull it off with such astounding beauty and simplicity that they deserve extra recognition for it.Fortress Round My Heart is their debut album on Mercury Records and it has already catapulted them into the Top 40 charts in the UK (who knew those were still around?) Such an accomplishment speaks volumes about a thoroughly enjoyable disc. It covers many bases already explored in years past by the pop-rock industry, but they honestly have their own takes. Every song on the disc combines passion with the appropriate sound and that is their true accomplishment. 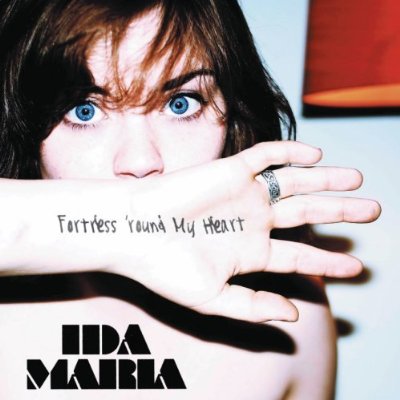 Their signature single is “I Like You So Much Better When You’re Naked” and although this track implies an overall juvenile and hormonal outlook, the lyrics suggest a songwriter confused with emotions and preferences. She follows up the title line with the notable “I like me so much better when you’re naked,” thereby suggesting that it’s not just the sex that’s important. She sings it with a playful understanding implying that she is slightly embarrassed to even say it, but yet she knows that she shouldn’t resist her true feelings.Perhaps the best track on the disc is “Stella,” a song about a man (or god?) offering everything to a 43-year-old hooker – even the world – for just one more night of magic. The song starts strong but ends sounding desperate and lonely; precisely the way a strung-out drug addict or a completely heartbroken lover would sound begging for more. This song translates even better live, as Ida Maria can use the flexibility of the stage to stretch out the desperation longer making it even more chillingly effective.

Other standout tracks include “Keep Me Warm,” a song that she says is about spending the night on the cold hard kitchen floor because there’s nowhere else to go. “Morning Light” is pure catchy pop goodness that sounds like something Razorlight would produce. “Oh My God” is another single that would find a nice place on your local radio station if the year was 1996.

To see them live is an amazing spectacle as well. Not only are they tight and energetic, but she’s a true rock star. Truly a rock star in the most classic sense of the term. She’s just got “it” about her and everyone’s eyes in the club are just glued to her. Maria is this generation’s Kim Deal, but only in the most positive way. Clearly the band is about more than just Ida Maria herself, yet during their show she completely takes over the stage. The other band members are excellent musicians who understand their role in the performance. The bands’ set is the perfect embodiment of today’s touring up-and-coming band. It’s shortÂ & sweet and to the point, while leaving the listeners wanting more. So much more.

Overall this is one of the best upcoming bands of the past year and their disc showcases their potential the way a debut album should do so. Ida Maria could one day hold the music world in the palm of her hand, and something suggests that she would know precisely what to do with it.