This year at The 2010 Sasquatch! Music Festival, we got to hang out with Doris Cellar, Chuck Criss, and Jacob Hyman of Freelance Whales backstage for a quick word to discuss the festival, tour and the latest album.

Randomville: So you guys are from New York…Is this your first time in the Northwest?

Doris: Not at all.

RV: How long have you been out on this tour?

Jacob: This tour has been about three weeks long with The Shout Out Louds, maybe a little longer than that, but it’s like our third big nation tour, so we’ve been to the NW a couple of times now.

RV: What are some of the best parts of the tour so far?

Doris: My favorite part of the tour is actually a paradox for me. ‘Cause I am known for getting hurt a lot and I just like to prove to myself that it’s going to happen every tour – some sort of casualty or rash, or – I don’t know – something’s going to happen that’s not going to let me down at all, so I look forward to that (group laughter). 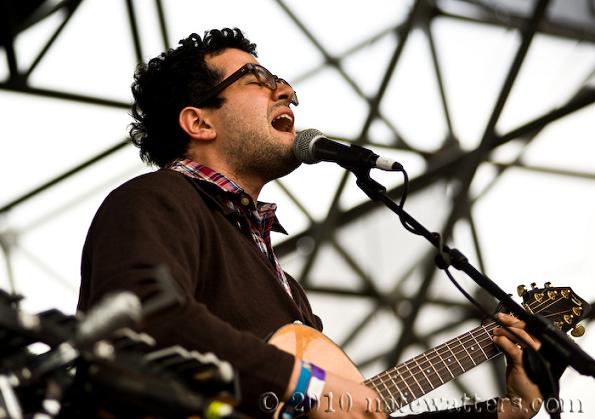 RV: How did you guys all meet?

Chuck: We all kind of had ads up on the internet – the Craigslist story, I guess. We all had kind of side projects as well. And then we all kind of gathered around Judah’s songwriting; that’s how the band got together.

RV: What did you guys think of Sasquatch!? This was your first U.S. festival, right?

Jacob: We played a little festival in Florida in March, called Harvest of Hope, but this has definitely been our first mid to large-size festival.

Chuck: Also, we’ve been camping all three days, so we’ve been having a good time.

Jacob: Well, we’re in the artist section, so we don’t get to see the 5a.m. parties – there’s lots of families and stuff around us which is wonderful – It’s not too loud, it’s easy to fall asleep.

Doris: Sasquatch! is great! We’re really lucky to be on this bill; there’s some great bands. I’m looking forward to some of the bands tonight. Every night is like a new light for me just watching bands and learning things and meeting new people. You know? Camping out under the stars is something I never get to do – I’m from New York City where you can’t look up and see the stars, it’s too bright in the city. I think it’s a great experience. Anyone who’s never been to Sasquatch! should definitely think of investing and saving and coming here, because the Gorge is beautiful and the people are just all about celebrating the day and it’s just like somewhere new to party!

Chuck: I caught it from backstage and it’s funny to see all the indie rockers backstage; Dudes like – I won’t name any names – but dudes who you wouldn’t expect to be there watching (group laughter).

Chuck: Yeah me and my girlfriend got our picture taken with him, we’re pretty excited!

Doris: Ohhh, I gotta see that!

Jacob: I ate dinner next to Chuck D. last night and it was really weird.

RV: What are some of your favorite bands you’ve seen all weekend?

Chuck: It’s been pretty solid all around. I was really excited to see Pavement. I grew up listening to Pavement, so I was happy to see them. I did a quick run over to catch some of Dirty Projectors’ set…

Chuck: LCD (Soundsystem) was great. That was probably the biggest crowd I saw the entire festival.

Doris: Yeah, all of the above. 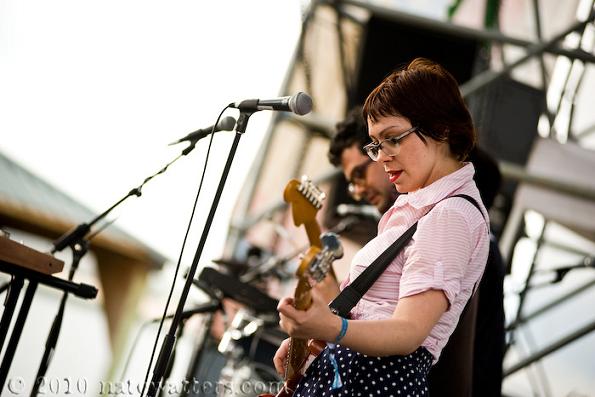 RV: What’s next for you guys?

Chuck: We’re just kind of headlining our way back for the next two weeks or so. Then get back and just kind of recharge to get back on the road. We’re going to be touring with Tokyo Police Club in July/early August. And Lollapalooza is sort of sandwiched in the middle there.

RV: And you guys just put out an album, right?

Doris: We self-released it (Weathervanes) in September and it came back out in April under Mom and Pop and Frenchkiss Records, so it’s not really new to us, but it’s new to us because they couldn’t get it before.