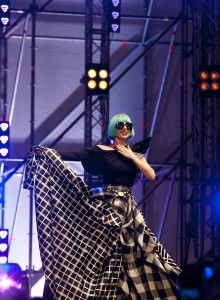 Lady Gaga has announced some information about upcoming ticket presales and fan club access for her upcoming North American Tour. Gaga is asking fans to pre-registers to her “Little Monsters” fan club, then to select a date for which the member would like to attend the show, the fan club registration will then allow each new member to be sent a unique code in order to buy tickets for that particular show.  While it sounds confusing it is most likely an attempt by Lady Gaga and her management to limit the amount of tickets that reach the secondary ticketing industry.  While Gaga has announced this pre-registration opportunity, it is still not known when fans can actually buy tickets with the presale codes…..

After blowing up in 2009 with her single “Just Dance”, Lady Gaga has become one of the world’s most famous and least understood pop icons. Born Stefani Joanne Angelina Germanotta on March 28, 1986, Lady Gaga is both loved and hated by the masses. Gaga began performing on the neo-burlesque underground of her birthplace, New York City, before being discovered and signed to Streamline Records. Her musical influences include David Bowie, Madonna, and Queen, giving her own music a unique mixture of glam rock, pop, disco, heavy metal, and rock and roll. So far she has released three albums, named The Fame, The Fame Monster, and Born this Way. Lady Gaga is currently working on an album to be released in 2013, called Artpop.

In addition to her unparalleled music, performances, and clothing style, Lady Gaga is also an involved philanthropist and political activist. She contributes to the fight against HIV and AIDS, has assisted various relief efforts following natural disasters, and has recently launched a non-profit organization to encourage youth empowerment, well-being, and career development, called the Born This Way Foundation. She is also known for being extremely outspoken for LGBT rights.

UPDATE:  The following locations will have presales beginning on September 18th with public onsales the following Friday.

Expect more dates to be added soon.  Dates listed are the public onsale date and NOT the presale dates, most if not all shows have numerous presales listed already.