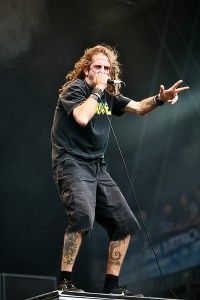 Much publicized legal issues for Lamb of God frontman Randy Blythe forced the band to cancel several European and North American tour dates over the Summer.  The band has now rescheduled and added several tour dates for this fall.

In January of 2012 Lamb of God released its 7th studio album titled, Resolution.  The band had been touring in support of this release before running into legal issues abroad where their singer was arrested in Prague.  The arrest stemmed from an incident at a live show in 2010 where a fan jumped from the stage several times during the show, then died later from injuries sustained from those actions.  The issues are still not resolved and have even led to the band making a statement on their website stating that they could not visit Canada due to pending issues.  No further statements have been made by the band regarding the legal issues or when they might return to Canada.