Live Review: Jackrabbit and Kristen Ward at The Tractor Tavern 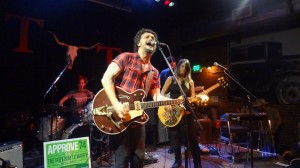 It was a Thursday night, but The Tractor Tavern was completely packed.  “Thursday is the new Friday!” according to Tony Fulgham of Jackrabbit.  At first glance, The Tractor looked like it was hosting musical family reunion.  Many former band mates and other local musicians showed up to support Jackrabbit, Kristen Ward, and The Brambles. Friends and family, in-laws, outlaws and a few drunk “uncles” showed up, too.  Lots of love, hugs and laughter spread throughout the crowded tavern.

Jackrabbit opened the night after being introduced by some clown as The Jaybirds.  They celebrated the release of their first full album, A Better Place.  Jackrabbit includes Tony Fulgham on vocals/guitar, Aimee Zoe Tubbs on drums and Moe Provencher on bass. They also invited Ole Tinder’s J. Kardong on pedal steel and Jason Staczek (from Lindsay Fuller and Madrona) on keys.  Zoran from The Legendary Oaks filled in on guitar on a few songs near the end of the set.  With a stage full of talented musicians, they were ready to go.  Jackrabbit powered through “Big Kids”, the in-your-face first song of the album, while pairs of dancers took to the floor, including Tony’s mom. 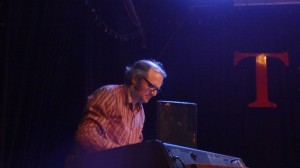 Jackrabbit’s new album continues with the fighting themes found throughout their first EP. See a previous review here.  J. Kardong’s Pedal steel rang clearly throughout several songs, including “I’m Sorry”, the fight-and-forgive song of the set.  The mournful whine of steel showed up again on the chorus for the grave “Arizona Death Song”.

The band paused while Tony took a moment to ask people to vote and approve Referendum 74 so his band mates Aimee Zoe and Moe can choose to get married. The audience cheered while the girls shrugged indifferently at Tony’s statement, pretending like they didn’t care one way or another. Aimee Zoe then said they have plenty of stamps available if anyone needs one to mail in their ballot. Tony stepped in and declared, “This message has been approved by Barack Obama and my Mom!”

Tony and the band put so much heart and sincerity into each performance. I think that’s why I come back to see their shows over and over again. Their songs feed my soul. “What Do I Know”, a self-deprecating love song, has such a heartfelt chorus, with soft harmonies from Aimee Zoe and Moe. Jason Staczek’s turn on the keys during the bridge added depth and gave the song a retro, soulful groove. Tony exclaimed before diving in: “I’m a lucky dude!” 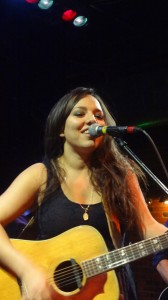 Jackrabbit had time to play a couple more songs before Kristen Ward took the stage. They performed “Throwing in the Towel”, the first song from their EP and a favorite of mine. Jackrabbit closed show with the bluesy “Around the Bend” a song that channels Tom Petty’s mojo. I love to see them stomp out that tune; I noticed my boot heels were stomping right along with theirs.

Kristen Ward, also out to celebrate her new album, Last Night on Division, put on a rocking show flanked by two extraordinary guitarists.  One was Justin Davis, most recently from Star Anna and The Laughing Dogs.  The other was veteran Gary Westlake of Flight to Mars fame, among other legendary bands. Gary armed himself with several guitars and a mandolin, racked and ready.  Keith Ash, also a Laughing Dog, was strong on bass. Drummer Simona Bressi pounded out a rock beat while looking gorgeous, as Kristen pointed out to the audience.

Kristen started her set with “Last Night on Division” the strong title track off her new album. The full band sounded fantastic, and the audience pushed forward for a closer look. Kristen has a rich alto voice made for country, but can wail on the rock songs, too.

She slowed it down just a bit and played some sweet love songs from the album, including “A Man Like You” which had a flowing solo from Gary and “Saved By Love”, an uplifting song, with clear harmonies from the band. “My Love” reached into the higher register of Kristen’s voice in the chorus and echoed beautifully throughout The Tractor.

The band picked up speed again with “Rodeo”, which starts out with a riff right out of “Last Dance with Mary Jane”. Kristen encouraged the audience, especially those in front to dance or “just move!” This was my favorite song of hers; it is the definition of country rock with a yodel in the lyrics and a nasty, grinding rock solo by Gary toward the end. She also played “I Wanna Be”, her single worthy of the Americana charts and available as a free download on her website. 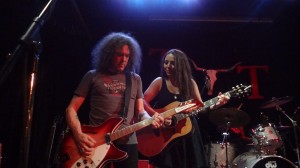 Near the end of the set, Kristen laughed as she told the audience they probably expected a quiet acoustic set from her, not a rock show. I saw her perform once before when she opened for Todd Snider in 2009. It was an acoustic show; and although she played a memorable opener for Mr. Snider, tonight’s show was a pleasant surprise. She finished off the set with what she called a blast from the past–a song called “Baby” from the 2008 album Drive Away. The crowd responded with hearty cheers after her triumphant performance.

Unfortunately, we could not stay for The Brambles, since it was already past our bedtime.  We reluctantly left after asking Jackrabbit members to sign our copy of their cool vinyl album (with free download inside!).  Check out all of the band websites for merchandise, downloads and tour dates.