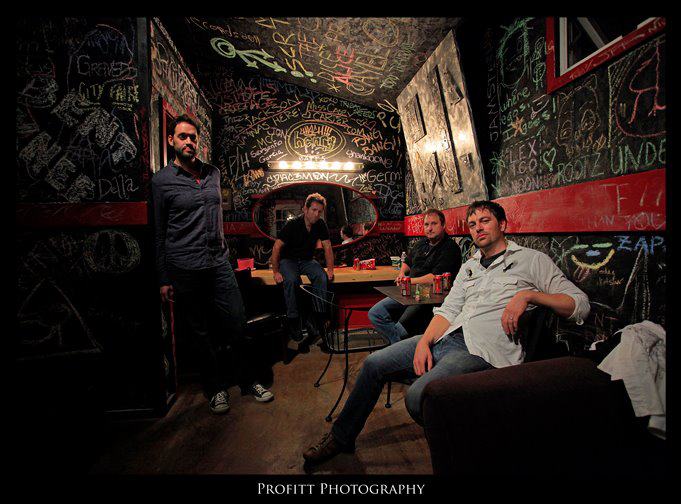 I was looking forward to seeing Massy Ferguson again after witnessing their opening for Brent Amaker and the Rodeo back in July at the Tractor Tavern.   I purchased their latest album, Hard Water at that show, and it hasn’t left my CD player.  This time around, they were celebrating the release of their EP,  Damaged Goods at The Nectar Lounge on October 15.

Opening for Massy Ferguson was Tony Fulgham and his new band, Jackrabbit.  Jackrabbit is the outcome of a hard-won search for new bandmates after the death of North Twin.  I was still in stage #6 of the grieving process over that one.  North Twin met its demise in 2010 after their drummer Rick Cranford moved back east.  I was looking forward to getting some closure, letting go and accepting this reincarnated band.   Fulgham found an energetic drummer, Aimee Zoe Tubbs from The Starlings and writer/producer/bass player Moe Provencher.  For this show he also included Portland’s Jason Montgomery on guitar/pedal steel, which added country flavor and depth to the live show. 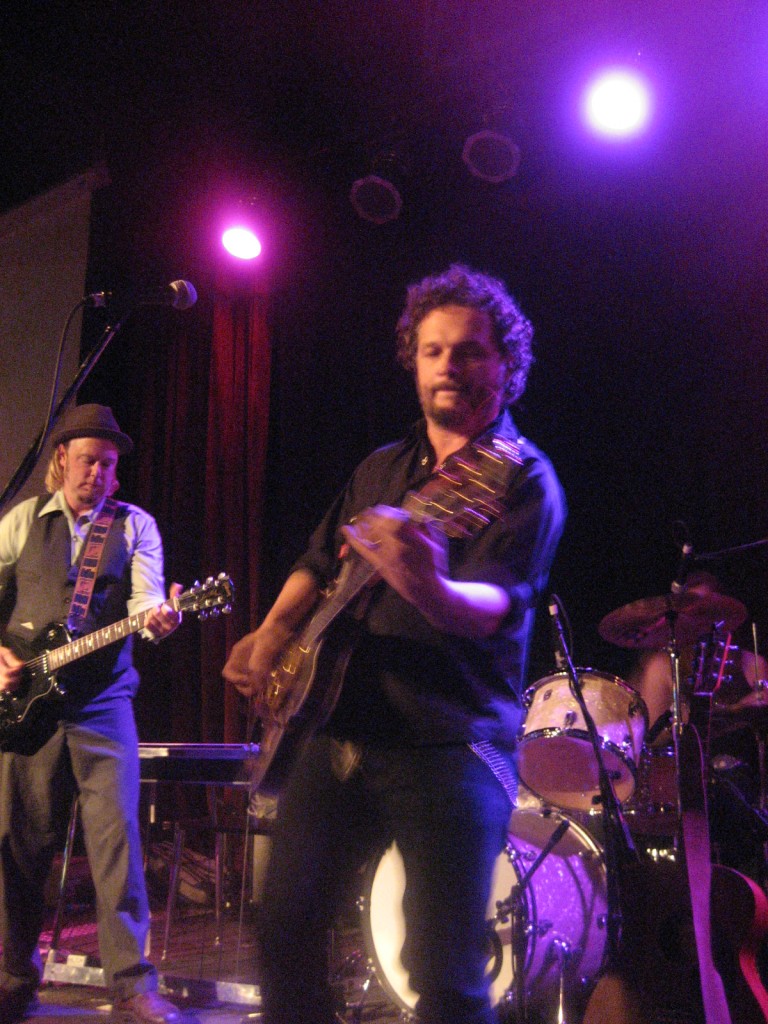 Fulgham started the ten song set with “What’s a Guy Gotta Do,”  a big track off their new eponymous EP.  The ghost of North Twin haunted this song throughout the harmonies, blasting vocals in the bridge, and prominent, fuzzy guitar.  I always liked Tony’s voice.  It has a nice country twang, imported from his Houston days; but it can get edgy and rock the faster songs, too.

I also enjoyed “Throwing in the Towel,” which follows the fighting motifs found throughout the EP.   The lyrics, according to Fulgham, are about his step dad.  There is some bitterness mixed in with an upbeat country melody, heavy on pedal steel.  The late North Twin definitely brought more rock in the mix, but Jackrabbit had its moments.  Change can be good. 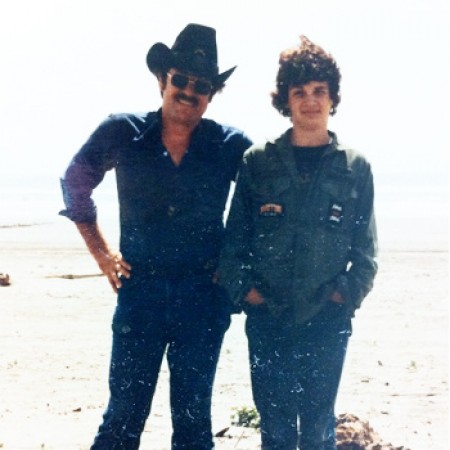 They got a bit more serious with “Falling is Mine.”  The harmonies added just enough ache.  The poignant lyrics of the chorus made me feel that this band is here now, and plan to stick around for awhile:

They played a few other songs not on the EP, including “I’m Sorry” and “Big Kids.”  The band opened up and tore into “Big Kids,” and the crowd pushed forward and started dancing.  Another song, “Around the Bend” had hints of Tom Petty and the crowd responded with more cheers, claps and dancing, followed by an encore with “Stronger Than You.”

Tony exclaimed, “If you ever hear me complain about my life, just sock me in the arm!”  He then quoted his wife, who reminds him often:  “It’s a motherfucking GIFT!”  I think I made a breakthrough to Stage #7:  Acceptance and Hope.

Jackrabbit’s next gigs will be Wednesday, October 26 at Doug Fir Lounge in Portland and Thursday, Oct. 27 opening for The Gourds at the Tractor Tavern in Seattle.  I’ll be there.

The crowd was now thoroughly warmed up for Massy Ferguson.  We stepped outside in the crisp air to cool off while waiting for the band to set up.

Massy Ferguson have been stomping around these parts since 2006.   Fronted by bassist Ethan Anderson (remember our interview with him??), the band has  played all over the globe in the last few years, and experienced “weird, local/international touring, where we somehow ended up playing Yakima and Reykjavik, Iceland in the same three week span last October,” said Anderson.  They won a contest last year for favorite band through Seattle’s REVERB Fest, and got to play the Iceland Airwaves Festival.  They also toured in Australia, and had a gig at The Brick Tavern in Roslyn, WA right before playing Amsterdam.

The band also played Bumbershoot, Seattle’s Music and Arts Festival, where they opened for Jessica Lea Mayfield and legend Leon Russell.  Anderson is also quite a character; he was named one of the “25 Hottest People at Bumbershoot”–in a panda costume!  He sat in on Head Like a Kite’s set while wearing the costume. 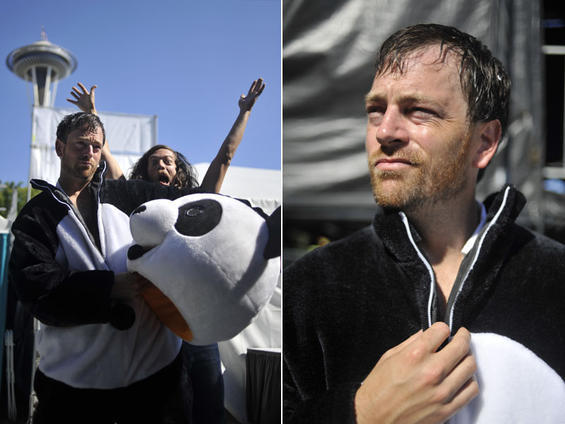 Massy Ferguson broke out on stage at The Nectar with smiles and energy.  Anderson and the rest of the band, including Adam Monda (guitar/vocals), a clean-shaven Tony Mann (keys), Dave Goedde (drums), and Jason Kardong (pedal steel) know how to work the crowd and get things moving.  He immediately requested the outdoor crowd to move in, and asked everyone to then move forward and fill up the gap in front of the stage.  The audience willingly obliged, and the fun began.  They plowed through three songs off their latest album Hard Water.  First came “Long Time No See,”  followed by “Sparks and Shrapnel” and the slower, thoughtful “What You Decide.”  They recently had some exposure via the Eddie Bauer Emerging Artist Program:

He announced that his EP is up for sale (five bucks, cheap!) and his beautiful, very pregnant wife Cynthia was walking around the crowd selling them.  Anderson proudly and tactfully exclaimed, “I knocked her up!” before continuing on to the next song.

Anderson energized the audience as they yelled, “Powder Blue!” which seems to be their anthemic audience participation song.  He then introduced the downtempo “Damaged Goods,” a hard-luck story and title track of their EP, which received positive responses from the crowd.

My favorite song was next: “Pretty Plain Jane” from Hard Water.  It has a pensive harmonica intro, played by Adam Monda.  Maybe the lyrics below applied to the early days, playing in little clubs and even a farmers’ market in Mukilteo; but now they pack in the crowds:

And amongst yourselves you should be free
Ain’t getting paid unless you got the pedigree
So, I’m in a bind, I said I’m in a bind

For the next song, “Wagon Wheel,” he called onto the stage the “Guest Female Vocalists,” and pointed them out randomly in the crowd and invited them to sing and play tambourine.  I asked him about this later, as one woman in particular could really wail.  He said, “I like to have a little spontaneity at the shows.  If we can get additional people on stage, that’s awesome.  If they actually have some skills, that’s a bonus.” 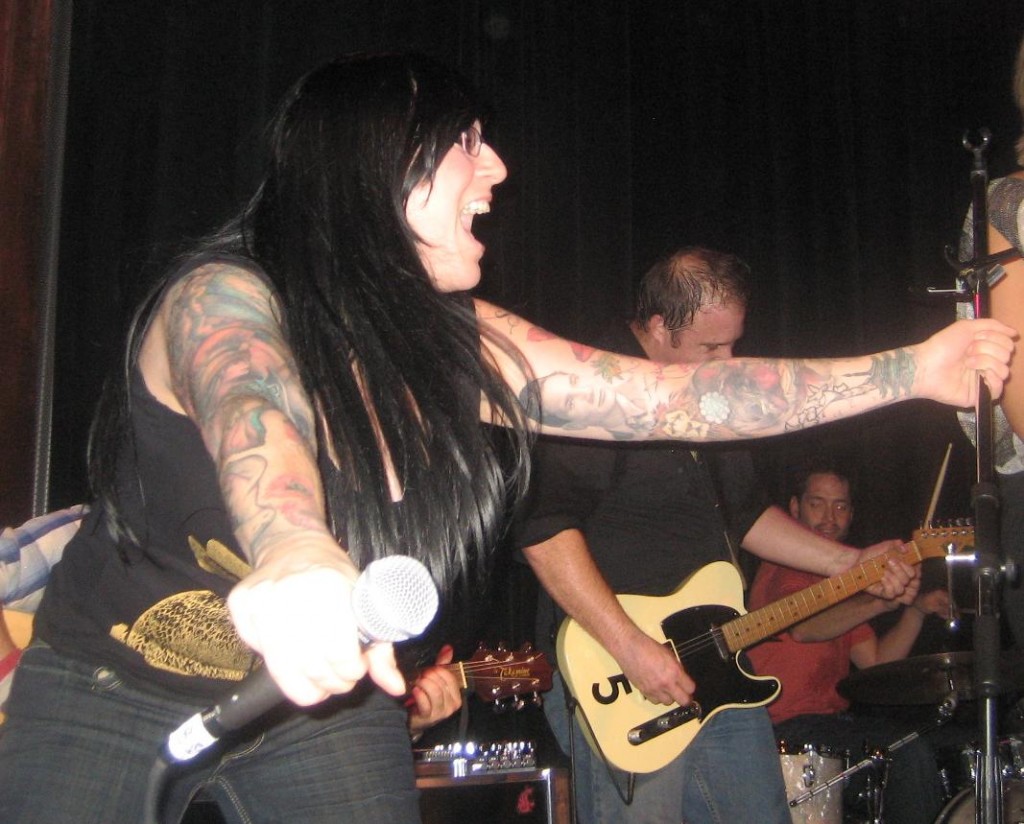 When Anderson was a young man growing up in Marysville, Washington, he “…somehow stumbled upon a string of real bad jobs, then moved to Bellingham for a year when I was 22, and the jobs were even worse.”  Included in his resume are raspberry picker (fired for eating too much of the product), board stacker, cat litter bagger, and rock breaker.  He references one of his jobs of painting imitation crab meat(!) in the song, “Bum Drunk,” which includes  a lighthearted play on the keys by Tony Mann and great rockabilly drums from Goedde. 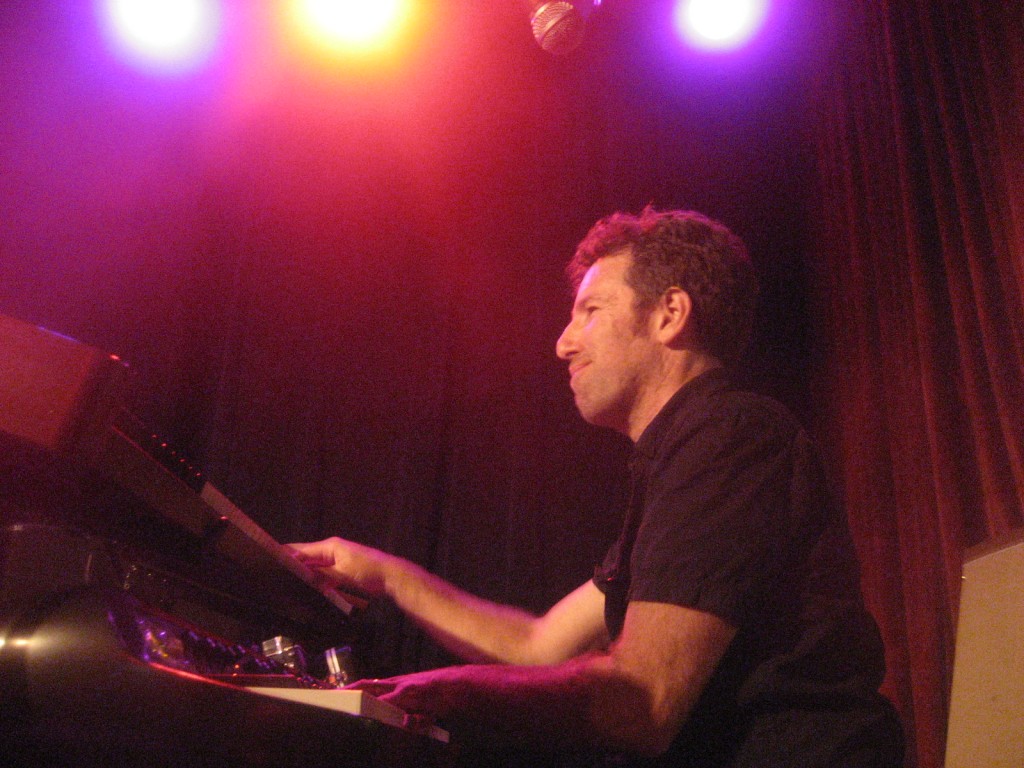 Unfortunately, we had to leave early and didn’t get to hear the rest of the set, which, as we were walking down the sidewalk, included a cover of Men At Work’s “Down Under,” with flute accompaniment by Anderson.  I did get to witness his mad flute skills at The Tractor, and I was sorry we didn’t just march right back in to the show. 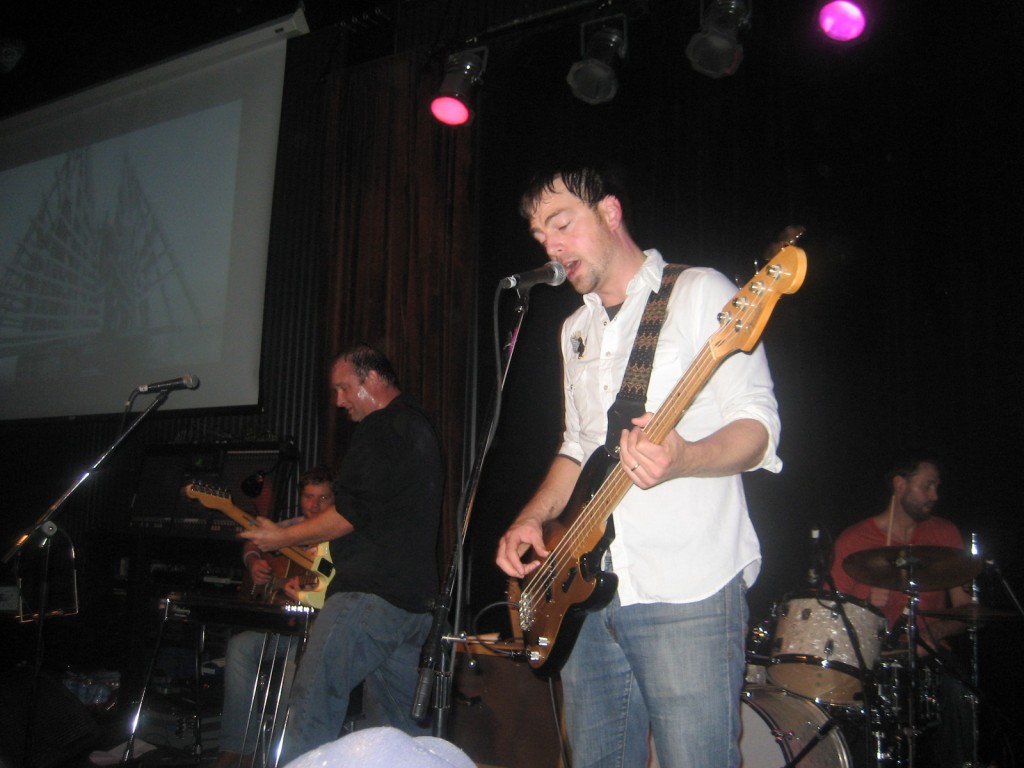 Massy Ferguson plays Columbia Valley Brewing in Wenatchee, WA on November 5th, where I’m sure they’ll be playing “Wenatchee Eyes,” an ode to a girl a bit rough around the edges, off Hard Water.  They’ll ring in the New Year at The Hard Rock Cafe in Seattle.  Not a bad way to spend New Year’s Eve.