The Paperboys, a culturally diverse, award-winning band from Vancouver, have been lifting people’s spirits with their high energy shows for 16 years.  There is no way to place their music to one genre:  it incorporates such a wide variety of cultures, instruments and tempos.  On their website, The Paperboys try to explain who they are: “Call it Guinness with a tequila chaser while listening to an Americana jukebox.”

Tom Landa, the Mexican-Canadian lead singer, played acoustic, electric and Mexican 8-string guitars.  On Tom’s right was his energetic, flute-playing Scotsman. Behind them was the drummer who kept alive the various tempos, ranging from Celtic jigs to reggae beats.   On Tom’s left, his adorable fiddler who held her own with beautiful vocal harmonies, upbeat Celtic fiddle solos, pop melodies or emotional songs of love.  The banjo/bass player was versatile, and stepped in with keys as needed.  A trio of brass rounded out the eight-piece band.  The sax, trumpet and trombone got their turn at solos near the end of the set. 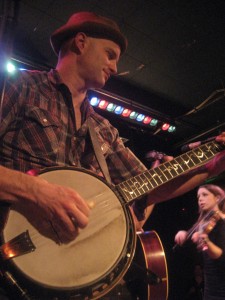 All of the band’s songs, save one, were up-tempo, optimistic and joyful.  “California” is a jubilant pop song, with flute and fiddle solos adding that Celtic vibe.  The audience joined in on the chorus, “Califooorrrnia! Califooorrrnia!  I think I’ll stay here, I think I’ll stay here for a while.”  “Fragile” was the only song that had more of a somber tone, but any seriousness was quickly doused with the next instrumental, “McGoldricks,” which began with the fiddle solo and ended with the whole band joining in.  The whooping audience clapped along and stomped their feet to the music as it became more intense; the volume increased when each instrument joined in.

The encore included original songs melded into a medley of various pop, country and reggae covers, and the audience was encouraged to sing along.  The band so easily slid from one song to the next, keeping the same tempo and key.  To get everyone in the Christmas spirit, they also played “Feliz Navidad,” with the audience’s full participation.  Apparently, they played that song at the tree lighting ceremony in downtown Seattle, too.

The opener, a Seattle transplant named Benjamin Doerr, took the stage a bit late to a large crowd of cheerful, noisy patrons.  His new three-piece band called St. Paul de Vence is named after the small French town his grandfather lived in during World War II. Recently, Doerr assembled a concept EP called When Our Boys Have Been Buried, songs that are musical interpretations of his grandfather’s stories of growing up and joining the military during the war.  The songs are simple and heartfelt, and are a beautiful way of capturing his grandfather’s stories.  Doerr played songs from this EP and others on acoustic guitar, with two bandmates on electric bass, accordion and concertina. 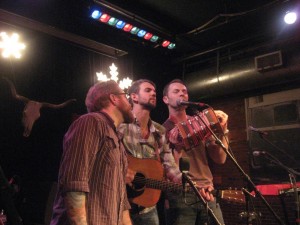 The folk songs had a hint of French flavor, as the accordion played such a crucial role in most of them. “She’ll Go” picked up the pace with fast acoustic strumming and keyboard.   “Hummingbird” included nice harmonies and a pleasantly simplistic chorus.   Doerr introduced the song “War Love” by explaining that his grandfather had two emblems on his military uniform, but only one remained because he “might have given one to a girl.”  Doerr said, “If an 85-year-old man tells you that, you’ve gotta write a song about it!”

Between other songs, he spoke of his talks with his grandfather, and mentioned that when his grandfather’s town was freed from German occupation, “his heart sang out–his heart sang out.”  It was a lovely, poignant set of music; I only wish the noisy audience were a bit more respectful of his work and listened to the heartfelt stories he told.

Third Man Records Band of the Month: The Greenhornes Charity of the Month:January 2011
Copyright 2009 - 2012
Randomville.com ™
All Rights Reserved - Photos Licensed by PR Photos