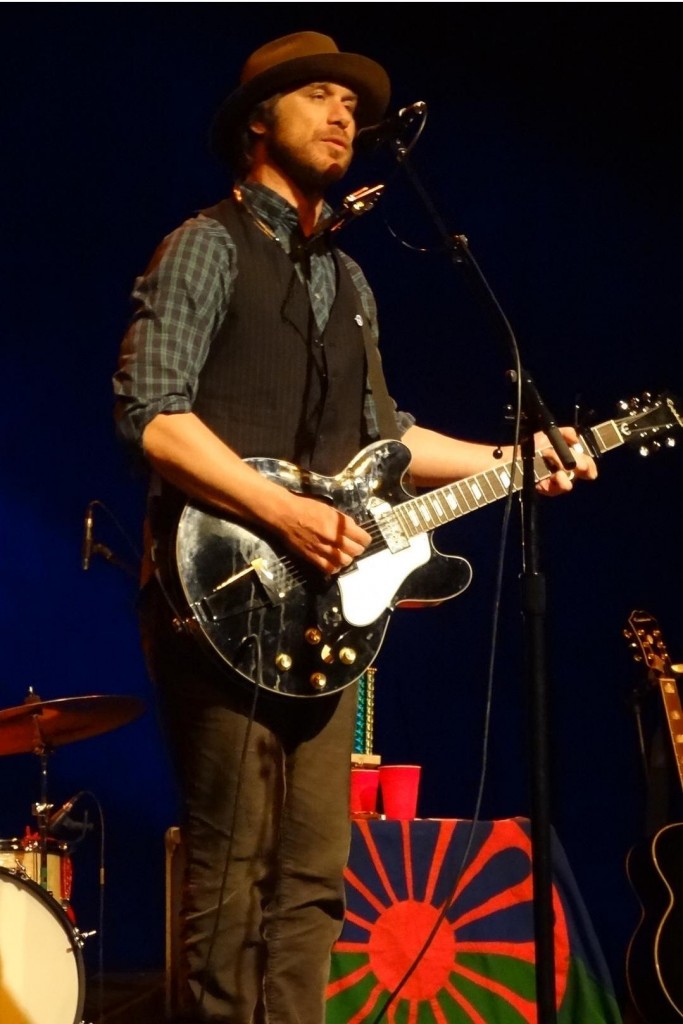 Todd Snider played The Triple Door in Seattle on Friday, April 20, the second of a two-night event.  Although it was 4/20, Todd was under heavy instruction (threats) by the management not to smoke anything green in the green room.  Okay, so what did the managers at The Triple Door expect when they decide to book a show on 4/20? Not that Snider smokes dope; he just needed a word that rhymed with “Pope” in his song, “Alright Guy”.

A Nashville transplant (make that East Nashville) originally from Oregon, Snider is most widely known in Seattle for his deliciously funny take on 90’s grunge with a song called “Talkin’ Seattle Grunge Rock Blues,” although this song was missing from Friday’s set.  He made up for its absence with a fine set of old favorites, other songs that appealed to the local crowd, new ones from Agnostic Hymns and Stoner Fables as well as a few surprises. 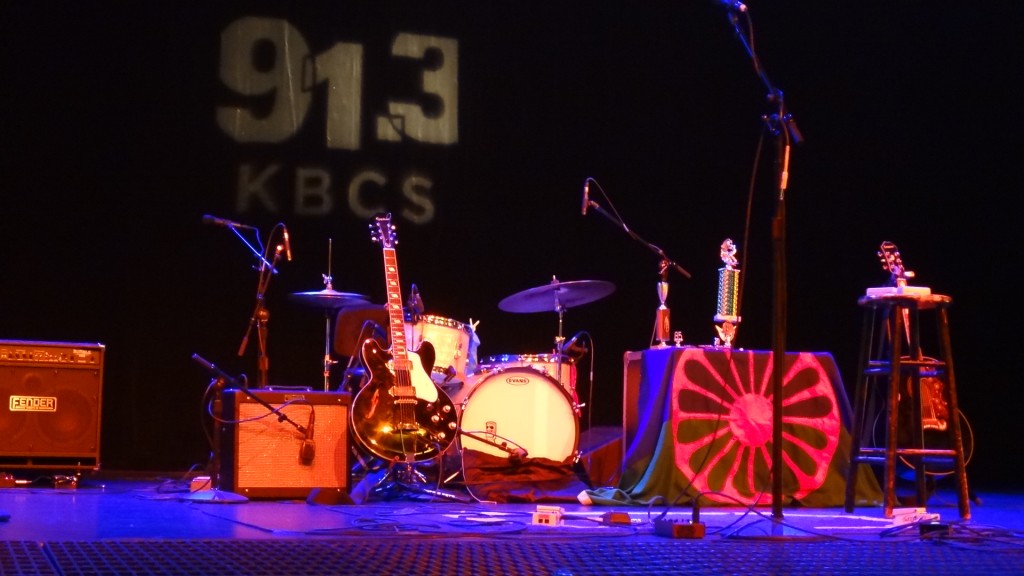 After settling into our dinner theatre booth and dining on tasty appetizers, we were ready for the opening act, Reed Foehl, a folk singer from Colorado.  Foehl and his duct-taped Guild guitar played a peaceful 30+ minute set of  heartfelt songs with a little harmonica thrown in as needed.  His playing was perhaps a little too soothing for the rowdy Todd Snider crowd, but the people were respectful and listened or finished up their meals while he performed.  I purchased Foehl’s second album entitled Stoned Beautiful after the show.  It has a serene quality, something akin to an Adirondack chair on the back porch.  His clear voice with a hint of vibrato lies somewhere between John Denver and Ryan Adams. 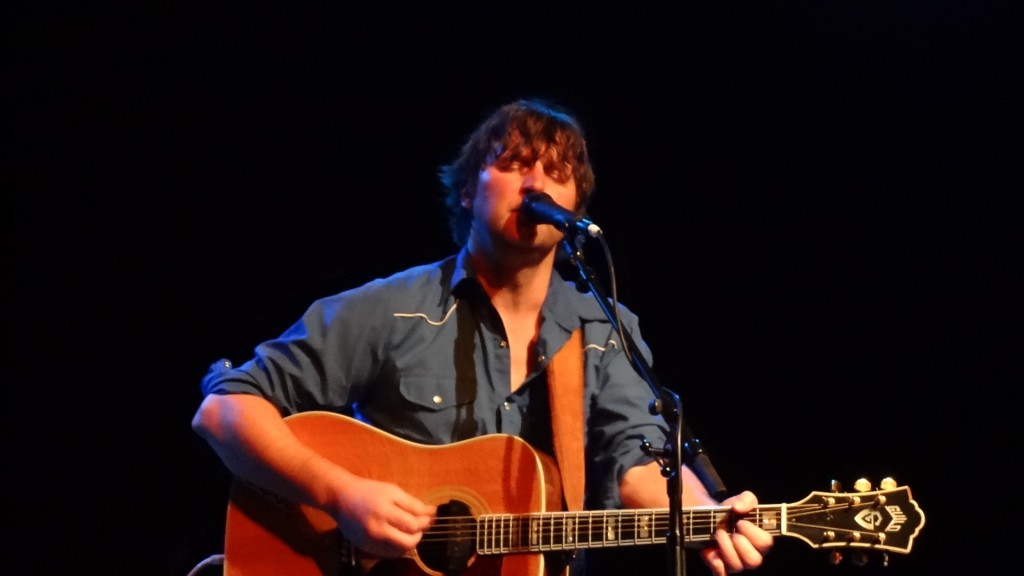 Notable songs Foehl performed at the show included the title track, “Stoned Beautiful” and “Carmalina,” also from his second album.  He also performed a beautiful cover of John Prine’s “Mexican Home” and mentioned that Prine is his hero.  Lee Ann Womack, a mainstream country singer, will cover one of Foehl’s songs called “Fly” in the near future.

After a quick break, loud and masculine whoops and cheers erupted as the house lights dimmed.   The “Sanford & Son” theme song played while Todd entered the stage, joined by Paul Griffith on drums and Eric McConnell on bass.  They took a couple of minutes to settle in and don their instruments.  Todd slipped off his canvas tennies while his roadie Elvis handed him his Epiphone; then “Judas went electric.” 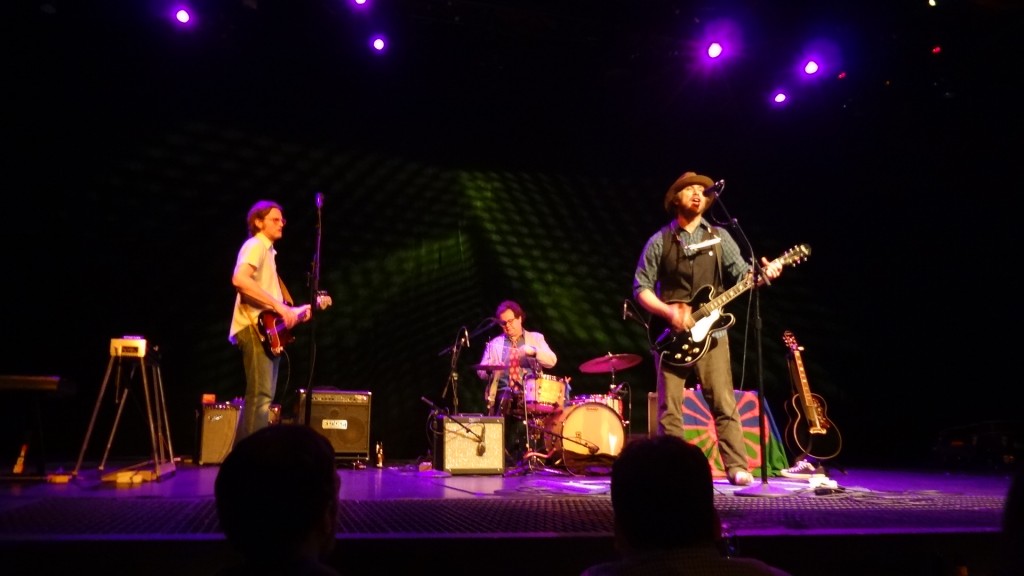 Snider electrified the audience with “In Between Jobs,”  a gritty and bluesy tune off his new album.   His character feels the frustration of being stuck in between jobs and watching the rich get richer.  “What’s keeping me from killing this guy–taking his shit?  Can you dig it?”

Mr. Snider is a man of the people;  he’s a folk musician/genius with a very humorous and witty take on serious social, religious and political topics.  He’s The 21st Century Mark Twain of Folk.  Before judging him and his views on the state of the human race, relax–it’s funny shit.  The stories Snider tells in between songs can be equally entertaining, although he might ramble on “for as long as 18 minutes.”   He also comes armed with a disclaimer regarding “making this shit up” and sharing his opinions via his songs with the audience.

Next, a local favorite, “Ballad of The Kingsmen.”  He added an update regarding Marilyn Manson and changed the line about how Marilyn was a skinny public high school kid who joined a band and got all the girls.  Instead he added, “Well, he could be working at Wendy’s now; but the point is, he had a good run!”

“Too Soon To Tell” was another song off his new album and includes a great line, and possibly my new motto: “Everything in moderation, including moderation I suppose.”  Here is a clip of his song from “American Songwriter“:

Tonight, he told The Aaron Allen Story, which I will not attempt to re-tell here, but the main idea of the story was the advice he received from Mr. Allen, paraphrased as:  “If you want to be a musician for a living, you must ask yourself if you can you pack up your life, everything you own, in 15 minutes.  There might also come a time when you need to do this out of necessity.”

He played a couple of other local songs, including one about his stint in “Tillamook County Jail” where he said he had to also do community service, and the probation officer appointed him to teach kids about drugs.  Big mistake!  “D.B. Cooper” was another favorite played later in the set.

Before breaking in to “The Devil You Know,” a song about crime in the ‘hood, Todd exclaimed, “East Nashville – We’ll steal your heart AND your lawn mower!”

He officially ended his planned set with another new one called “Digger Dave’s Crazy Woman Blues,” a slower, stripped down version, which then picked up in volume when the bass and drums joined in.  He then transitioned into “Alcohol and Pills.”  I watched his big toes curl back a little when he emphasized a high note. 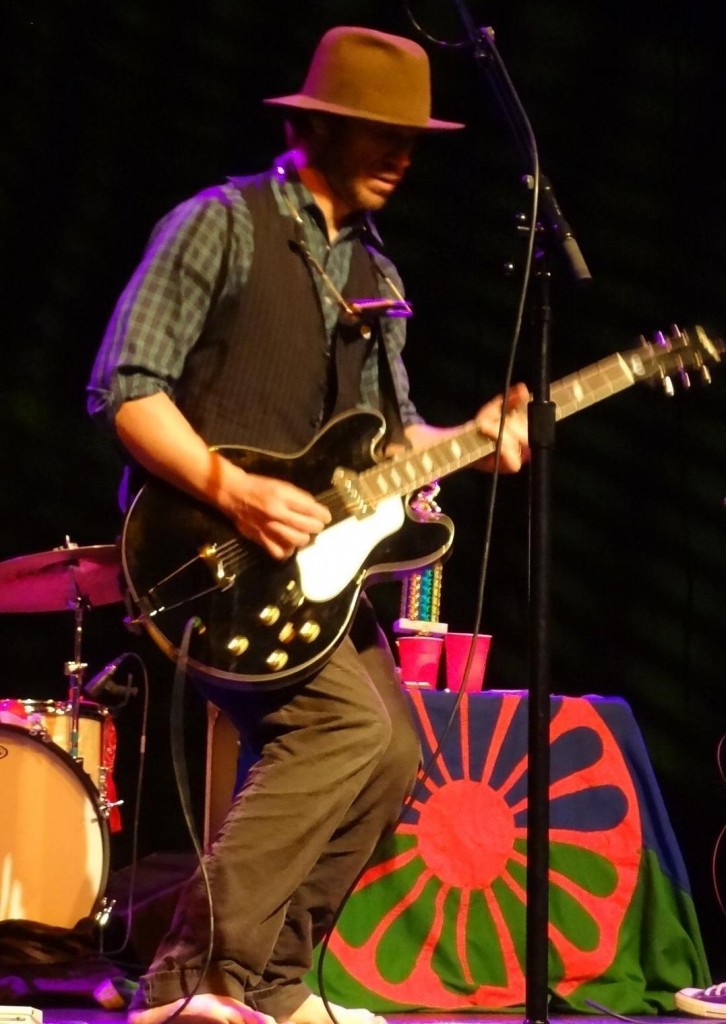 Todd Stompin' It Out

Snider then started taking requests (the audience shouted out requests between songs from about the second song on!) and led off with “I Can’t Complain,” “Play a Train Song” and the sing-along-if-you-aren’t-too-drunk-or-maybe-even-if-you-are “Beer Run.”  After that song, he raised his arms in triumph.

He did play “Alright Guy”  and made reference to the fact that there are a lot worse things a person could do besides what he was going to do in the green room on 4/20.

Snider also released a tribute album to his hero and mentor Jerry Jeff Walker called Time As We Know It: The Songs of Jerry Jeff Walker.  He told a story about being in a Santa Fe club with Jerry Jeff and hearing Mr. Bojangles being picked on a banjo somewhere.  The two took to the street and found a solitary street musician, playing only for them.  They listened, and neither of them told the musician he was playing in front of Jerry Jeff Walker, the man who composed the song!  Todd said, “I must’ve done something right in my past life to be able to witness that with Jerry Jeff.”  He then played a very sincere and tender version of “Mr. Bojangles” and gave proper respect for Mr. Walker.

No election year would be complete without “Conservative Christian Right Wing Republican Straight White American Male” in the set.  He bowed and exited the stage after this song, but the audience brought him back for the encore, “Louie Louie.”  First, Todd told a funny tale about having a girlfriend years ago who wanted him to get a real job and sell his guitar.  Then he thought to himself, “I could be outta here in…” the audience joined him and shouted in unison, “15 minutes!”