Pinups and Pasties: A Cabaret for our Troops

All photos courtesy of Sevenseven photography.

I never really knew anything about burlesque. In my mind, I thought of the “I’m Tired” scene from Blazing Saddles:

Earlier in the day, before my first burlesque show, Pinup Angels’ Pinups and Pasties: A Cabaret for our Troops, even my mother said “Have fun at your stripper show” before I hung up the phone. Then I wondered if I would be witnessing nudity. 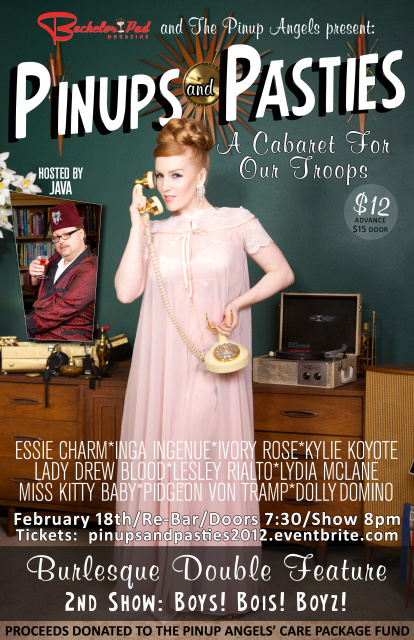 Yes, the Pinups and host Java from Bachelor Pad Magazine took over Re-bar in Seattle for one soggy Seattle February evening to hold a fundraiser to send care packages to the troops that are overseas.

Miss Essie Charm started off the evening with a little charm as she sang a jazz song that brought the room back to the 1930s. She sang in a mildly baritone voice, strutting around with a pretty boa. The crowd whistled to her, but it was pretty tame. No clothes were removed for this song. Essie had the only singing numbers for the night – the rest of the women just danced. 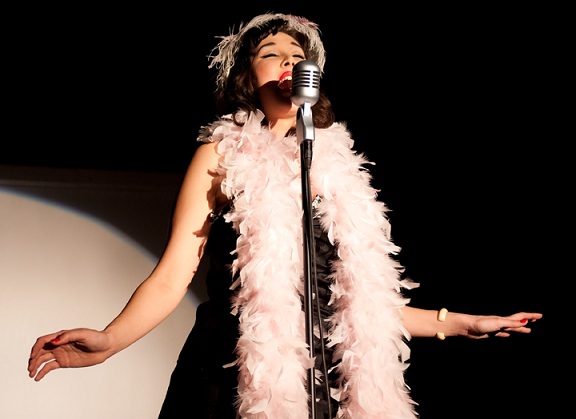 Kylie Koyote was introduced as the “Desert Nymph,” dancing to a Spanish-themed song. Koyote reminded me of Salma Hayek in Dogma, before she had the awful encounter with the Shit Demon. She strutted around with flowers and feathers in her big Chiquita hairdo, getting the crowd all riled up by licking her fingers and gently tugging her silky, elbow-length gloves off with her teeth. Eventually she danced her way down to a bikini bottom and some pasties covering her nipples, which completely set the crowd (the majority of which were women) into raucous applause. 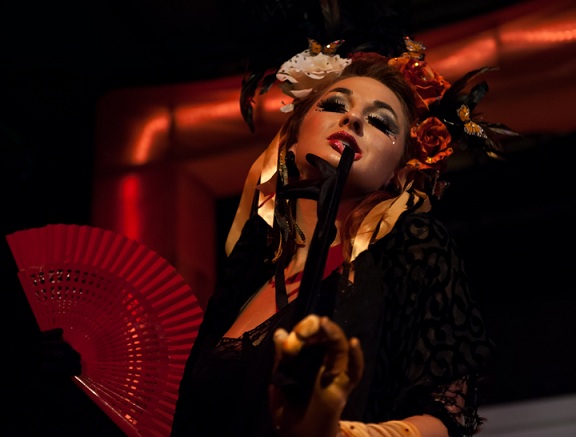 Ivory Rose did a tease to a slower jazz number, hiding topless behind her boa until the very end. Again, not complete nudity, as I later learned that nudity doesn’t happen at these shows. Lady Drew Blood came marching out to some crazy music, dressed like a clown-meets-Raggedy-Ann doll, accompanied by sexy white fishnet stockings and tattoos. Cyndi Lauper’s “She Bop” started playing as Ms. Blood worked through her routine. She was hilarious, pulling stunts like showing the crowd a handshake buzzer, then deciding to use it on herself. Yes, in that way. 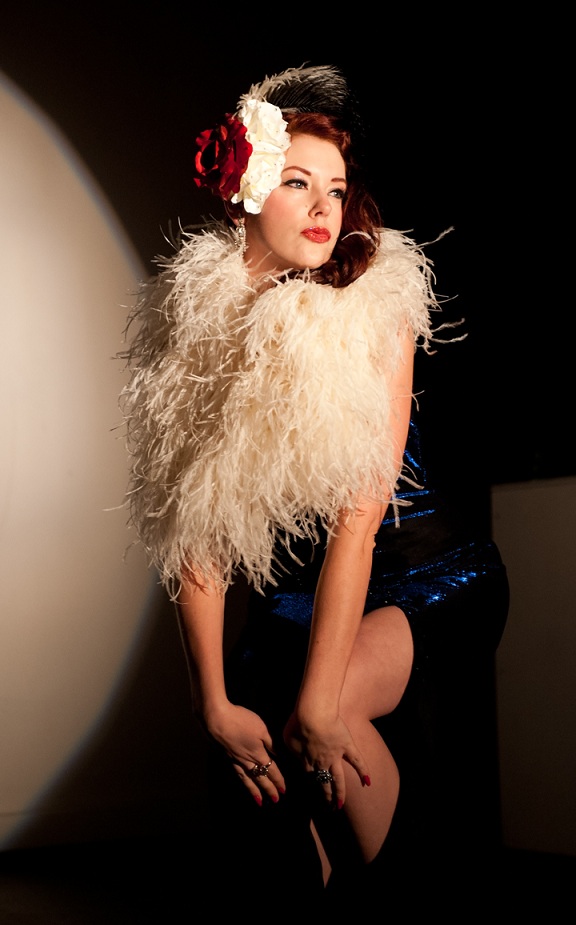 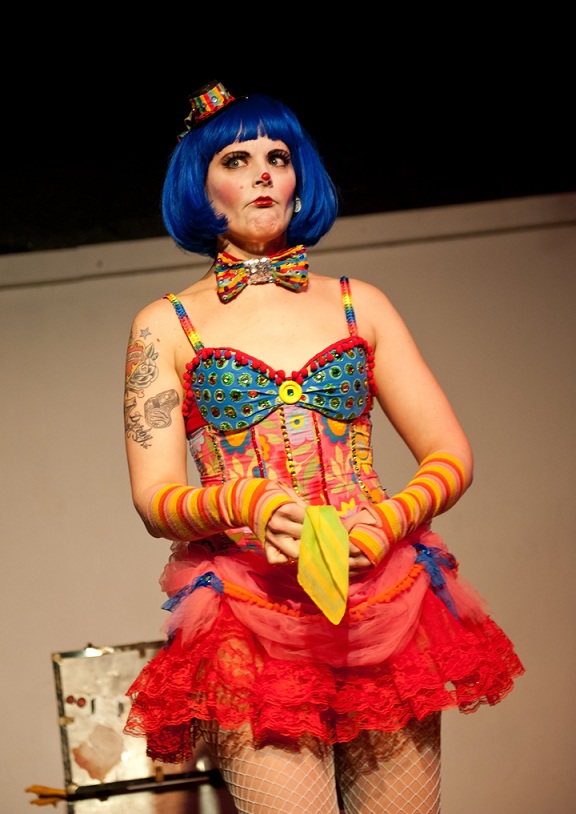 Pinup Angel founder Miss Kitty Baby really took the room back to the swing years, not only with her first song, but also with how shiny she was in her sparkly, ruby red dress and high-gloss lipstick. Saying that she lit up the room is an understatement. Kitty Baby, like many of the women, sports several tattoos, including the MIA/POW symbol between her shoulder blades and the word CASH in giant letters across her lower back. 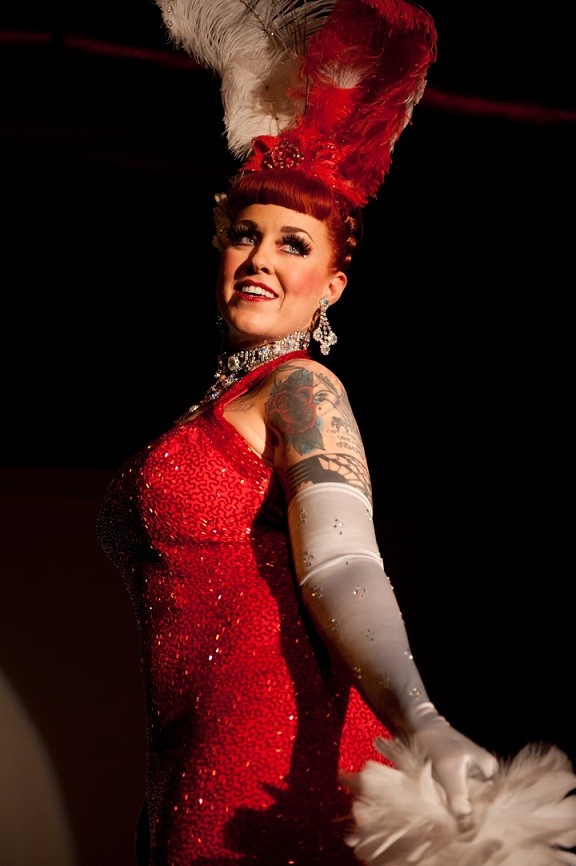 Miss Essie Charm sang “I Enjoy Being a Girl” to start off the second half of the night, in a once again, non-stripping routine. Boom Boom L’Roux was just flat out hot. She started off in a silk black dress and basically hypnotized the whole room all the way down until she was nearly naked. Yowza. 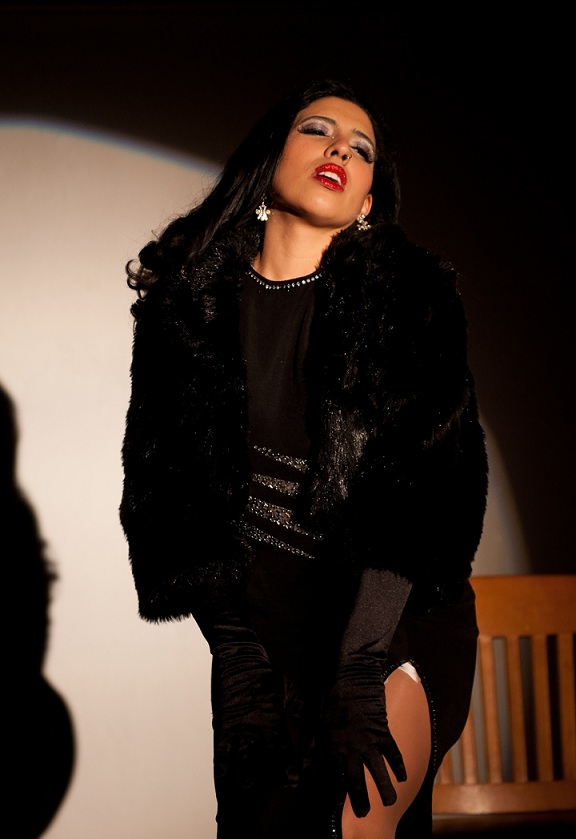 Inga Ingenue wore the naughty Girl Scout outfit for the evening. Literally. With “Big Spender” playing, she tried selling her cookies to a passerby who kept blowing her off. How did she finally win the guy over to have him buy cookies? By removing clothing, of course! 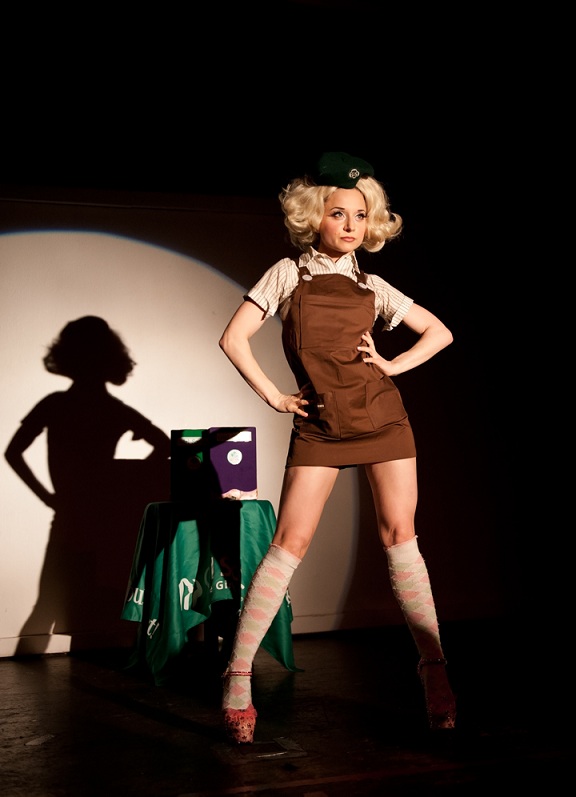 She teased the crowd by slowly removing her uniform and rewarding some crowd members with cookies she kept pulling out of pockets. When she made it down to just her panties, she pulled out one last cookie from her crotch and again teased the crowd. The place went mad with guys and girls cheering for that last cookie. In the end they still cheered as she slowly ate the cookie herself. Lesley Rialto followed that up with a gypsy-like outfit, complete with belly dancing, gyrating and shaking. 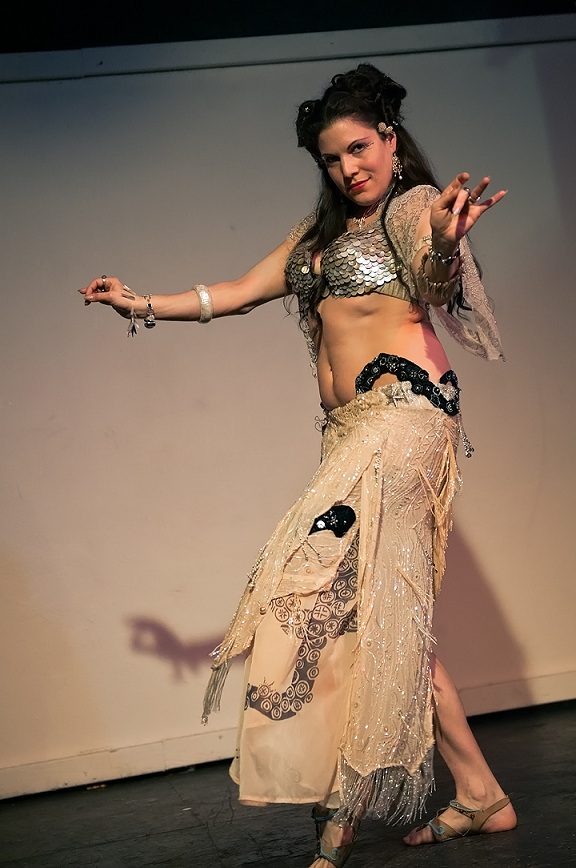 Pigeon Von Tramp stole the show. Wearing a light blue nighty to start off the set, she pranced around as she loaded clothes into a large washing machine. To be honest, her routine wasn’t terribly exciting at first. But when the washing machine was full and Von Tramp was down to a bare minimum of clothing, she took a few steps back, ran and jumped up on top of the washing machine as AC/DC’s “Shook Me All Night Long’s” infamous chorus began to blare over the speakers. Von Tramp shook, portraying the ultimate housewife self-party and the crowd erupted with cheers and laughter for a solid two minutes. It was hilarious and she got a roaring response when her set was over. 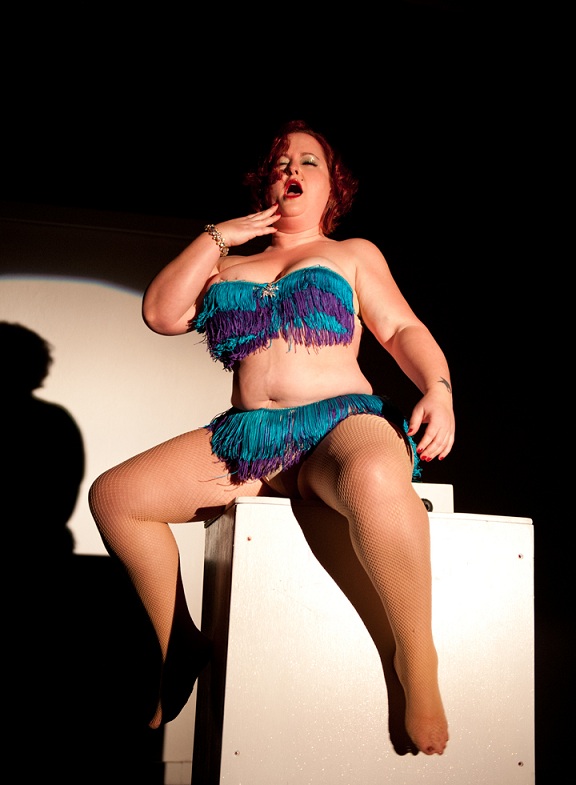 Lady Lydia McLane had a tough act to follow as she visited us from Oklahoma, dressed up as a southern belle in yellow. She seemed very professional, and she even took the show down into the aisles briefly, before ending with making her pasties twirl all around. 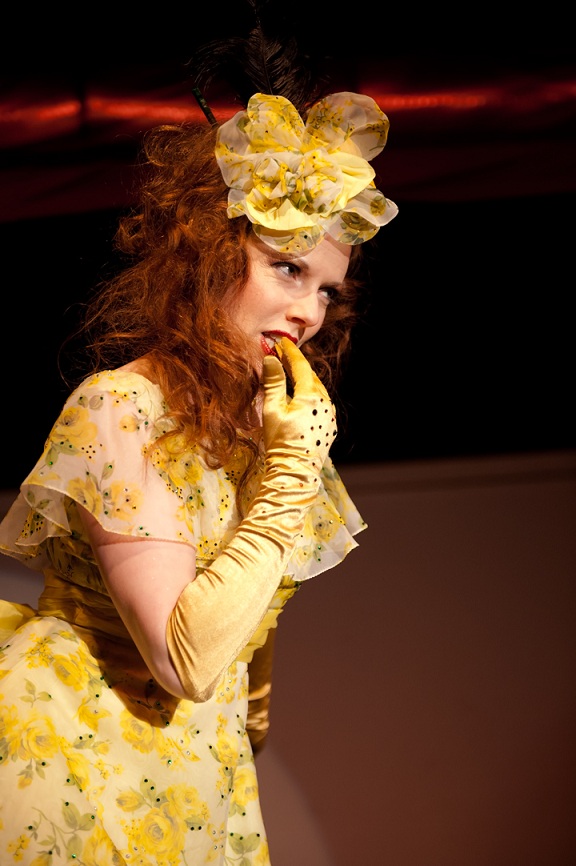 The sentiment of being classy set the tone in the room and really is a large part of the show. Sure, all of the women had beautiful clothing, top of the line makeup, sexy music to dance to, nice smelling perfume and great dance moves. But not all of them, most in fact, would be considered “Stripper Thin.” What I mean is that some of these women, when seen on the street, would be considered “okay” by the average man and “normal” by the average woman. But none of that mattered this evening.

I’ve been in strip clubs where there were women who were overweight and, truthfully, I simply didn’t find them very attractive. However, pretty much all of the women at this Pinups event had a certain sexiness to them. I definitely caught myself being attracted to them all through the show, whether it be from lust or appreciation of performance. Strippers often look like they’ve thrown their morals and self-esteem right out the door. These women were real, and you could tell they felt sexy. When the crowd roared to back that up, it only made them get a little more sexy, swanky and sultry. The combined efforts of audience and performer definitely ensured the show would be a success right from the get-go.

Miss Kitty Baby, a former Marine herself, really has a great thing going on with The Pinup Angels. The women who perform appear to love the attention they receive. The crowds that show up appear to love the performances put on. And troops overseas get wonderful care packages as a thank you for serving our country. This really seems like a win-win-win for all parties.