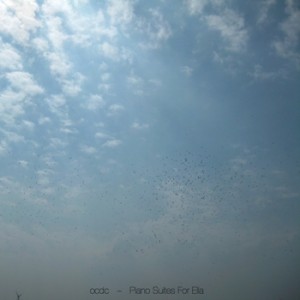 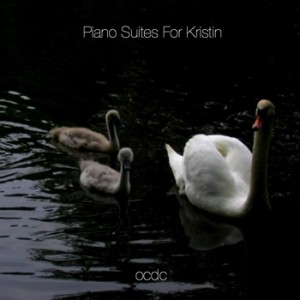 At first I began this interview by trying to consider where in the music spectrum I would place the London-based pianistÂ Rory Dickenson who plays under the name of OCDC. Contemporary classical sounds like an oxymoron and since weâ€™re Randomville, perhaps it is best not to categorize anyway. All I know is, in the Myspace and music blog world, these two albums are a lucky find.

Taken as a whole, these two instrumental albums by OCDC are either short pieces to accompany movies in your own head or sound vehicles to invoke and enhance your emotions. Perhaps it all depends on your frame of mind.

The songs on Piano Suites For Ella, are mostly unadorned by any other instruments, but are rather augmented by sometimes too-quiet field recordings. Written for the composerâ€™s little sister, the sometimes quietly unnerving melodies get juxtaposed with everything from a librarian to children playing. Because these sound effects are taken directly from the composerâ€™s life, they act as a narrative to a story the listener is left to fill in. OCDCâ€™s compositions are at once familiar and distant on â€œElla.â€ The standout tracks are: â€œI. The day you were born,â€ â€œâ€œIV Penny & Adrian,â€ and the closer â€œVII Gymnastics.â€

Piano Suites for Kristin, doesnâ€™t come with background sound effects, but that doesnâ€™t mean it is less fleshed out. Indeed, the opener â€œI. Ivyâ€ sets a very strong mood that is at once reminiscent of Erik Satieâ€™s work, and yet is also fully contemporary. Though these songs lack the background noises of Ella, their sparseness actually brings out the more personal aspects of each composition. Itâ€™s as if the artist left a record button on while constructing a mini opus and we were left to hear this unintended snapshot as a reminder. And so much the better for us. Stand out songs on Kristin besides â€œI. Ivyâ€ are â€œIX. Christingleâ€ and â€œVI. Wreaths.â€

Note: I happened to randomly receive a mix cd with two songs by Â OCDC. This inspired me to do some digging, Â resulting in some very cool back and forth emails and what I hope is one of the more interesting interviews for Randomville.

1. One assumes with album titles like Piano suites for Ella, and Piano suites for Kristin that these albums are meant for one person, and yet they have a soundtrack feel to them. Is there a movie in your head playing when you compose, or is it more intuitive?

OCDC: I can only write coherently if what I write is defined by someone else. When I was writing for Kristin and for Ella, I tried to make segments of their lives and their memories into notes and sounds. When I write, I’m pretty impossible to myself and to everyone else â€“ I drink a lot of wine and I smoke and I have to be completely alone. I didn’t have a cell phone forÂ four years because I could never answer it. I’m not a very talented musician, so it’s very easy for the internal world to be punctured by the external, the real. The music in the end often has mistakes in it, which I don’t have the heart to correct because it would seem untruthful. And besides, I’m very impatient. I think a lot of solo piano sounds like soundtrack music. I don’t know much about movies, but I am a big fan of ‘Fishing with John.’

2. On Piano Suites For Ella you documentÂ  what was happening during the time of composing each song. Elsewhere, on your Myspace blog post, you ask that people share their stories with you concerning the music. Do you get a better sense of where music takes people that way?

OCDC:Â On Ella, I just wanted to document the suburbia outside my window that has already faded away. The music I like connects me geographically to places I know, and places I’ve never been. I think of a New York I’ve never known in the music of Arthur Russell and Moondog, but I think of the London suburbs I do know in the music of Ian Durie, The Stranglers and Squeeze. This idiot-savant relationship fascinates me. I want to know where people are geographically when they listen to my music. I don’t care much for emotional response â€“ that’s personal.

3. I know I was inspired to write you after hearing your work. But me aside, though, have you received any emails or letters from people that have struck you in any way?

OCDC: Lets talk about your letter, Evan. You wrote to me and told me you’d been in the park. It was winter. There was an empty swimming pool nearby with birds hopping about. You were listening to my album, although you didn’t know who I was. You sent a photograph of the swimming pool. It reminded me of Holden Caulfield dropping his sister’s vinyl on the pavement â€“ I talked to people about what you wrote. It was brilliant.

Post, as in papery, hand bound letters that slip through the letterbox, is magic. I love it so much when you open up a letter made for you, and there’s a bit of soul inside that floats out. I’m a vampire â€“ write me. 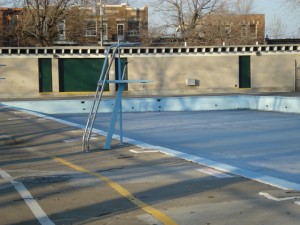 The image I sent Rory

4. The sort of quiet loneliness and moody atmospherics of your work reminds me of both Erik Satie and David Pajo’s work as Papa M. and yet there is the cinematic quality and the fact these songs were written for specific people. Which out of these three areas would you say influences your music the most?

OCDC:Â Well yeah just like everyone else with a pair of ears, I love Satie and Papa M. I’d just about say that “Glad You’re Here With Me” contains some of the finest lyrics written by anyone in the last hundred years. I’m not trying to be atmospheric and I’m not lonely in my own company, I just like the sound of the piano, and the fine way the sound decays. Most of all though, I’m inspired by women and men and children and dogs and clouds and tree houses and Bill Callahan, who is all of the above.

5. Are there any upcoming performances, or new recordings?

OCDC:Â In March I was playing for the noted Newcastle promoters NO-FI, supporting semi-legendary noise artists Aufgehoben. I set up the acoustic upright piano with one mic for the PA, and one mic going into a loop pedal to capture and sample all the little wooden creaks and hisses of the strained piano frame. Anyway, this was the first time I’d ever played a piano in public like this, and it was going surprisingly well. People were listening quietly and the room was silent.

Suddenly, over my shoulder, I’m aware of the door flying open and a bright light entering the room. There’s a loud whirring sound and people that are sitting on the floor have to clamber out the way as this little drunk guy in one of those all terrain electric wheelchairs comes bombing through, really fast. As he goes past, the sound of his chair gets sampled into the loop. He gets to the bar and raises his chair up electrically. It beeps like a lorry reversing. That gets sampled too. He buys a pint of beer, downs it in one, then there’s more beeping, he turns round and races out again. I’m still playing, but I’m aware that in the background, semi-legendary noise artists Aufgehoben are slapping their thighs and crying with laughter at this scene and the accompanying soundtrack. I haven’t played live since.

Anyway, I’m not sure people want to come out and listen to improvised piano work in the current pop climate. We want Lady Gaga. Well, I do.

6. What’s the best way to reach you and buy your music?

OCDC:Â Write to me at: subverbia@gmail.com. I’ll always write back.

7. Tell us something you want us to know.

Two things. Firstly, I think graphic novels are the highest form of individual art. I love Jim Woodring and Jason and Jeffrey Lewis’ comics and I urge you to give them your money. Secondly, I’m quite brown at the moment. It’s been very sunny, and I planted mint and thyme in pots outside the other day. I like to watch them growing. Occasionally, I kill and eat them in my food.

And on myspace here.

And on Last.fm here.