One of the main things we like to do around here at Randomville is “help out the little guy.” It’s something we thrive on, as many have helped us out in the past…and we’re little guys.

Saturday April 18th is once again the annual Record Store Day and we encourage you to get out of the house, go down to a local record store (if you have any still) and buy up some vinyl, rarities, or brand new cds. In a world littered with Amazon and iTunes, it’s kosher to remember that small, independent record stores are an important part of American Music History. Plus, you’ll get a LOT of knowledge from their employees if you ask for it.

Don’t know where to find a place? Well, here are a few record stores in a few select cities and even if you don’t live in one of these cities, maybe you could tell a friend who does live near there to go hit it up? Regardless, just go out and spend some of that tax-return money at a record store!!
Albuquerque, NM

The best record store in Albuquerque, NM is Charley’s 33’s and CD’s.  It has a great selection that you can’t find at the major chains, the owners are cool as hell and their prices are great.  They also don’t rip you off when you trade in some albums.

Scott Wishart of Lunchbox Records says that “last year Record Store Day was his second biggest day in overall sales….the first biggest was his 33 1/3 birthday sale.” Wishart claims that the majority of what he stocks is stuff you can’t find anywhere else, (definitely not Best Buy) and he specializes in indie, funk and metal. He LOVES what he does more than anything else, which is the best part.
Lunchbox Records
1419 A Central Ave.
Charlotte, NC 28205
(704)222-0788
www.lunchboxrecords.com

Lou’s Records is the best record store in southern California, ask anybody.

Amoeba Records. Hands down. No competition.
It’s about the size of a friggin WalMart. I kid you not. They have about twenty registers. I think of it as a mecca for audiophiles. You must go once in your life. New & Used LP, CD, DVD, VHS, posters, SOOO much music related stuff.

For 50’s and 60’s jazz as well as obscure psychedelica, there is Beatnick. 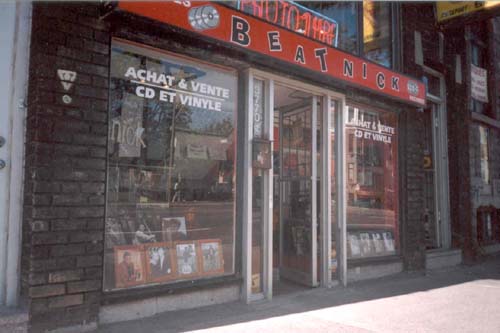 Finally, just for the sheer chutzpah factor in name alone there is Paul’s Boutique.

There’s the 5th Avenue Record and Tape store in my neighborhood, Park Slope. It’s definitely a mom and pop space. Usually, they have stacks of records in bins on card tables. What are even cooler are the oldies but goodies – whether it be rock, soul or r&b playing and it just pulls you in. It’s a small, feel good space and you’re bound to find something to take home for yourself or someone else.

There’s also Eat Records where you can shop for vinyl and get a bit to eat!

Easy Street Records: Even better selection, a little pricier, and the status of being one of the cool kids.

Cellophane Square: Perennial favorite. I once overheard a conversation between employees at this store that went something like this:

“Who do you think would win in a fight? Elliott Smith or Johnny Cash?”
Almost simultaneously, three voices chimed in, “Johnny Cash.”
“But Elliott Smith did stab himself to death in the heart.”
“Still, dude.”

You’ll have to do some digging, but there are literally hundreds of thousands of pieces of vinyl there. Boxes and crates and bins and back rooms and even a basement full of delicious vinyl.

Colin, Johnny and Thom from Radiohead have been there.
I think Bop Street’s business card says something like:
“Your shop takes the cake in the country” ~ Johnny Greenwood.
I completely agree.

4000 Holes used to be THE ONLY cool, independent record shop in town. Everything else was corporate mall franchises. Not sure if that is still the case (as I live in Seattle now), but they definitely deserve some cred.

4000 Holes was not only the hot spot for local music, but also our gateway to all the cool music shows going in Seattle too. Love that place. It will always hold a special place in my heart as the first indie record store I ever experienced at seventeen years of age (in 1994). It changed my life.

Looks like Spokane now has one other indie record shop called Unified Groove Merchants. Not sure how long it’s been in business, but it boasts to be “the Region’s Largest Independent ‘Record’ Shop.”