It’s 4:30 in the afternoon and Michael Beauchamp is torn. Is it too early to have a beer? “I’ll get one if you get one,” he says. He’s also concerned about food. If he eats now, will his appetite remain for dinner? His partner Laurel Premo looks on with amusement at the high drama unfolding before her. 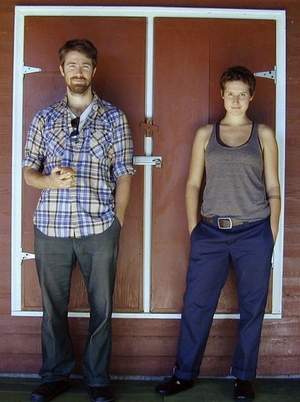 Beauchamp is already enjoying a green tea as he fidgets with the wet bag in his cup. After some more fist-wrangling, he decides to order a single slice of pizza, no beer.

Though they carry iPhones and get worked up over the ebbs and flows of the NBA season, at heart, Red Tail Ring are throwbacks to a blood-stained, sepia-toned America. They are the torchbearers of a long perished generation of storytellers and working class minstrels.

Beauchamp and Premo spend their nights picking Appalachian love songs and murder ballads off dusty banjo strings as effortlessly as a vintner picks grapes off of a vine. But their minimalistic, nearly cryptic sound is two-fold. Red Tail Ring’s music can be used to illuminate a progressive forward direction, and yet it is a tool used to clearly decipher the echoes and ethos of distant time, one that often comes across as less than idyllic.

Like Jonas in Lois Lowry’s groundbreaking children’s novel The Giver, Beauchamp and Premo see their social roles as both historian and contemporary philosopher.

“We love this old mountain music, but we weren’t born there. We were born inMichigan. We’re not apologizing for not being mountaineers. We love that music and play it. Were just trying to be genuine to where we are at, in time, even,” Premo explained.

Red Tail Ring have recently unveiled their newest undertaking, a split LP titled Middle West Chant and Mountain Shout, a self-released collection of music.  “Chant” is comprised of 12 original, contemporary folk songs and “Shout” is a document of traditional Appalachian tunes, some dating back well over 200 years.

It may seem at first a lofty proposition, releasing two full albums, both of which come on the heels of 2010’s August Roads EP, but Beauchamp and Primoare are highly driven, no nonsense folks. Sort of.

“As songwriters now beyond solo acts, we’re trying to write less about personal love stories. We love that, but we’re trying to do more storytelling of an old story, a fable that needs to be shared, or writing news stories.  I think we take pride in the kind of folk tradition of finding so many different versions and mixing them with what is in our hearts and ears,” Premo said.

“There is a lot of murder on these two albums. There’s something about the claw hammer banjo that lends itself to singing about murder,” Beauchamp mused, while quietly sipping his tea.

The duality of Beauchamp and Premo is one of their many admirable traits. They are both fun loving, thoroughly modern people. They enjoy listening to Radiohead and playing sports (maybe even at the same time), yet they have an unceasing desire to dig through the trials and tribulations of an ever changing American landscape.

However Red Tail Ring aren’t just stuffy musical historians, they have silly, playful tendencies as well. The duo’s irreverence can occasionally spill out into their live show. During a gig over the winter with Kalamazoo’s Graham Parsons and Portland Maine’s Putnam Smith, Beauchamp and Primo dubbed the evening “beach night,” and showed up in flip flops and bathing gear. “I need performance art in my life. Maybe this is the venue for it, maybe not,” Premo mused.

Though you may not find Beauchamp and Premo interpretive dancing to a Stephen Foster ballad, you will see Premo’s many artistic skills pour out in other areas, including the visual aspect of the group’s most recent release, as Premo created the artwork for both Middlewest Chant and MountainShout.

“It is really a primary colored thing. The Middlwest Chant one is kind of a scene from Michigan, something glacier like with a forest and trees. The other one is mountains…both are landscape-esq,” Premo said.

If her description of the artwork seems a bit vague, it may be because there is no easy way to describe Red Tail Ring. Their sound is at times minimalistic to the point where you swear you can hear the temperature change in the recording room. Yet each song is overflowing with passion, emotion and the souls of two people who not only love what they’re doing, but love the life they lead.

If nothing else, Red Tail Ring is the guiding light for a new generation of musicians and artists who simultaneously use their hearts to illuminate the road ahead while enlisting their ears and their minds to transcribe the whispers of a lost but hopefully not forgotten America. 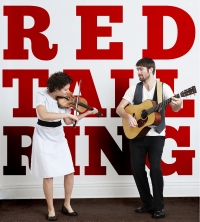