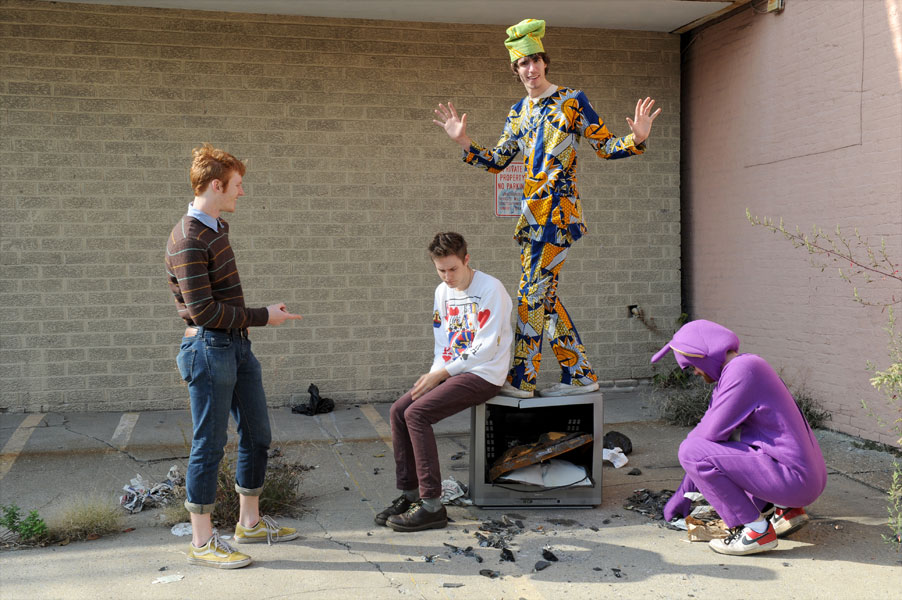 Athens, Georg quartet Reptar have just released their debut EP, Oblangle Fizz Y’All. Reptar consists of Andrew McFarland, Ryan Engleberger, Graham Ulicny, and William Kennedy. Oblangle Fizz Ya’ll is a mixture of art-school punk combined with a quirkiness that may very well set the band apart from their peers. With their energetic live shows, Reptar recently opened for Matt & Kim, and is sure to gain new fans when they open for Foster The People this fall. They were kind enough to speak with Randomville from the road.

Randomville: I saw you guys on tour with Matt & Kim in Baltimore – your live show was quite impressive. How did that tour come about? What was it like touring with Matt & Kim?

We actually only did two shows with them. The shows went really well, and captured a lot of energy. [Matt and Kim] are really fun people, and we have a lot of fun when we play. That was a really good pairing, and very encouraging.

Many of the songs on Oblangle Fizz Ya’ll have complex arrangements. Is that hard to replicate live?

It’s definitely been a challenge. We’ve added a fifth member to play electronic drums, and keyboards percussion that help augment the sound create the layered sounds you hear from the album.

Oblangle Fizz Ya’ll is a mesh of sounds and influence, yet it has its own feel. What’s your thought process when writing songs and recording?

To make music people dance to. But also to try and make it interesting. Creating at atmosphere that is universal, but also deeper. There’s also this cathartic element and dealing with emotions.

The trumpet solo in “Context Clues” takes the song to a whole other level. How did that come about?

It was actually a bunch of friends who play in[other] bands. When we play in Athens, we have them play with us. We wanted to have that song be super epic and make it a real rock & roll song. It’s definitely a different than the rest. We were listening to jazz and complex horn arrangements. We don’t play it live much because it’s hard to reproduce.

You guys recently played Lollapalooza. What was it like to be playing to that big a crowd?

To me, it looked like this massive horde of people. It was ominous, but in a positive way. I ate octopus beforehand, and it kind of made me a little trippy to see all those heads out there.

You guys are from Athens, Georgia, which has a pretty big legacy of music. R.E.M. and the B-52s came from there.

I think one of the things that’s cool about Athens is that it always re-invents itself. Since the University of Georgia is there, there are constantly new people. A large percentage of the people change – it still has a lot of energy. There are so many bands from Athens…we’re all one big community. Quiet Hoves has been a big influence on us.

Reptar is the name of a green dinosaur from Rugrats. What gave you the idea to call the band that?

Everybody is misinformed! Rugrats stole the name from us. Andrew (the drummer) has a tradition in his family that every male gets a tattoo three days after they’re born. Nickeledeon got it from a similar source. It’s been in [his] family for so long, and I guess they just kind of dealt with it.

What’s next for you guys?

We’re playing some shows with Foster The People, and they’re in some pretty big venues. They’ve been selling out a lot of shows. We’re going to be playing early every night – it’s going to be crazy, but a lot of fun. After that, we’re going to straight into another tour, then into pre-production, and then possibly into reproduction. (Laughs.)