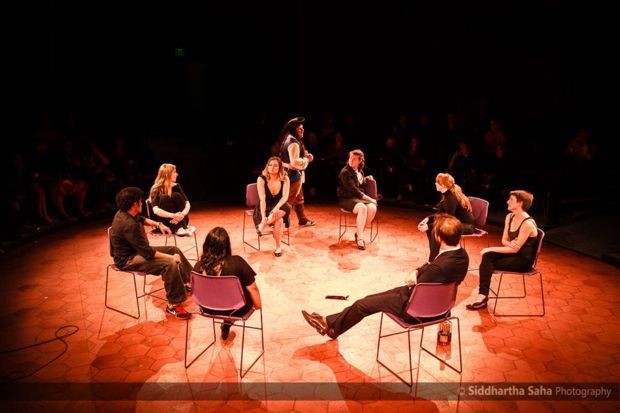 As previewed here, Seattle SoundBYTES is a Seattle a capella group who has recently created two musicals based on popular movies like The Hangover, Pirates of the Caribbean, and Ocean’s Eleven. Their most recent effort, Jack Sparrow: A Musical, had two shows on May 18th, 2012 at the Penthouse Theatre on the University of Washington campus.

The show felt very much like what it was: a student play, although not as developed story-wise. As a result, the addition of film references made it feel random instead of like an homage; it felt a lot like an improv show. However, the group was successful at developing characters that triggered emotional reactions from the audience, even if the characters were not of their own creation as they played off stereotypes and movie references (a cat burglar, hacker, counterfeiter, pickpocket, muscle mastermind, and a distraction comprising the characters) making it feel like forced improv.

There was a frailty and intimacy in their performance that is rare to stage productions, partially because of the small venue where you could hear every cough or program crinkle, and because it was evident that not all of the singers were comfortable on stage yet. The elementary-feeling acting surprised me as I felt like I was watching Glee sometimes because the songs occurred at very obvious times. None of these things are inherently bad but there is room for development if they want the humor, story, and acting in their musicals to match the quality of their singing. Regardless, it’s a necessary step in evolving as artists–deciding what works and learning to arrange music, and innovating.

Their arrangement of “Mad World/Sound of Silence” garnered many “Oooh I love this song” reactions from the audience, but their “Daft Punk Medley” was rather monotone. Even though I knew it was a musical and wasn’t expecting such a strong story element, I entered the show excited and concentrated on the music. All of the singers had lovely voices and sometimes the songs weren’t suited to the soloists’ voices, but that’s the price of having a group dynamic where everyone gets equal stage time. The show was an excellent effort in creating something new, in trying to create an interactive musical that engaged the audience, but I left confused as to what the group wants to be. An a capella group that arranges their own music, or musical writers and actors? Their singing is strong. Their voices are beautiful and they have respectable vocal stamina, energy, expressiveness, and range as a group and individuals. Ambar Choudhury’s vocal percussion was especially impressive, as was the effort, energy, passion, and efforts in creating a world. Their first CD can be bought here.