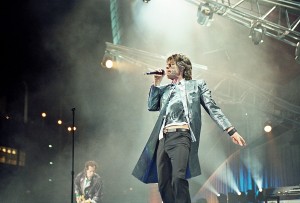 The Rolling Stones are planning on celebrating their 50th anniversary in style.  Mick Jagger, Keith Richards, Charlie Watts, and Ronnie Wood will be doing two shows in the UK and two in the US.  The London O2 Arena will be packed to capacity on November 25th and 29th for two separate shows from the iconic hometown band.  The United States will have their chance to see the legendary Stones on December 13th and 15th at the Prudential Center in New Jersey.  Tickets for the shows in London go on sale October 19th, but presale tickets are available now.  The fans in the United States will have their first shot at tickets on October 20th during a presale.  Tickets will go on sale to the general public the following Saturday, October 26th.