It takes a particular being to survive camping in the desert. And planning. When we got back to our tents last night after the show they had frost on them. I don’t know the temperature but I’d guess and say it was around the 40 degree range. It was effing cold! Then in a switch, the heat of the sun woke us up at about 9am. Going to sleep at 2:30 required ear plugs because Sasquatch! campers stay up late and loud each night. All night.

I’m feeling good though and no hints of exhaustion, so it’s full steam ahead today. The Head and the Heart were on the main stage afternoon to a pretty packed audience. The crowd really did know most of their songs (they are fairly local, anyhow) and the hillside was full of kids dancing, singing and smiling. And on the stage too. When H&H played their signature song “Lost In My Mind,” I’m not sure what was louder: The thousands of people singing along or the presence of pot that lit up. [Side note: It really is remarkable how you value fresh air at outdoor venues sometimes because of the excessive pot smoke. Don’t kids breathe OXYGEN these days??] But this song really did create a beautiful site. Dancers came out on stage out of nowhere to party down with the band and up on the hill, there must have been over 300 people arm-in-arm lined up in a row singing along. That song is taking off, taking the band with them.

The only real downfall I thought was the song “Down in the Valley.” Singer John Martyn has to go down deep into a husky voice for certain parts of this song. While it is a pretty ballad, this was a really large, outdoor venue and it just seemed like the tempo and song in general were too slow; the intimacy was lost. From listening to their record I wondered what they would be like live in concert as I hoped they would not be a boring live show like The Shins. The Head and the Heart were anything but. I think going forward that basic fans will find these large outdoor shows okay, true fans will love it, and the real gold will be in large theatres with good acoustics. I think I would rather see them there instead of at a large stage outside again.

Aloe Blacc was 20 minutes late and I always quickly lose my patience at late start times. It might not be his fault, but I think it might have put me mildly biased to start. His band was dressed really sharp in different colored outfits. Blacc himself had a good looking purple long sleeved shirt on, with a gray vest. They looked smooth. “My name is Aloe Blaac and we are going to play some soul music” is how he started off the show. The guy can shake and move as he shimmied all over the stage. For one tune he gave homage to James Brown, Marvin Gaye, Stevie Wonder and Al Green, doing little dances after mentioning each of them. The song “You Make Me Smile” seemed like it lasted 20 minutes and it was just too slow and dreary of a song. There is a lot of soul and Motown music flowing around these days (The big three are here: Sharon Jones and the Dap Kings, Black Joe Lewis and The Honeybears, Fitz and The Tantrums) and I’m not sure Blacc’s band has enough pep and pop to make it. They really just seemed kind of flat and the set was nothing special. With set lists of just less than one hour, bands need to bring their A-game and play their best stuff. “You Make Me Smile” really brought things down. Blacc did have very good call-and-response skills though and their hit song “I Need A Dollar” was nice to here live, with an appreciating crowd. 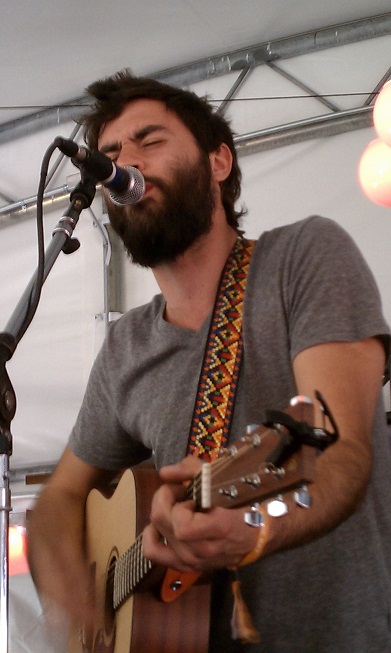 Next up we found out about a special acoustic show that RedLaser was putting on (they have acoustic performances all weekend long) today with The Head and The Heart. This time it was only John Martyn, Charity Rose, and Josiah Johnson. This performance was much different than the earlier show. This time when they played “Down in the Valley,” the hushed crowd and tense vibe really made it feel like Martyn WAS asking for “mercy for his rough and rowdy ways.” Band member Kenny Hensley came out to strum the acoustic while the trio sang “Winter Song.” This time “Lost in my Mind” was way more intimate with clap-alongs and so much loud singing from the crowd that ear plugs were nearly needed. Johnson and Rose moved together from mic to mic and this whole moment was truly just that: A moment in time. It was a celebration of the festival, and of life, really. I can’t say it enough times: That song is magical. They finished up with “Ghosts” and Rose finally took her big sun glasses off to show off her soft, blue eyes. The song still had a spooky vibe played live, yet the playful chorus and foot stomping fun had the song end on a bright and cheery note. The crowd completely went nuts when they finished their last song. It sounds like this performance and many more will be playing on 107.7 The End the rest of the weekend and longer. 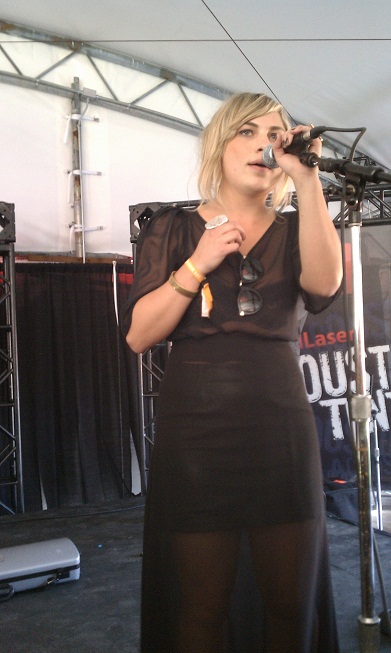 I would really like to give a good shout out to RedLaser as their phone and app technology really makes finding information easier for us all. They are doing a remarkable job with special performances this weekend out here. I’m sure we will cross paths with them more this weekend.

It was a really interesting scene leading up to The Glitch Mob. They took a really long time getting to the stage and the crowd at their tent was giddy, excited, growing impatient…and waiting for their drugs to kick in. The big bass boys were going to be followed by Sleigh Bells and BASSNECTAR tonight, so this was like waiting for the big buzz to kick in. It was an almost spooky scene in the crowd, like danger. But when they did begin, the bass just moved through bodies like warm tea down the throat, and people began to move in every way imaginable. The crowd was nothing but a sea of hands and you really felt like you were just flowing on waves in the middle of it all. 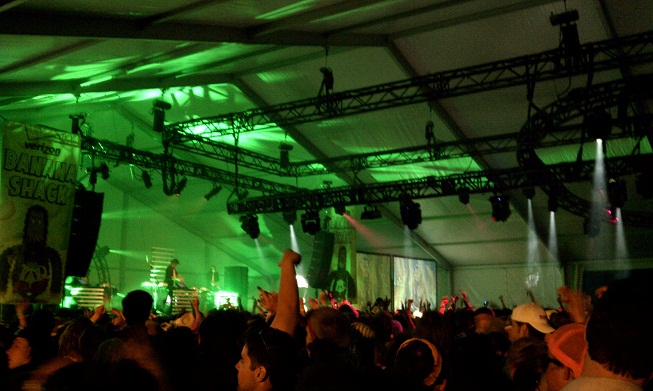 Ed Ma might have had even more enthusiasm than the crowd as he constantly yelled to the crowd to bring more noise and he was seemingly punching ghosts during the whole Glitch set. The deep bass beats are okay, but it started getting repetitive, so I left to go walk around.

I had more fun this morning choosing which socks I was going to wear at the festival today than watching two songs by Bright Eyes. So I moved on to go see Robyn, but her stage was late all day so Glitch Mob sucked me back in with the partying. On the ceiling of their tent, an impressive light and strobe show was dancing on the ceiling, along with psychedelic videos playing on four screens. There was rarely a small pupil eye in sight. Total joy for ravers in a total rave scene.

Once I heard Robyn begin, I left to go check her out. She wore a silly outfit, had a silly haircut, and made silly noises into the mic. It really was a lame gimmick. She’s like Lady Gaga without the talent. Wait, did I just write that??? About two songs into her set I could hear The Glitch Mob playing what sounded like the beat to The White Stripes’ “Seven Nation Army” so I went running back. Sure enough, they had the original vocals playing and they were creating the beats themselves instead of playing the original guitar parts. For the chorus they slowed down the beat and used synth sounds in place of the guitar. Like European soccer (yeah, I just said soccer) fans all over the world, this crowd began to chant the now popular “Ohhh, oh-oh-oh-oh, Ohh Ohhh” and it really was an awesome thing to witness. The band also welcomed an aerial silks dancer for this song. Okay Glitch Mob, you cats won me over. Well done.

As for Death Cab for Cutie, I feel like I’m SUPPOSED to like them because they are also from Seattle like me, but the truth is I do not. Their show (and their music) is well structured, but simply just not exciting. Even the crowd reacted the same way up on the hill of the main stage as they all just sat around.

I must admit this was my least anticipated day for music from bands, but I’m VERY excited for tomorrow, so I might not report much in order to see as many bands as possible. GO CHECK OUT LAURIEL’S PHOTOS!!!