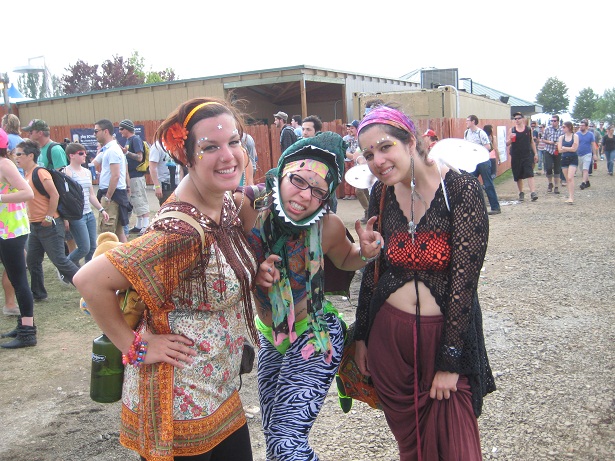 There are MANY crazy outfits at Sasquatch!

Well this has certainly been a Fitz and the Tantrums day. Their main stage show was the first one I caught today and it was nice to lounge in the grass and sun, scoping it out. I’ve seen them before but god damn I was impressed with sax player James King today! And it wasn’t just me; each time (and there were many) he got his solo, the crowd cheered in delight. Lead singer Michael Fitzsimons, as flamboyant and colorful as ever, wore a red velvet suit. “They’re so cool!” this girl behind me said.

“We’re about to turn this into a mother-fucking dance party” Fitz yelled as Noelle Scaggs demanded that the people on the hill get up onto their feet as they launched into “I Got News For You.” And they did. During “Moneygrabber” they demanded all people in the crowd (and up on the hill) to get down low with them on the floor, then said “When the tempo picks up, we want everyone in the crowd to lose their fucking minds!” And they did. 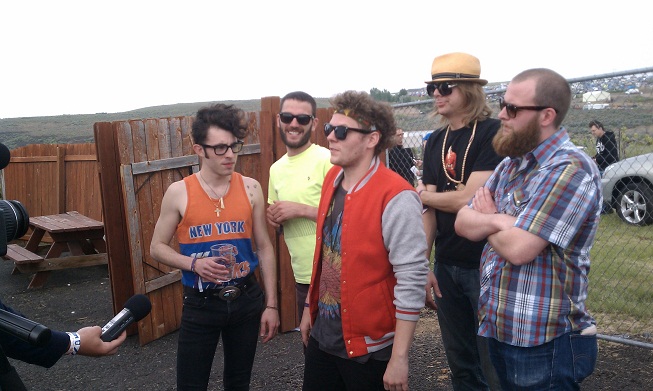 Back in the media room, I ran into Buffalo Madonna from Mad Rad. He got into trouble at Sasquatch! in the past because he climbed the scaffolding of this stage and got up on the roof. I asked him if he was told for this festival not to do that. “Well, I think some of my other band mates were told that, but I wasn’t personally told not to do it.” I told fellow band mate Terry Radjaw that I wasn’t covering them this year because Randomville has covered Mad Rad many times over the years. He understood.

While out on the media patio at first the band Other Lives were kind of like background music to me as I sat in my comfy seat Tweetbooking. Eventually the sound of Elvis Perkins combined with the build ups of Arcade Fire and a touch of the mood from Thom Yorke’s album Eraser began to win me over. It’s no shock that Yorke has actually praised this Oklahoma band after you listen to them a little bit. 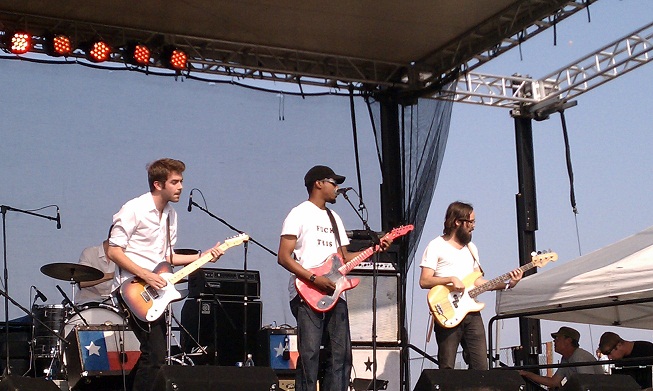 Black Joe Lewis and the Honeybears

When Black Joe Lewis and the Honeybears finally hit the stage, Joe was wearing a t-shirt that said “FUCK THIS.” A little different than what I’ve seen from him in the past. When I interviewed him at Bumbershoot a couple years ago, Joe said that he was tired of playing all the same songs and that it’s hard for him to write material. Well they have a new album called Scandalous now and their first six songs were all from the new album. Lewis played a lot more harmonica today and even though the crowd started off somewhat small, by mid set the whole field was full, and people were partying along up on the hillside. 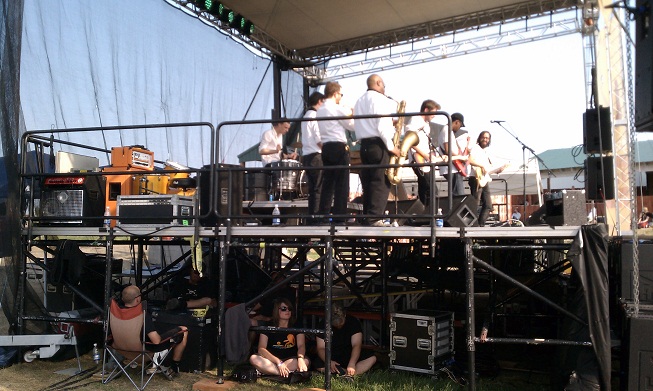 Crew hiding under the stage

Then the crazy fun began. During a cover of “Louie, Louie” several roles of toilet paper began to fly all through the air in the crowd and all hell broke loose. The band bought into the energy and when we thought they were done they started again with an almost punk-like version of “Bird’s the Word.” It took the band a while to wake up, but over time they did and that was probably the best I’ve seen them. Fun show. 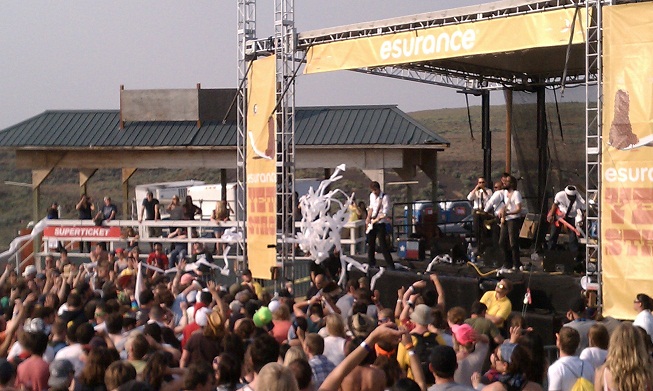 To continue the Fitz day, they were playing the RedLaser stage a little later so Lauriel and I headed over for that. They started off with “Gotta Work It Out” then moved into “The Power of Love” where Noelle really got down with her dancing, sending the crowd insane. The real kicker was when they announced a cover and I figured it would be “Sweet Dreams” as usual, but to my surprise it was a funked out version of “Steady As She Goes” by The Raconteurs. This totally caught the crowd off guard. They finished with “Moneygrabber” and with being up front, we really got a chance to see just how close Fitz and Noelle can be; their stage chemistry is pretty evident. 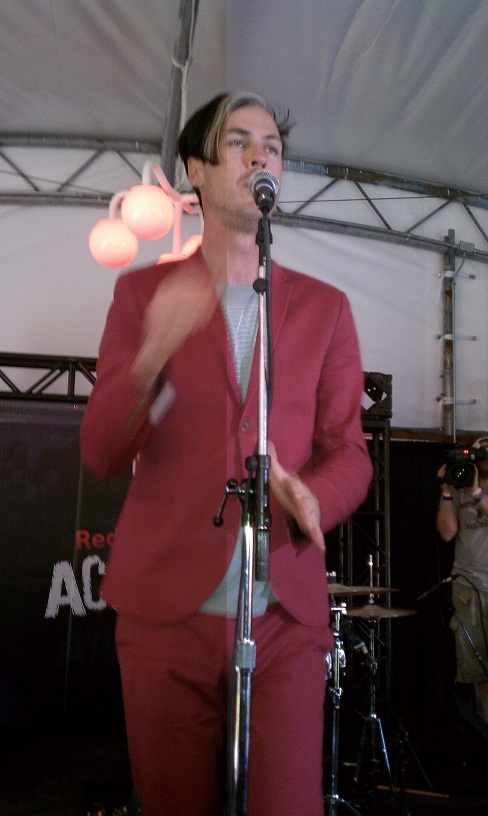 Michael Fitzgerald of Fitz and the Tantrums

I looked at my clock and realized that if I sprinted, I might be able to catch a little bit of Mad Rad. That’s what I did and I was right! I got there just in time to see Buffalo Madonna start climbing the scaffolding, as we had somewhat predicted earlier on Twitter. Madonna also went into the crowd a little, as did Radjaw for “The Youth Die Young.” Madonna really lost his shit for this song, running all over the pit, getting the crowd riled up as he patrolled back and forth on the crowd, jumping into the crowd over and over. God damn it, I just realized I said I wasn’t going to cover Mad Rad this time and I just did. They tricked me! 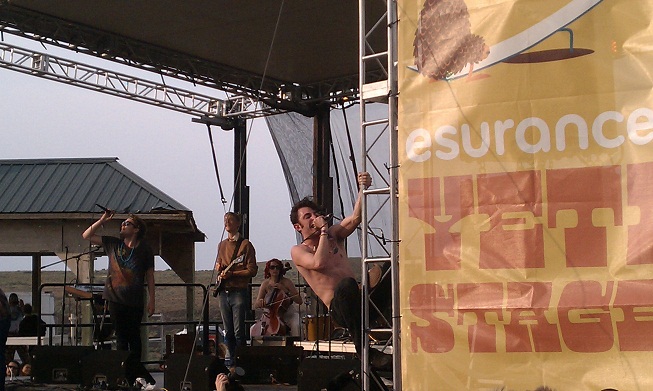 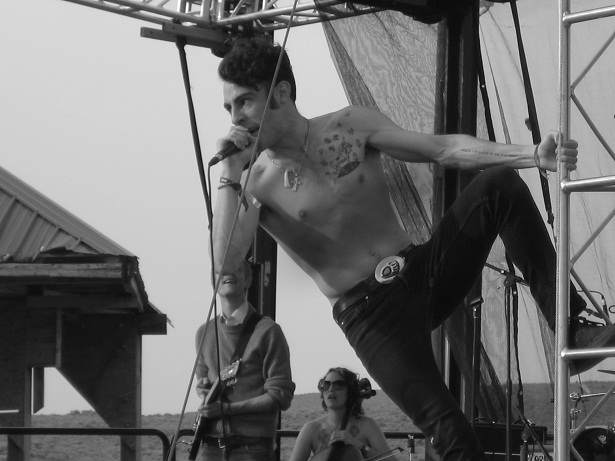 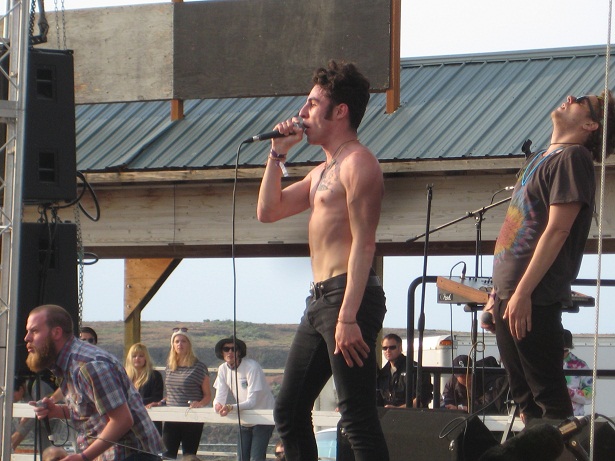 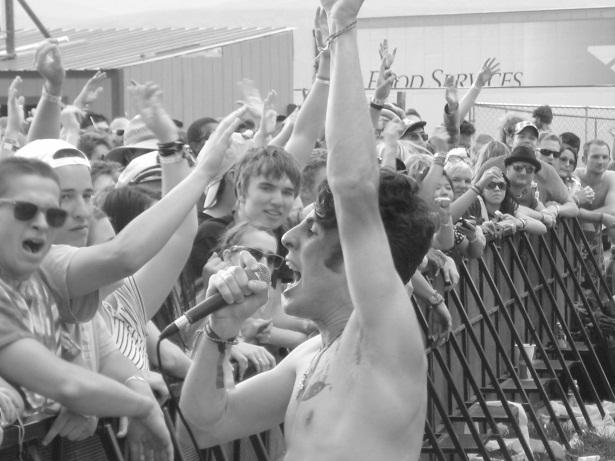 As for the Flaming Lips, Lauriel’s photos will likely prove it, but they are the best “first 15 minutes of a show” band in the world. After that, when the props and girls dancing in Dorothy from The Wizard of Oz costumes sets in, they get kind of boring.

As for this security guard with the mullet, I’ve been waiting all weekend to finally get a picture of him… 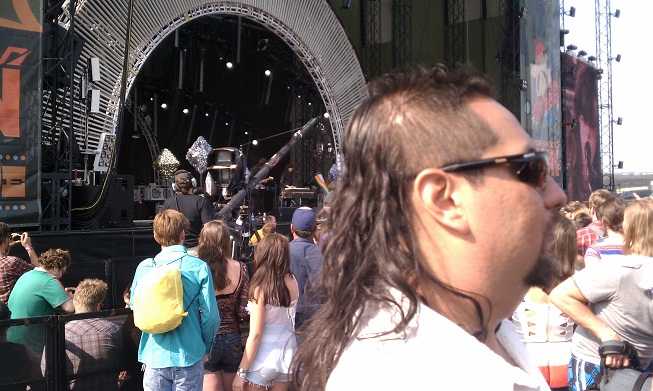 Modest Mouse sounded great. It’s the best I’ve seen them in years, and they were even without Johnny Marr. Singer Isaac Brock was clean and crisp, playing new songs and dipping into classics like “Cowboy Dan” at one point poking fun at a fan when they requested it again.

Sasquatch! 2011: Sunday in photos Sasquatch! 2011: An interview with Fitz and the Tantrums
Copyright 2009 - 2012
Randomville.com ™
All Rights Reserved - Photos Licensed by PR Photos