Have YOU seen the lineup? Holy shit, this is going to be an awesome weekend!

Finally got to see Allen Stone live. By all means he’s a huge credit for being a leader of the recent Seattle young-soul scene. Dude has some talented musicians behind him too. I felt like his sound was kind of lost in such a big atmosphere (he was on the main stage, and the crowd was still coming in the gate when he began) and I would much rather see him in a somewhat small club. Not a bad show though. Mackelmore and Ryan Lewis were actually standing to the side of the stage the whole time during Stone’s set. I thought they might jump in, but they never did. 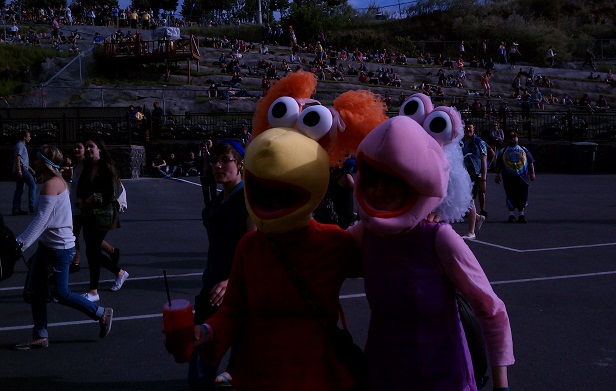 Of Monsters and Men. The first time I heard them on the radio, I thought “Edward Sharpe and the Magnetic Zeroes, Part II.” After seeing them live, I still stand by that thought, though Sharpe is a more energetic show. The crowd loved them though. I’m just not seeing the hype though. 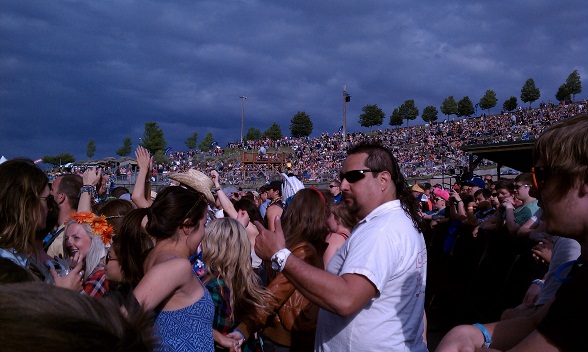 Mullet guy is back in charge again this year!

Next up on the main stage came Santigold, and bring it she did. It only took her a couple of songs to get into her hit song “L.E.S. Artistes” and the already dancing young crowd kicked it up a notch. It was really fun watching the kids dance up on the hill side. They had all just gotten to the show, which requires about two hours of traffic waiting to get in the gate, set up their tents, then finally got exposed to some sun as most of them are probably from Seattle. That makes it PARTY TIME!!

Santigold fed off the energy, singing her R&B as loud and clear as ever. The dancing kids in the front row got lucky when Santigold demanded the kids be let on stage to dance their asses off. And they did. Fun, fun show!

Mark Lanegan, formerly of Screaming Trees/The Gutter Twins, stood on the stage like he didn’t give a f*ck. And he probably doesn’t, rightfully so (do research on that guy sometime). And it reflected in his music; dreary and smokey, just like his voice. Left hand clutched on the mic, right hand a little lower on the mic stand. Dead-locked. He looked down during guitar solos from his guy who looked like a young Michael Douglas. Lanegan himself was wearing a MLB baseball cap low, making sure to cover his eyes. The stringy hair crawling down and out the sides like Neil Young. 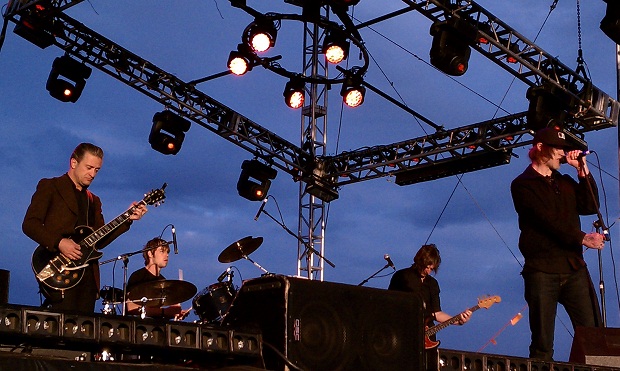 Mark Lanegan and his band

Lanegan has a very unique voice, a gravel-ran baritone that helped pave the way for bands like Murder By Death. It took him until after the third song to nearly whisper out the words “Thanks very much.” There weren’t a lot of people there to see him as the party kids at Santigold likely have no idea who Lanegan is. It was a grown up show. Which was kind of a nice break.

Up next, it’s rumored Macklemore will be playing a surprise show….

I had a dilemma. I heard the Macklemore thing was supposed to go down, but I couldn’t peel myself away from Explosions in the Sky! Such a fantastic, high energy arena-rock band. Yet they are equally, well, just lovely when they slow it down. Reluctantly, I left their amazing set early.

Walking down the hill to the main stage, apparently I missed a spectacle in Girl Talk. They were closing out their last song, with about 8,000 people on stage, confetti and toilet paper flying all over the place. And a first for me: fireworks off the top of the stage! 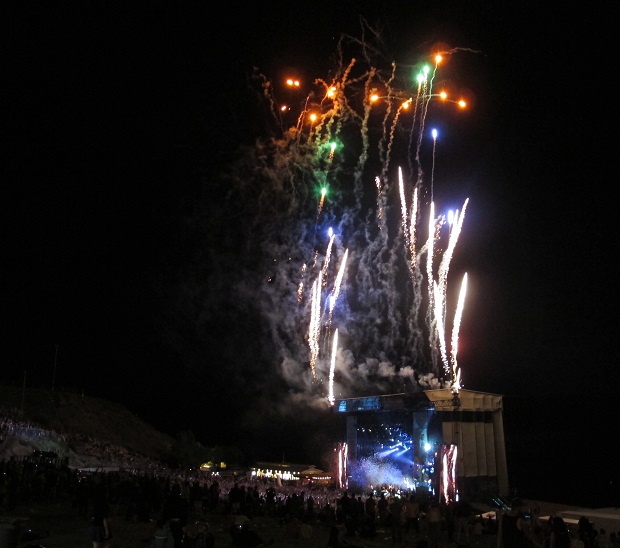 Photo courtesy of The Seattle Times

Down on the ground area, off to the right side, a platform had been erected. I noticed it earlier in the day, but assumed it was for photography or something. Actually, minutes after Girl Talk ended, Mackelmore and his crew climbed up the scaffolding stairs and began to rap. When the spotlight hit him, it took a minute for people to realize who it was, then kids went mad. I was right underneath, like under a floor mat. 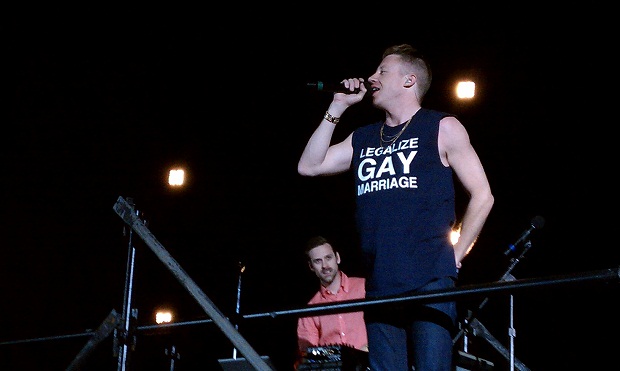 Seriously, the crowd went nuts. When Macklemore walked down the stairs a little bit, young girls lost their minds like it was Michael Jackson in the early 80’s. They were lucky security was around that scaffolding, or it would have been knocked over by mad fans for sure. He’s also a brave soul because he eventually made his way down to high five fans and partially crawl into the crowd. What made the crowd cheer even more was his shirt he eventually revealed that read “Legalize Gay Marriage.” They played three songs, ending with “Irish Celebration.” I’ve never seen anyone do that at this festival, or any festival for that matter. It was huge. 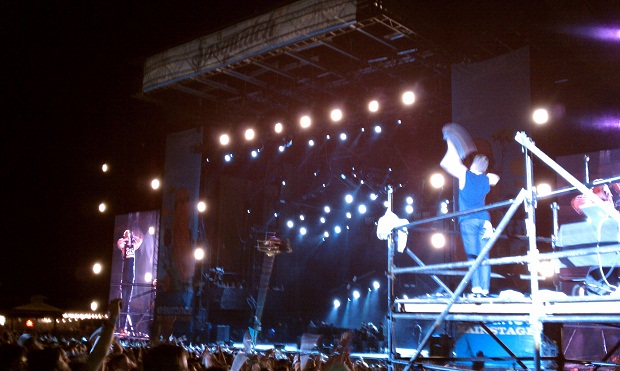 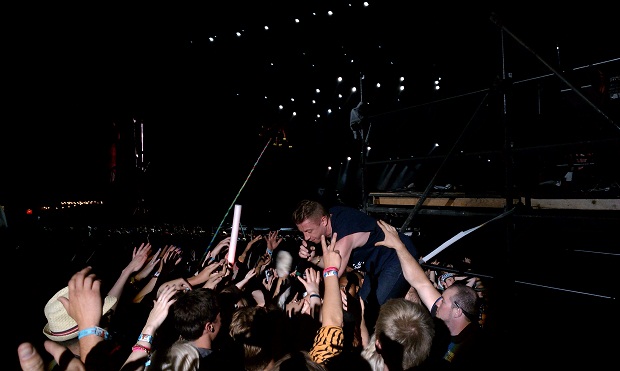 Something that is really warming my heart this weekend is that the Main Stage is playing all Beastie Boys songs in between their artists (the Beasties played here five years ago). Classy move. Then came Pretty Lights and the name says it all. That dj has the best visual show I think I’ve seen. Better than Radiohead. No joke.

Epileptic seizure-inducing perhaps, with lasers, strobes, hi-def LED lights and screens, it was really stimulating. Pretty Lights was really my “old man in the club” moment for sure. To be honest, I had never heard of him, but he was the headliner. When he started, thousands (not hundreds, THOUSANDS) of glow sticks flew in the air. Amazingly, I never got hit by one all night. And kids danced, and danced and danced. For people who like to dance, Pretty Lights is it. For me, I just liked the pretty lights 😉

Friday wrap-up: I was not excited about the lineup at all for Friday, counting it as the weakest day. But I was really blown away by a few performances. If it only gets better from here, this could be epic.

(Sorry, I don’t have a photographer this year, so it’s my cell phone or borrowed photos)