Charles Bradley. The guy emits love. Seriously, you can practically envision him making love when he sings songs like “Lovin’ You, Baby.” His forehead scrunches up and he looks like he’s about to cry.

When he hit that knee and brought the mic stand down like he was caressing a woman, I imagined that must have been what it felt like to be at The Apollo in 1968. If anyone is still carrying the James Brown torch, it’s Charles Bradley. The man oozes sex. In fact, I think he could even turn Ted Nugent gay! When he sang “The World (Is Going Up In Flames)” he boogied down. It sure would have been fun to see Sharon Jones pop out at that moment to join him! 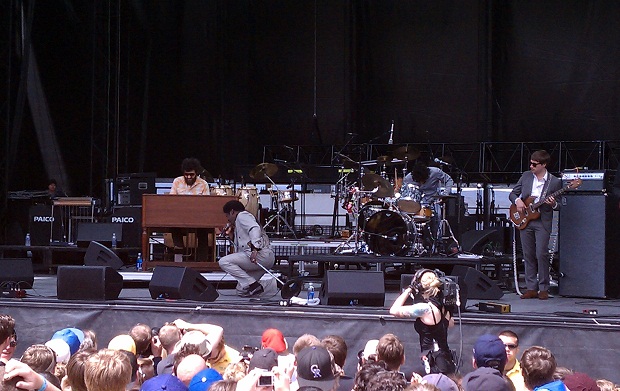 But he really meant those words, “Make this world right!” as he shouted them and demanded the crowd yell them back. I briefly got to meet him after his show and anytime you tell him you love his music, he just bows his head with gratitude, getting an almost sad look on his face. I sat across the table from him even later on in the press room while he was being interviewed by Seattle Music Insider, and the guy has much more love for people than he expresses on stage. The guy is an ultra class act. Only second to his great soul music, I really admire how grateful he is to be alive and that people love his music. He nearly teared up in his interview several times. It was amazing. 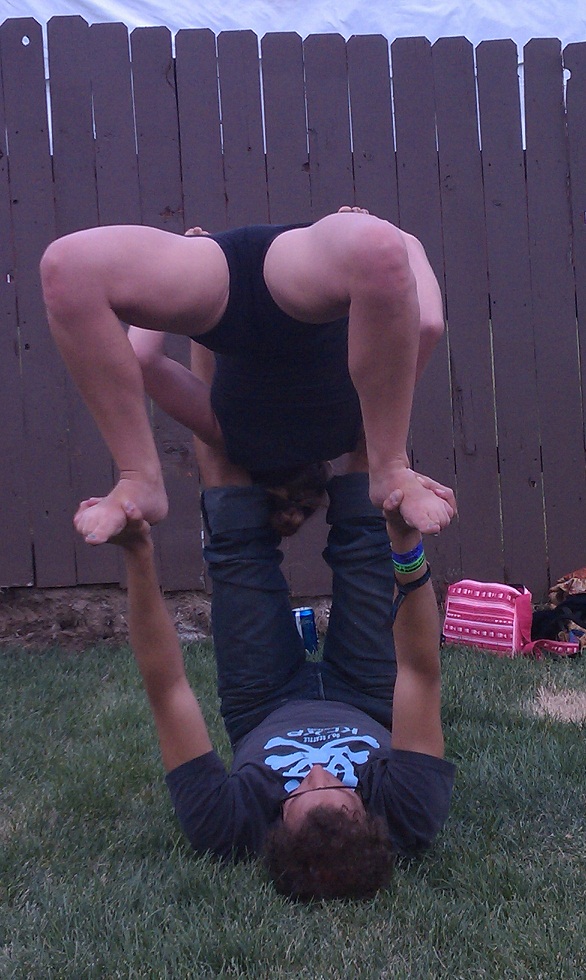 Not Charles Bradley. Or Sol. 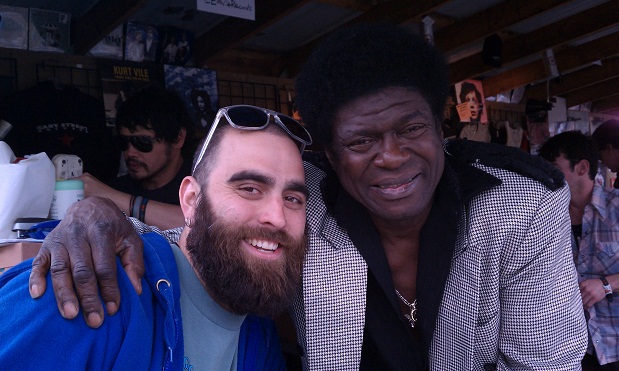 Charles Bradley. He even takes time to meet the ugly fans.

It only took Sol two songs to get to his recent hit “This Shit,” but the young crowd was already dialed in before that. With lyrics like “record companies can suck my nut sack,” he clearly let’s loose on anyone he wants while he raps. Well, the crowd let loose too. 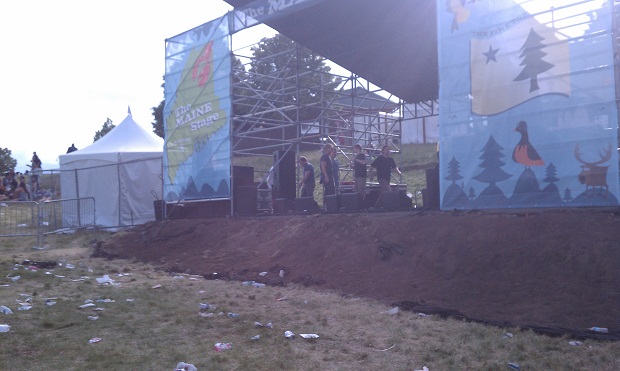 At the new Maine Stage this year, there is no barricade between the audience and the stage. Only a dirt pile that leads up to the stage. This became a problem for several reasons. First, dust kicked up all over the place. Next, Sasquatch never should have put Sol on a stage that small as the field was packed. Within a few notes, the kids were basically up on the stage, with no security to stop them. 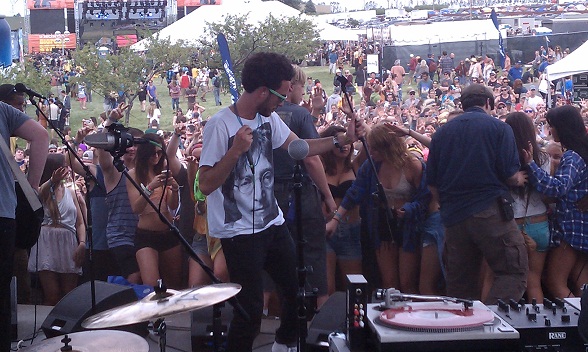 Sol and his crew holding back the pack

Sol made the best of it, wearing a John Lennon shirt, having fun, even inviting his friend Grynch out on stage for a song. But once feedback started to happen, the stage crew couldn’t get to the monitors to fix it because kids were everywhere. Sol got frustrated, asking everyone in attendance to back up five steps. Few listened. It was fun to watch from behind the stage though, and security eventually made its way up and took care of the situation.

Last year I broadcast it loudly and told all my friends they are missing out if they don’t see the acoustic shows in the acoustic tent. For the life of me I don’t know why they don’t listen. Today I got to see Alabama Shakes do four songs acoustic, right from the front row. Brittany Howard puts a ton into her performances as she sings, yet it’s clear she kind of has a “don’t give a fuck” attitude also. She just sings her ass off. A true southern gal, she reminds me of a ma ma. She has that “Don’t worry baby, ma ma will make everything okay” vibe. 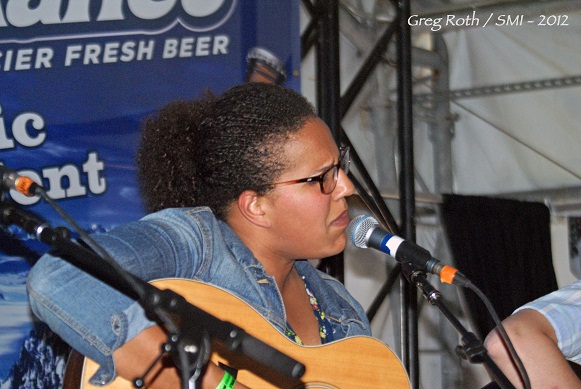 I saw The Shins about six years ago and they were boring live in concert. They still are. 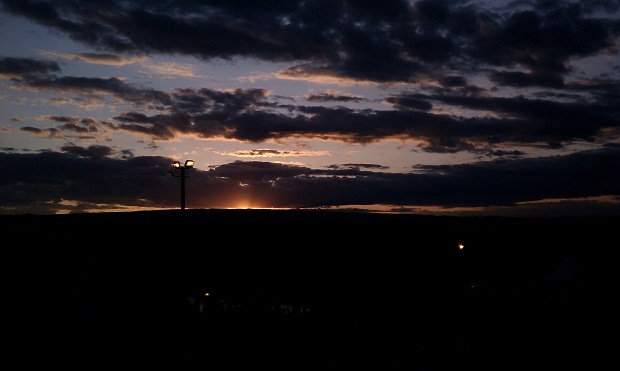 The sunsets are a nice treat at Sasquatch

Jack White is still a bad ass. Let’s make that clear from the start.

Talking to many fans around me (I squished my way up to about the 13th row or so), many of those in attendance never got to see The White Stripes (who last toured nearly five years ago already). So when White and his crew opened the show to “Black Math,” all hell broke loose in the crowd. 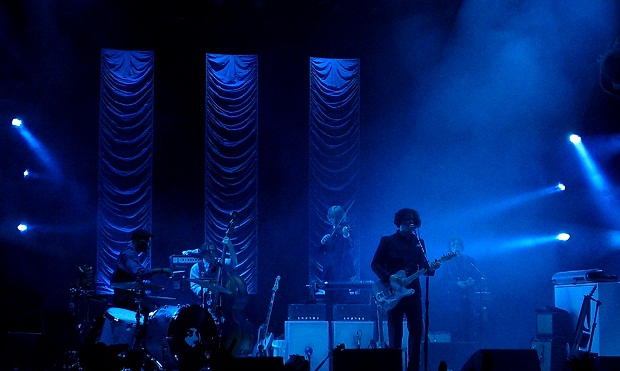 Dressed in a black, pin-stripe suit, White and his six male band members were all dressed sharp and classy. The stage was tinted a light blue (though sometimes dark blue), reflecting the color scheme of his latest album, Blunderbuss. White also brings a group of all females on tour with him and they switch it out with the boys often. Rumor has it his female drummer had another obligation on this night, so the ladies had the night off. Most of them chose to sit on the side of the stage and watch. 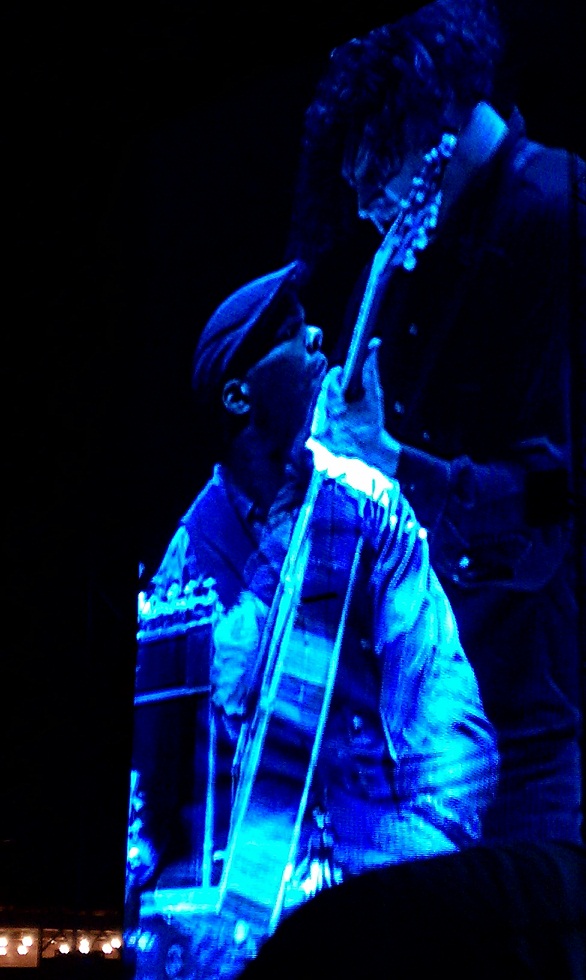 This group of musicians are very tight though, most notably drummer Daru Jones. It’s no disrespect to Meg White, but this guy is an animal on drums. Very animated, he pops up out of his seat most times when bashing his snare drum. Other instruments played through the night by his backing band included violin, pedal steel guitar, harmonica, etc. It was also fun to watch the band listen in anticipation before songs, wondering what White will call out next. Once told, some of them had to scramble quickly to get a new instrument.

That must be quite a catalog to memorize too. During the performance, we heard songs from Blunderbuss, The Dead Weather, Raconteurs, and White Stripes.

Songs I heard include (but are not limited to):

Raconteurs: Top Yourself, Steady as She Goes

Dead Weather: Blue Blood Blues, I Cut Like a Buffalo

Blunderbuss: Sixteen Salteens, Take Me With You When You Go, Freedom at 21

Even Hank Williams’ “You Know That I Know” worked its way into the set. Some highlights included White’s kicking solo during “Ball and a Biscuit.” I’ve seen that performed live before, but never with such technicality and ferocity combined. White rocked the guitar so hard at times he looked like his head was going to slam into the cymbals on the drum kit. The crowd did the now-famous “Seven Nation Army” chant before the encore to get the band back out on stage. When he closed the show with that song, it was by far the crowd favorite.

He hasn’t lost a step and now might be working with the best musicians he’s ever had in his corner. It felt like a real adult show with real instruments being played.

The next morning, his set is still all everyone is talking about…