For our third year in a row, The Seattle International Film Festival has invited Randomville back to the big party. And we mean BIG party as this is the largest film festival in America! You can purchase tickets to the films here and SIFF always needs donations from people in Seattle and beyond so donate here if you wish.

The festival kicks off on May 20th and we have a TON of previews for you to check out. Be sure to check back with us frequently for the next month to see more previews, live reviews, and maybe even an interview here and there. One of the many highlights this year will be the Tribute to Edward Norton.

Below are some films that will be showing between May 20th and 31st, and keep checking back as we will have previews for films showing later in the festival posted soon! Click on the links provided for showtimes, to buy tickets and get more information. 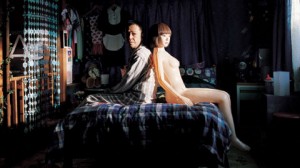 AIR DOLL (Japan)
This fable about an inflatable sex doll that wants to be a real girl is very different from director Hirokazu Kore-eda’s last film, Still Walking, a tender exploration of Japanese family life that was one of my favorites from last year’s festival.  In Air Doll, Kore-eda examines what it means to be human as we follow the doll from her master’s home to a job at a video store, where she experiences friendship, romance and ultimately tragedy. I was never much engaged in the story or the characters, but the imagery is lovely. (PI)

AMPLIFIED SEATTLE (USA)
Champagne Champagne.  Thee Emergency.  The Light.  The Spits. These are the names of the bands that are ushering in the fresh new Seattle sound that has been slowly but surely building forward momentum.  New York native John Jeffcoat recently compiled 13 short documentaries for a future MTV series, $5 Cover, featuring the aforementioned Seattle bands.  As quoted by Jeffcoat, “they were designed to be individual stand-alones, just to be part of the $5 cover experience…you watch the show, there’s a band you’re curious about, and you can watch the doc about the band.”  So for music afficionados who feel that Seattle music starts and ends with Death Cab for Cutie or Blue Scholars, this is sure to be an ear-opener. (JBB)
BEYOND IPANEMA (Brazil)
Contrary to popular belief, the legacy of Brazilian exports isn’t limited to a plethora of impossibly beautiful Victoria’s Secret models.  Since the 1940’s, when Hollywood went Lady Gaga for Brazilian import Carmen Miranda, music has long been Brazil’s prime cultural export.  Beyond Ipanema explores Brazilian music’s role in shaping global culture, from the brazilian punk-folk movement that was Tropicalia, to the seminal 1960’s film Black Orpheus, which heralded the arrival of Bossa Nova & Samba to ailing American Jazz artists, and the 60’s psychedelic band Os Mutantes, who’ve went on to influence modern contemporaries like Beck, Sean Lennon, and the Beastie Boys…30 years AFTER they disbanded.  Music enthusiasts and non-enthusiasts need apply. (JBB) 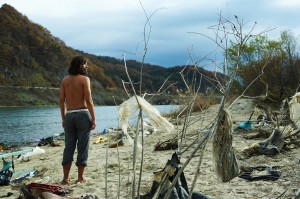 CASTAWAY ON THE MOON (South Korea)
This romantic fable starts out as a comic version of Castaway, as a suicidal young businessman is accidentally stranded on an island in the middle of an urban South Korean river. As he regains pride and self-confidence by tackling the challenges of castaway life, he is observed through a telephoto lens by a different sort of castaway, an agoraphobic young woman who lives in a nearby apartment building. The story becomes more serious as their relationship develops. Excellent acting, pacing and art direction make this a memorable love story. (PI)

THE CHILDREN OF DIYARBAKIR (Turkey)
Coming hot off the Dubai International Film Festival, Min Dit:  The Children of Diyarbakir tells the unfortunate tale of two young Kurdish children, Guilistan and Firat, who are forced to live on the street after their parents are brutally snuffed out by paramilitary forces.  Left in the care of their politically active aunt Yekbun, their run of unfortunate circumstances is compounded when she soon disappears without a trace.  At their wit’s end, the children eventually learn to fend for themselves in the war torn streets of Diyarbakir.  The Children of Diyarbakir is a thought-provoking tale that explores the human condition and its perseverance through adversity and direness. (JBB) 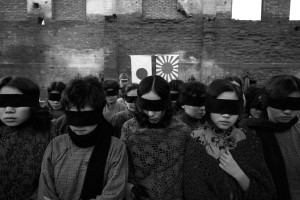 CITY OF LIFE AND DEATH (China)
Director Lu Chuan (Kekexili: Mountain Patrol) chronicles the 1937 “Rape of Nanking,” in which the Japanese military devastated the former Chinese capital city. Not for the faint-hearted, City of Life and Death depicts almost every form of man’s inhumanity to man that war seems to engender; in many ways it resembles films about the Holocaust. What makes the story bearable are a few significant acts of heroism and nobility, on both sides. While watching the film often feels like an act of witnessing, there is also much to appreciate aesthetically. (PI) 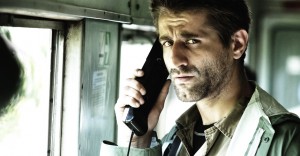 CRAYFISH (Bulgaria)
This darkly comic story of two childhood friends who are driven by the post-Soviet economy to take jobs in organized crime is delightful. The focus is more on character than plot; the two leads – a father-to-be and a depressed toymaker – are supported by a host of odd family members and gangsters, most of whom are given one scene each to make their mark. The dialogue is poetic and quirky, and the narrative builds to a climax that while not unexpected is handled brilliantly. Highly recommended. (PI)
DEVIL’S TOWN (Serbia)
A set of interlocking stories about modern Serbian life, Devil’s Town represents competent filmmaking but its mostly unsympathetic characters, gratuitous violence, and pervasive misogyny left me cold. (PI)

HOLY ROLLERS (USA)
This cautionary tale of an ambitious young man seduced into the drug trade is familiar, but also new in that the protagonist Sam (Jesse Eisenberg) is a Hassidic Jew. Based on a true story, Holy Rollers reveals a surprising criminal subculture within Brooklyn’s Orthodox Jewish community in the late 90s. The story is predictable, but it moves along at a steady clip and the performances are excellent. (PI) 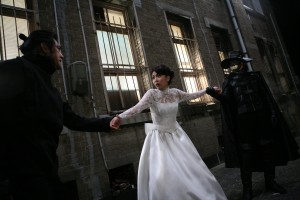 K-20: THE FIEND WITH 20 FACES (Japan)
A hugely entertaining “pulp-adventure” appropriate for the whole family, K-20 takes place in an alternate history in which World War II never happened and Japan is still under imperial rule in 1949. The story centers on a young circus performer who is framed by K-20, a supervillain thief and master of disguise. The hero finds himself on the run trying to prove his innocence and save the world from a devastating weapon designed by Nicola Tesla. There’s a feisty princess, lovable supporting characters, supercool art direction, and a score that sounds like a mashup between John Williams and Ennio Morricone. Fun fun fun! (PI) 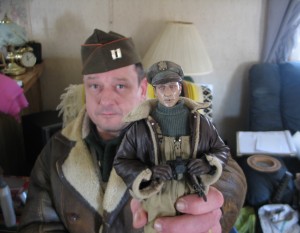 MARWENCOL (USA)
Mark Hogancamp, severely beaten in a bar attack in 2000, was left with extreme memory loss and a bad case of PSTD.  As a form of self-therapy, he has created  a fictional world in his backyard – Marwencol, a WWII-era Belgian town – in which he acts out and photographs Tarantinoesque adventures using mass-produced dolls as stand-ins for people he knows. Marwencol shows us Hogancamp’s emotional struggle to re-enter society as he comes to the attention of the mainstream art world. A narrative surprise about two-thirds into the documentary raises the stakes and casts the whole story in a new light. Highly recommended. (PI)
MUGABE AND THE WHITE AFRICAN (Namibia)
Directed by Lucy Bailey and Andrew Thompson, Mugabe and the White African is about the trials and tribulations of Mike Campbell, one of a handful of white farmers left in Zimbabwe after regional tyrant Robert Mugabe instigated a brutal, and notably racist, Land Reform Programme in the year 2000.  For you young kids, think District 9.  As explained by the director herself, “It resonates internationally because it is about big issues of human rights.  It is about humanity and you do not have to understand Africa to get it.” Again kids, think District 9. (JBB) 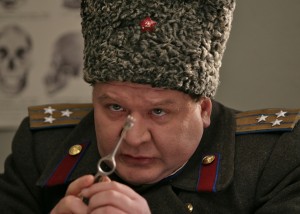 PETYA ON THE WAY TO HEAVEN (Russia)
The title character of this tale about a small Russian town in 1953 is a dim-witted youth who believes he has an important government job. Petya presents a largely benign portrait of life under Communist rule as the townspeople humor and even encourage him, although the story takes a dark turn at the end. Viewers familiar with Russian literature, history and politics will likely get more out of the film than I did; it mostly left me baffled. (PI)

REYKJAVIK – ROTTERDAM (Iceland)
Let’s get this out of the way first:  This 2008 Icelandic thriller about an ex-con lured into one last job smuggling booze is being remade as a star vehicle for Mark Wahlberg under the direction of current star Baltasar Kormákur.  Marky Mark jokes aside, Dirk Diggler can really pick ’em, as this film boasts Hollywood-caliber production values and a star making performance in lead actor / director Kormákur as the ex-con Christopher.  As far as Icelandic comedy-thrillers go, you can do infinitesimally worse than Reykjavik – Rotterdam. (JBB)

RIDE, RISE, ROAR (USA)
How do modern dancers teach a chorus to dance?  How can dancers, for that matter, NOT look like dancers?  That was the modus operandi for Talking Heads frontman and all around cool hipster David Byrne as he headed up the 2008/09 Songs of David Byrne and Brian Eno tour, which fuses modern dance choreography with his popular music in a wildly successful tour that even Byrne asked himself at one point, “What the hell was that?”  One of the more hotly anticipated entries at SIFF , Ride, Rise, Roar is a mesmerizing concert film that mixes exhilarating performances with insightful interviews chronicling the creative collaboration behind the show.  Once in a lifetime, indeed. (JBB)

ROBOGEISHA (Japan)
The latest effort from the crew behind cult Japanese imports like Machine Girl, Tokyo Gore Police and Vampire Girl Versus Frankenstein Boy (seriously), Noboru Iguchi’s B-film opus about two rivalrous sisters recruited into a league of highly-trained cybernetic geisha assassins (seriously) presents itself as the cinematic love-child of Paul Verhoeven’s Robocop and Troma film’s Sgt. Kabukiman N.Y.P.D. So if you’re a fan of machine gun bosoms, copious CG blood, underarm trap katanas, and bleeding buildings (and who isn’t, really?), suspend some serious belief and give Robogeisha a whirl.  And hold the fried shrimp. (JBB) 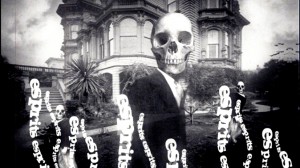 ROUGE CIEL (France)
“Art brut” is the French term for art made by the mentally ill, a subset of what we in the U.S. call “outsider art.” This documentary covers a lot of territory: the historical recognition of art brut as an art form in France, debates over the significance of art brut, and – the main reason to see it – profiles of several great art brut practitioners, including the Chicago janitor Henry Darger who wrote and illustrated a 15,000-page fantasy novel called In the Realms of the Unreal (which, incidentally, inspired the tattoo on my right ankle). A nice companion piece to Marwencol (see above). (PI) 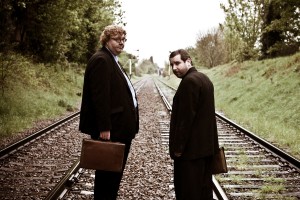 SKELETONS (United Kingdom)
Davis and Bennett work for a secretive company that dredges up people’s emotional pasts from their bedroom closets. Echoing Eternal Sunshine of the Spotless Mind, one of the practitioners misuses the procedure to revisit his own past, which we know will lead to bad consequences. There’s more to the plot, but what I enjoyed most was the depiction of the fictional profession – its ethical quandaries, office politics, and employment policies – as well as the lead performances and Bulgarian music soundtrack (which is amusingly referenced in the story). (PI)