This our second (check out our first batch) and final look at upcoming films for you to view at The 2010 Seattle International Film Festival, which runs until June 13th. These are films that we have an opinion on, however there are TONS more available on the SIFF website to preview.

We will also have live reviews of film premieres as well as interviews so check back soon with Randomville!

Hundreds of women have been murdered in the Mexican border town of Juarez in the last 20 years, and little has been done to stop it. The movie raises the question, is there a serial killer at work, or has violence against women become a cultural norm? It suggests a chilling answer: both.  Backyard, which is fictional but strongly based in reality, focuses on two women:  a world-weary but compassionate female detective, and a naïve factory worker on her own for the first time. As one tries to stop the killings, the other becomes a potential victim. It’s a more sincere, and more feminist version of Law and Order: SVU. (PI)

First-time filmmaker Jessica Oreck traces Japan’s fascination with beetles and insects dates back to 19th century Japan when one humble food-vendor named Chuzo first discovered the inherent calmness that came with the night chanting of their crickets.  Oreck shows the beetle obsession from the inside out via images, interviews, poetic musings, literary quotations, and video games. As a measure of belief that all creatures exist on an equal plane of capacity and possibility, the Japanese often assigned traditionally human, emotional characteristics to insects. I guess that explains the Pokemon phenomenon.  Pikachu! (JBB) 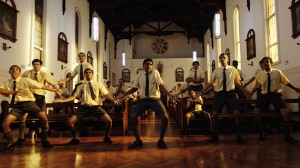 A lovesick Aboriginal teen at an Australian seminary school in the 1960s runs away to find himself in this musical comedy/road trip/coming of age movie. At first, I enjoyed the silly production numbers and offbeat dialogue. But then the movie starts asking us to care about its many supporting characters, including an eccentric hippie couple and a hobo tribal elder, which runs against its camp aesthetic. Bran Nue Day was based on a stage musical, and something may have been lost in the translation.  (PI)

Take the original Alien, toss in a dash of Total Recall and The Matrix, and make everyone speak German. Cargo isn’t very original, but it is a well-crafted science-fiction thriller. (PI) 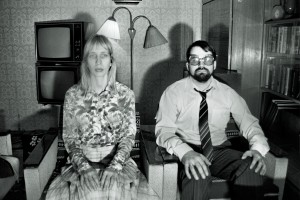 Gen Xers growing up in Estonia in the 70s and 80s were the focus of a cultural war between the U.S. and the Soviet Union, as their households could receive TV signals from both sides in the Cold War. This lively documentary mixes archival TV footage, photos, interviews, and dramatic reenactments to illustrate what it was like to be exposed to both “hard” propaganda from the Soviet government  and “soft” propaganda via Finnish TV such as Dallas, Star Wars and Knight Rider.  The movie’s anecdotal and light-hearted tone left me more amused than enlightened. (PI)

In 1962, filmmaker Alfred Hitchcock was celebrating the premiere of The Birds; in 1980, he died. Reworking a story by Jorge Luis Borges, Double Take imagines a meeting between the two Hitchcocks, “each one a caricature of the other.” This playful fantasy weaves together clips from Hitchcock’s interviews and movies, vintage TV commercials, archival news footage, and more to suggest intriguing connections between the Cold War and popular culture. Its humorous and mysterious tone make it a fitting tribute to Hitchcock as well. (PI)

EVERY DAY IS A HOLIDAY (Lebanon) 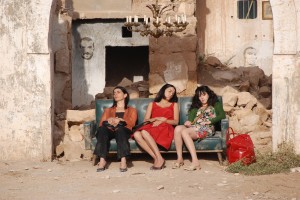 A busload of women are stranded in the desert on the way to visiting a men’s prison. The film focuses on three of them, each impacted differently by the violence of contemporary Lebanon, and one carrying a gun. Long takes, poetic monologues, evocative images, and deliberate pacing make this an “art film,” but those interested in female bonding will also enjoy it. (PI) 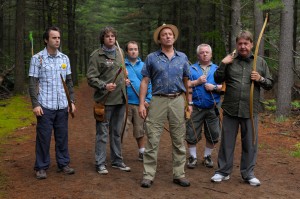 This highly entertaining cop comedy places a father-and-son team undercover at a father-and-son wilderness retreat, where in order to accomplish their mission (convincing a mob lawyer to reveal the whereabouts of a kidnapped police officer) they must work out their relationship issues (dad’s too stoic, son’s too passive). The story moves along like clockwork, the characters are designed to appeal to a wide demographic, and it’s actually pretty funny, in a French comedy way (lots of complaining and insults). I predict an imminent Hollywood remake, which you can try casting on your way home. (PI) 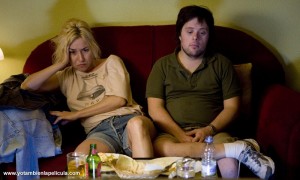 A poignant story of a social outcast longing for love, Me Too stands out because the protagonist, Daniel, as well as the actor who portrays him, has Down Syndrome. Daniel is very high functioning and aspires to be “normal,” falling in love with an attractive but emotionally stunted co-worker. As she gets to know him, so do we, and what I liked most about the film is its realistic yet hopeful message that while their relationship is not inevitable, it is possible. I liked less a subplot about a thwarted romance between two younger adults with Down Syndrome, which felt too much like an after-school special. (PI)

ROCKSTEADY:  THE ROOTS OF REGGAE (Canada)

“The music that I loved would be forgotten if I didn’t tell you our story” says narrator Stranger Cole, who guides us through the history of the Rock Steady era of Jamaican music.  In the late 1960s, between ska and reggae, Rocksteady defined Jamaican music with its socially conscious lyrics and prominent bass / rhythm at a time during economic upheaval and poverty.   Rocksteady:  the Roots of Reggae focuses on the careers of Rocksteady musicians Hopeton Lewis, Marcia Griffiths, and Ken Boothes as they recount their experiences via archival studio performances and interviews.  A must see for fans of early reggae, if only to hear one of Bob Marley’s backup singers talk about the one time they “schtupped” on the kitchen table. (JBB)

SECRETS OF THE TRIBE (Brazil) 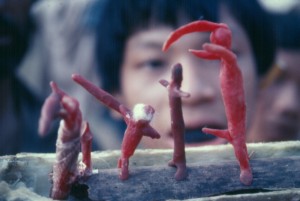 In the 1960s, anthropologists discovered and began studying the Yanomami Indians, a remote Amazon tribe who were valued because they were untouched by modern society. This fascinating and infuriating documentary investigates the motives of the anthropologists, many of whom used the Yanomami to further their careers, often at great cost to the tribe. The film consists mostly of interviews, in which the anthropologists accuse each other of unprofessional and even criminal conduct; it is left to the viewer to sort out the heroes from the villains. (PI)

Gollum, er, I mean Andy Serkis gives a character tour de force as the polio stricken Ian Dury, whose band, Ian Dury and the Blockheads went on to be remembered as one of the co-founders of the punk rock movement in the late 1970s.  Serkis captures Dury’s nuances to a tee, his distinct voice and colorful mannerisms only as surreal and kinetic as the cinematography itself.  Add to that wonderful acting turns by Olivia Williams (Dollhouse) and Naomie Harris (Pirates of the Carribean) as Dury’s wife and young girlfriend, respectively, Sex & Drugs & Rock & Roll is a rowdy yet heartfelt film that should appeal to the punk, the geek, the criminal, the brain, and the basket case in you.  Excuse the Breakfast Club reference. (JBB)

SOME DAYS ARE BETTER THAN OTHERS (USA) 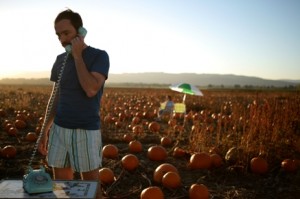 Three stories set in Portland are interwoven in this sad and funny low budget indie film that reminds me of the work of Miranda July and Lynn Shelton, also Northwest filmmakers. One character, played by Sleater-Kinney’s Carrie Brownstein, is a heartbroken reality TV show fan; another, played by James Mercer of The Shins, is a professional temp  whose stepfather is making a movie about soap bubbles. Not much happens, but we get to know and like the characters well enough to wonder how their stories will intersect, as they inevitably do. Some Days is a wry and thoughtful portrait of contemporary Portland. (PI)

Graphic novelist Neil Gaiman says of frontman Stephen Merritt, “[He] makes Lou Reed look like little orphan nanny.”  He is notorious among journalist circles for being a sparse, annoyingly deadpan interviewee.  His closest friends label his sound as that of a “young heartbroken liberal arts graduate.”  He’s been called a racist because he’s not into hip-hop.  He’s written a piece called “The Formulaist Manifesto,” which lampoons bubblegum pop for being numbingly formulaic.  Despite all that, Merritt and his band, The Magnetic Fields, have been largely praised by their contemporaries for composing some of the most emotionally honest indie pop masterpieces of the last two decades (69 Love Songs, Distortion).  Through decades of footage, the film traces the band’s 20-year relationship and in particular, an intimate look at the enigmatic Merritt himself, who may or may not be more than a simple misanthrope. (JBB)

TURN IT LOOSE (United Kingdom)
“People see us battle and people see us in the circle, but as far as actually feeling it when we’re in the circle, only b-boy people understand. When you really think about it, like in Africa, when they used to dance, it was a spiritual thing for them as well, you know?  Them in a circle, them chanting; thats basically the feeling we get.  That’s pretty much what hip-hop is, man,” says Ronnie, veteran breakdancer from Las Vegas, Nevada.  Director Alastair Siddons aptly named this intense, yet soulful dance film after the James Brown ditty, and boy, does it deliver!  From the Breakdancing World Championship in South Africa to the world’s streets, six competitors from as far as Senegal, France, and abroad fight for the chance to be called “the best.”  Turn It Loose allows the audience access to the psychological terrain of the competition and the kinetic frenzy of breakdancing.  Definitely for fans of hip-hop culture.  And the Matrix.  You’ll see. (JBB)

Not to be confused with the 2006 horror film of the same name, Turistas is the second film from Chilean director Alicia Scherson, and the first film with nary a young ingenue in sight that I’ve seen in a while, helped no less by female protagonist (antagonist?) Carla, who vainly tries to salvage what’s left of her life after being abandoned on the side of the road by her distraught husband (I dare not spoil the reason…sorry).  Turistas is filled with characters whose self-destructive and self-absorbed tendencies give the character interplay an unpredictable yet nonetheless compelling pace to them, kinda like the best episodes of House M.D. (JBB) 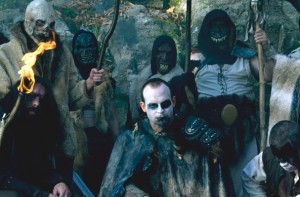 There is a great movie to be made about live-action role-playing communities (LARPs),  but The Wild Hunt isn’t quite it. Whiny Erik intrudes on a medieval LARP camp to reclaim his girlfriend, equally whiny Evelyn, who is taking a break from him by pretending to be a kidnapped Viking princess. The film starts as a comedy, as we meet the camp’s various tribes and their eccentric leaders, one of whom is Erik’s brother; as the story takes a Lord of the Flies turn, the tone becomes extremely dark, like the ancient legends the LARPers are obsessed with. The intriguing supporting characters and subplots almost make up for the black hole of a romance at the movie’s center. (PI)

Director John Waters says this of the titular poet, “He became famous before any of his peers for all the things you were supposed to hide: He was gay; he was a junkie; he shot his wife …”  So obviously, William S. Burroughs’ career, both professionally and personally, is rife with controversy.  But as Thomas John Watson Sr., president of IBM circa 1914 to 1956, once said, “…follow the path of the unsafe, independent thinker.  Expose your ideas to the danger of controversy. Speak your mind and fear less the label of “crackpot” than the stigma of conformity.”  WORD.  William S. Burroughs:  A Man Within explores the pop culture legacy of Burroughs through his literary works, The Naked Lunch, Queer, and Junkie, and transfixing stop-motion animation by helmer and unabashed Burroughs groupie, producer Yony Leyser. (JBB)