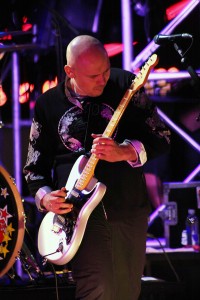 The Smashing Pumpkins have announced brand new US dates for their fall tour.  The group has added 14 new dates in addition to previously scheduled Canadian dates in support of their new album, Oceania.  The US leg of the tour will kick off on October 10 and run through the beginning of November.  Presales for the majority of the dates begin on Tuesday, September 4.

Oceania has been described as an album within a larger 44-song project, Teagarden by Kaleidyscope.  The album was written and composed completely by Billy Corgan and reached as high as 4 on the Billboard 200 Chart.  Oceania will be played in full at the start of each show, followed by some of the band’s more classic songs.  More information can be found at the Smashing Pumpkins’ website.