UPDATE: WE HAVE A WINNER! CONGRATS TO KYLE BLAIR OF SILOAM SPRINGS, ARKANSAS FOR WINNING OUR CONTEST!!!

Our wonderful readers at Randomville, YOU are in luck as one of you will win a free, signed copy of the Someone Still Loves You, Boris Yeltsin LP called: Tape Club.

There are two ways to win, either leave  the comment Yeltsin Love as a comment to this article, or send an email to contests@randomville.com with the words Yeltsin Love in the subject header. From those two sources, we will draw one lucky name to win our contest! You have until 11:59pm EST on Sunday, October 23rd to enter.

“Someone Still Loves You, Boris Yeltsin (SSLYBY) is an indie pop band from Springfield, Missouri. Their first full-length album Broom, independently released in 2005, received good reviews from Spin Magazine and they are now signed with Polyvinyl Record Co.. The band’s name refers to Boris Yeltsin, the first President of Russia (1990–1999).

We’ve been playing music together since 1999 or 2000. There’s a Wikipedia article with a more detailed version.

Met at a Super Bowl party in 1999. Broncos vs. Falcons

Polyvinyl [Record Label] 2006. Our song is on The OC. The OC gets canceled.

Boris Yeltsin dies 2007 and we play at his funeral in Moscow (66% true). Also in 2007: First Europe tour with Jakub. Mute Math/Cinematics tour. Phil tries to kill John with a bar stool after a bad show in New Mexico. 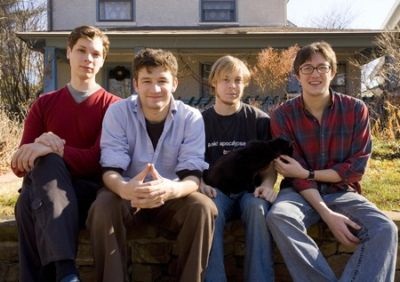