Star Anna and the Laughing Dogs: Live in Concert

In classic myths, the hero must descend through darkness before rising triumphantly into the light to conquer. Star Anna has clearly been to that dark place and is on her way up, shining brightly.

An Ellensburg, Washington native, Star Anna is gaining attention throughout the West Coast, and will only keep ascending as the word spreads about her unique voice, deep lyrics and multi-talented band. Her country-rock twang sounds a bit like Lucinda Williams without the slur blended with Mindy Smith. The Laughing Dogs, all accomplished musicians, backed up her strong, beautiful, and at times heart-wrenching vocals with a tight, rocking set at The Tractor Tavern (Seattle) on December 30. 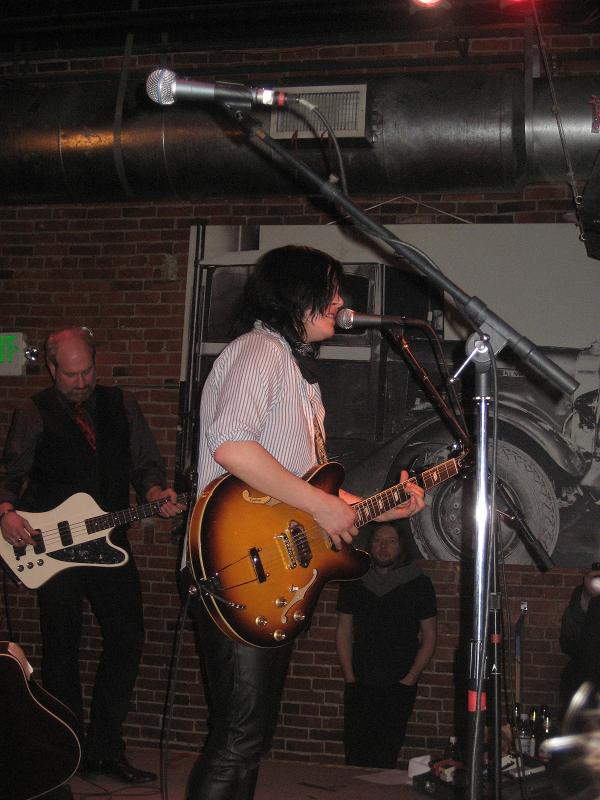 The lead guitarist and backing vocalist Justin Davis had amazing solos, and fed body and soul into them as his guitar strings bent to his will. Justin and Star stood face-to-face for guitar jams, and the two became a double-necked guitar monster of sound.

Other band members included talented organist Ty Bailie of Eastern Washington who has played with the likes of Pearl Jam’s Mike McCready (a self-proclaimed stalker of Star who will also produce and perform on her upcoming album) and Duff McKagan of Guns ‘n’ Roses. The properly attired bass player Keith Ash recently returned to Seattle from a long stint in L.A. and joined the band in the spring of 2010. He rocked a Gibson Thunderbird among other instruments. Travis Yost is a veteran Ellensburg drummer and has complemented Justin Davis’ guitar prowess in a previous band called Puptulla.

Star Anna’s long set list included songs from her debut album, Crooked Path, her sophomore album, The Only Thing That Matters and new material from the upcoming album due this March.

Overall, it was an energizing and eclectic set. Her lyrics are poignant, but somehow feel uplifting when arranged with fast tempos and rock-infused guitar. The audience, many very familiar with her music, sang along, nodded their heads and smiled.

The second song of the set, “Hawks on a Pole” from the album, The Only Thing That Matters really got our attention as she wailed through the lyrics with a candor I haven’t heard before in a female vocalist. The chorus attests to her dark, painful soul-search:

“My body just aches with a longing that takes control/And this daily search for relief is taking its toll/We keep looking in all the wrong places to ease our soul/What we’re really looking for I guess no one knows.”

One fast little ditty near the end of the set was from Crooked Path called “Devil Don’t Remember My Name” and begins with a verse that could indicate her rise to the top:

“Sun drenched and glowing by the unoffended light/where nothing goes down without a fight/Before the end of days/we’ll set this whole wide world ablaze or no one will remember our names.”

She also mixed it up with some genre-bending, bluesy songs I’m hoping will be included on her third album. Her voice can go from heartbreak-smooth to growly and raspy in the switch of a song.

I managed to take a few pictures of Star Anna, but she seemed shy to the camera and to the audience; so opposite of her soul-spilling songs. Her hair hung in her face; in the rare moments when she pulled her hair back with her hand, she let out a bashful but genuine smile. She has a beautiful, porcelain face with Elvis Presley eyes. When she hit a high note, she rose up on her tip-toes and leaned forward into the mic.

Star and the boys brought a few friends to The Tractor. I looked around the packed bar and saw many local musicians who came out to support the band as well as students and the usual Tractor crowd. I wondered who else was lurking in the dark tavern. Regardless of our backgrounds, we were in united agreement that we were witness to something big: a hero and her band on the rise to national stardom. We were awestruck.

Added bonus! Did you see our pictures and review of Star Anna and The Laughing Dogs last year at Bumbershoot??

EXCLUSIVE: AN INTERVIEW WITH THE MODEL PILOTS An Interview With Hopewell
Copyright 2009 - 2012
Randomville.com ™
All Rights Reserved - Photos Licensed by PR Photos