Stephin Merritt’s Musical Adapation of Coraline Out In May 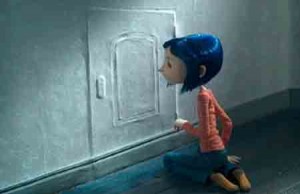 Coraline is one of those kids’ flicks that’s really enjoyable to everyone. It’s got imagination in spades, an oh-so-affable protagonist, and is a fairly unique take on the whole fairy tale thing. I liked that it was dark enough that even my “grown-up” friends and I were creeped out by parts of the film. (“What the hell, their eyes are buttons?!”)

So, PitchforkÂ is reporting thatÂ Magnetic Fields (among his many, many different acts)Â frontman Stephin Merrit is now penning a theatrical production of Coraline, set to be debuted at the Lucille Lortel Theatre in New York on May 7. Merritt himself will not be performing, so we will be without his sometimes-growling-sometimes-sweet baritone voice, but his composition skills are top-notch, not to mention he is one of the most clever lyricists out there.

You can listen to a few audio snippets here. I for one am totally stoked for this. Merritt is a perfect choice to put this kind of material to music, and has some amount of experience doing so: if 69 Love Songs isn’t enough to convince you that the man can musically do anything, as The Gothic Archies, he did the musical companion pieces for A Series of Unfortunate Events, and Lemony Snicket has been known to play accordion with him on occasion.