The 25-day cinema-lovers marathon that is The Seattle International Film Festival ended on Sunday. Of course our two reviewers couldn’t see all 408 entries, but they did make a sizeable dent in the catalog. Read below to find out which movies they think deserve special mention.

The festival awards were announced Sunday afternoon. The SIFF jury presented its top awards to The Reverse (Best Director), Marwencol (Best Documentary), and Night Catches Us (Best American Film). It also recognized several short films. The Hedgehog won the Golden Space Needle (audience favorite) award for Best Film, and Golden Space Needles were presented in other categories as well. To read about all the awards, see the SIFF website.

I saw Marwencol before the festival even started, and nothing has impressed me as much since. (I was thrilled to learn it won the jury award for Best Documentary). This fascinating documentary about a trauma survivor who has created a fantasy world in his backyard gave me new insight into the phenomenon of outsider art. I was lucky enough to interview the director, Jeff Malmberg; we’ll run that story later this year, when Marwencol starts its theatrical run. 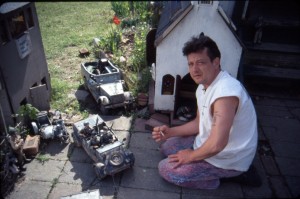 A few other personal favorites were the minimalist Portland indie Some Days Are Better Than Others, starring musicians Carrie Brownstein and James Mercer; the very black Bulgarian crime comedy Crayfish; award winner The Hedgehog, a sweet French tale of adolescent angst and midlife romance; and Double Take, a Borgesesque story about Alfred Hitchcock meeting himself at two key points in the Cold War.

Speaking of the Cold War, which turned out to be something of a theme this year, I also enjoyed The Trotsky, a politically smart teen comedy from Quebec featuring a fearless lead performance by Jay Baruchel, and The Reverse, a Polish remembrance of the repressive political climate of the 1950s and how it affects one brave young woman.  A couple other films that draw power from their basis in fact are City of Life and Death, about the horrifying  Japanese 1937 “rape of Nanking,” and Backyard, concerning the more contemporary mass murder of young women in the Mexican border town of Juarez. 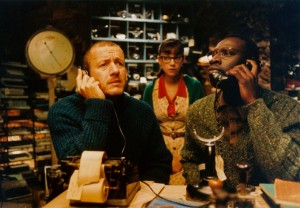 On the flip side, a few films provided more entertainment than I expect from a film festival: Micmacs, a deranged version of Ocean’s 11 by  the French visionary Jean-Pierre Jeunet  (coming soon to a theater near you); K-20: The Fiend With 20 Faces, a family-friendly Japanese steampunk superhero adventure; and Soul Kitchen, the latest from German director Fatih Akin (whose Edge of Heaven was my favorite film of 2008), a multicultural comedy about two brothers’ misadventures in the restaurant business.

Finally, I look forward every year to SIFF’s archival screenings. Two this year blew me away: the 1959 Polish film noir Night Train, which I want to see again right now, and the 1916 silent film 20,000 Leagues Under the Sea, given MST3K treatment by pop legend Stephin Merritt, who along with a few friends provided campy dialogue, silly sounds effects, and a jaunty musical score.

Like Pam, I too was impressed this year by alot of the SIFF entries for 2010.  However, three films especially stood out to me, not only for their content, their cinematography, their guts, but also overall audience reception.

3)  Meet Monica Velour. Director Keith Bearden’s feature film debut tackles social taboos about ageism, feminism, and forbidden romance and eschews film cliches left and right, whilst at the same time crafting fully realized characters that have dimension and are engaging to the end.  Actors Dustin Ingram and Kim Cattrall shine as the nebbish teen Tobe and his love interest, the retired and down-on her luck porn star, Monica Velour.  Meet Monica Velour is quirky without losing sight of reality, heartfelt without being too sappy, yet at times poignant, but not slit-your-wrists depressing.  Kinda like life.  Just don’t ask Bearden about recent indie darling, Diablo Cody.

2) Ride, Rise, Roar. How do modern dancers teach a chorus to dance?  How can dancers, for that matter, NOT look like dancers?  That was the modus operandi for Talking Heads frontman and all around cool hipster David Byrne as he headed up the 2008/09 Songs of David Byrne and Brian Eno tour, which fuses modern dance choreography with his popular music in a wildly successful tour that even Byrne asked himself at one point, “What the hell was that?”  Ride, Rise, Roar is a mesmerizing concert film that mixes exhilarating performances with insightful interviews chronicling the creative collaborations behind the show.  Once in a lifetime, indeed.

1)  Turn It Loose. “People see us battle and people see us in the circle, but as far as actually feeling it when we’re in the circle, only b-boy people understand. When you really think about it, like in Africa, when they used to dance, it was a spiritual thing for them as well, you know?  Them in a circle, them chanting; that’s basically the feeling we get.  That’s pretty much what hip-hop is, man,” says Ronnie, veteran breakdancer from Las Vegas, Nevada.  Director Alastair Siddons aptly named this intense, yet soulful dance film after the James Brown ditty, and boy, does it deliver!  From the Breakdancing World Championship in South Africa to the world’s streets, six competitors from as far as Senegal, France, and abroad fight for the chance to be called “the best.”  Turn It Loose allows the audience access to the psychological terrain of the competition and the kinetic frenzy of breakdancing.  Definitely for fans of hip-hop culture.  And the Matrix.  You’ll see.