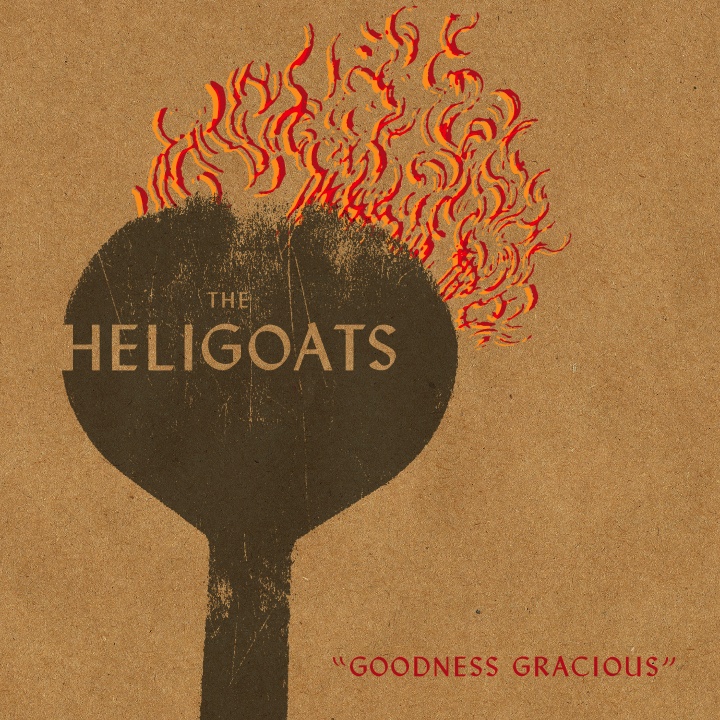 The Heligoats has been an ongoing side project of Chris Otepka (formerly of Troubled Hubble) since 1999. With a varying cast of musicians and instrumentation over the years, Otepka has kept the flow of at least one record per year for The Heligoats. Currently his musical outfit on Goodness Gracious includes Mike Mergenthaler, David James, and Steven Mitchell who are members of the Chicago pysch-folk band Ulysses S. Grant. This collaborating effort has a sound fusion of Paul Simon meets Adam Duritz with a hint of The Mountaingoats in an Indie psych- folk rock infusion. The album has a spacey, environmental, strange eccentricity to it that grabs your attention with toe-tapping authority. Each track begins with variant guitar overtures and segues into percussion and swirling lyrics.

The beginning track “A Guide to the Outdoors,” starts with the sound of crickets and nighttime noises and then the guitar comes in and draws us into the colorful voyage of Otepka’s newest musical vision. As we slide into “Mercury,” the second track on the album with a slower pace and lolling guitars, we’re told in the lyrics, “Don’t be discouraged, dead fish on the beach, they were probably just swimming, in mercury…”  This song is a short and sweet tome about the sad state of our planet, with truth in carefully crafted lyrics. The next track “Fish Sticks,” jumps in feet first with a song that has quite the Counting Crows feel to it with rambling guitars and quirky lyrics.

Throughout the album there seems to be a theme of water within song titles, words in the songs, and even ocean sounds. Track four is titled “Water Towers on Fire,” and the following track “Florida Panther,” starts in with “Swimming pools full of bottled water.” The following song “Aquifer,” seems almost an extension of the previous track with the sounds of windchimes and ocean waves and the echoing lyrics of “Blue crabs buried in the sand.”

I’ve always had an affinity for the ocean and musical creativity and The Heligoats have these featured prominently in this album. The album is ten tracks of artistic and imaginative music and lyrics with a feel-good, hopeful vibe that has the perfect closing track: “Goodness Gracious,” which is the namesake of the album and once again ties in the ocean where Otepka sings, “I never knew I was frozen, until you turned on the heat, to reveal oceans of honesty.” And then we are bid farewell with, “goodnight… goodnight… goodness gracious goodnight.” I really can’t think of a more perfect way to end an album. Each song advances to the next by building a musical staircase that blends together in a symbiotic communion with each advancing step. When you reach the top; sans end of the album/staircase you can’t help but look forward to the next musical journey up those same steps.