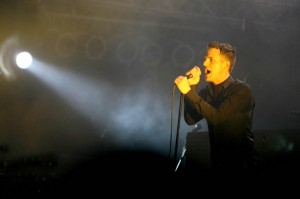 Brandon Flowers, Dave Keuning, Mark Stoermer, and Ronnie Vannucci Jr. are hitting the road in support of their new album, Battle Born.  The foursome, better known as The Killers, has scheduled a limited number of shows across North America in 2012.  The band will end the run in their hometown of Las Vegas on the last weekend of the year with two shows.  The shows will take place in The Chelsea at The Cosmopolitan of Las Vegas, which is equipped with a large marquee on the Vegas strip.  The concert will be played in its entirety on the marquee for anyone unable to get a ticket.  The concert should be one of the highlights of an always eventful weekend in Sin City.  Tickets for the newly announced dates begin onsales this week.  You can check out the links below for more ticketing information.

The band’s new album will be the fourth studio album since their initial debut in 2004.  The Vegas-based group has sold 15 million albums worldwide, which will surely rise significantly upon the release of Battle Born.  You can pick up the new album at local retailers and through digital stores tomorrow.  The list below contains all the currently scheduled shows for the US and Canada.