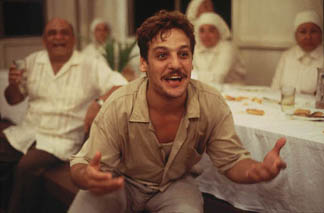 Che Guevara is, to the average American, nothing more than an appendix in the story of the Cuban Revolution of the early 1960s. The firebrand revolutionary’s picture is sometimes found on the wall of college dormitories along with favorite rock icons, and this view of the man is about all we know of him. Now along comes a movie about Guevara which, albeit somewhat liberal in artistic license, tells the true story of two young men, Ernesto Guevara de la Serna (played by the darkly handsome Gael Garcia Bernal) and Alberto Granado (Rodrigo De la Serna), who set out from Buenos Aires in 1952 to see South America on their beat-up 1939 Norton motorcycle. The story, told in an authentic style by director Walter Salles, follows the two young medical students on their adventures through their native continent. It is a heart-warming and disarming view of how they discovered themselves and their values as they explored the breadth of the world they lived in.

The film, beautifully shot in many fascinating locations, tells a compelling tale filled with much humor and feeling. The soulfulness of Bernal lends itself well to the awakening of the social conscience of Guevara as he encounters the conditions of the peasants throughout his journey. The supporting actors, almost all amateurs hired on location, are well-directed and there is none of the suspension of disbelief one gets with most travelogue movies. In one instance the director depicts Guevara and Granado’s work in an Amazonian leper colony by using an actual colony with the patients as actors. This and other touches lend the story a verisimilitude not usually found in Hollywood.

Authenticity is the major thought that comes to mind over and over. Without delving too deeply in the pathos of the plight of the common people of South America, there is a genuine understanding of how this journey created the motivation that led Guevara to dedicate himself to revolution. Yet one doesn’t feel that any communistic preaching is being done here. The story is what it is and leaves you thinking about the difficult decisions we all make in order to live. A definite must-see for anybody with curiosity about this enigmatic historical figure, and a good story for those just looking for something that’s not a Hollywood thriller.