This is one of the many films we will be reviewing as part of The Seattle International Film Festival.

Imagine if you paired Steven Colbert with Sascha Baron Cohen, and they decided to become modern Robin Hood’s, literally going out and messing withÂ gigantic corporations that do bad things morally, and sometimes their antics cost these companies money…even billions!

The Yes Men Fix The Worldis the documentary that would probably put a smile on anyone’s face, except maybe Dick Cheney. Even his old company, Halliburton is not safe from the antics of this prankster duo. Along with them, companies like Exxon, Housing and Urban Development (HUD), and evenÂ The New York TimesÂ fall victim as The Yes Men (Mike Bonanno and Andy Bichlbaum) hold fake press conferences, posing as company representativesÂ announcing fake news that usually makes most people smile, but the companies (and media) don’t always find it amusing. 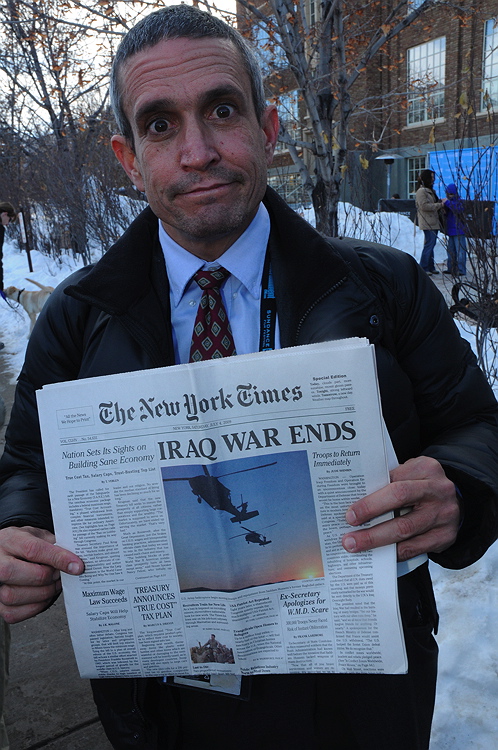 By far their biggest prank was when they posed as reps for Dow Chemical, who within recent years had purchased Union Carbide, the company responsible for the Bhopal, India tragedy in 1984 that injured thousands of people. They made a press release on the BBC news in front of millions of people, declaring that Dow was going to finally help out all of those people of Bhopal and would be sending billions of dollars in their direction. Well, stock holders of Dow were not thrilled of this news and the Dow stock plummeted almost immediately upon hearing this news.

And that’s pretty much what they do. They fuck with people.

The Yes Men’s hearts are in the right place and whileÂ  they don’t want to see companies tank, they really just want them to be responsible for poor actions that they have made…kind of like how we all do. ButÂ  the difference is that The Yes Men have the courage to actually stand up to these corporations in order to raise awareness. How these guys don’t get sued repeatedly and thrown into jail is beyond me, but I hope they keep up the antics. This was a fantastic movie and the crowd is dying in laughter throughout the whole movie. I’m feeling pretty confident that this film will win some awards.

This is the second movie by The Yes Men and more information is available here. If you are in Seattle, there will be one more showing of this film during the film festival on June 4th. More details here.