Each month, Randomville profiles an artist that Third Man Records provides us. For November, we’re profiling Nobunny. Also, scroll down to the bottom for a chance to win a free, live album from Nobunny!

Justin Champlin has worked under the name Nobunny since 2001. His band of the same name has many different recordings, many of them cassette or vinyl singles, as well as two LPs. Love Visions came out in 2008 and immediately made a splash on the scene. This is garage rock at its finest, with grimy guitars and treble-heavy vocals. Most songs don’t come close to breaking two minutes, though a few have aspirations of hitting three. The DIY aesthetic on this thoroughly endearing album makes it an interesting album to listen to. 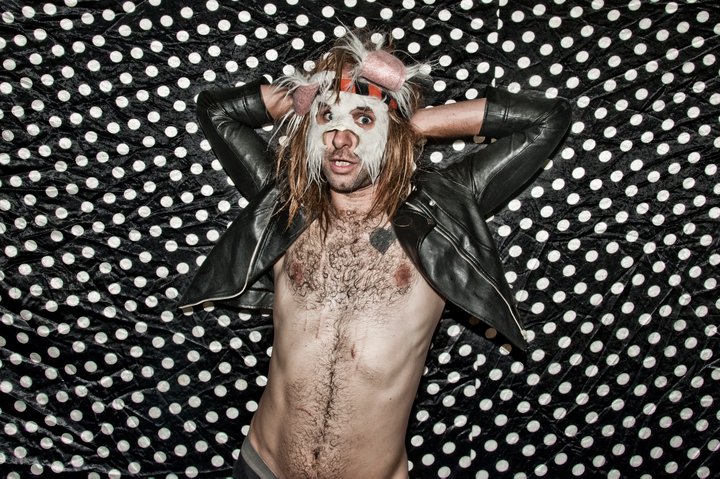 Make no mistake though: Nobunny is far and away a live band. Champlin’s limits do not end with the grungy rabbit mask (surprise, surprise) that has become his trademark. Raw meat, ball gags, firecrackers and coats made of trash make up his wardrobe at times. This brings the spontaneity of punk back to a live stage that may have grown stagnant over the years. Nobunny isn’t afraid to bumble through the beginning of “Barbara Ann” before launching into a raucous power pop song. Nobunny won’t display stupendous amounts of musicality, rather a live show from them might instead bring about handstands, shouted lyrics and bobbing the shit out of your head.

Listening to First Blood, you can see why a man like Jack White has taken an interest in the band. Guitars have expanded in scope and loudness. Bubblegum pop clearly embraces this record, especially in tunes like “Ain’t it a Shame,” with that Wreckless Eric aesthetic. Nobunny still maintains the wild nature of their debut throughout this notably improved quality of a recording. However a fiddle quietly bowing along with the rest of the band slows down the tempo pace in “Breathe.” This album is definitely more refined than previous efforts. The heightened production quality really helps bring out the Nobunny sound out and separate them from your typical garage fare. First Blood was put out by Third Man, and the two have collaborated on designing the art for a limited-pressing record.

If you ever have the chance to see Nobunny perform, by all means take it. They’re one of those truly unique bands who can simply enrapture a venue with their spellbinding mania. These are some of the best songs and dance moves you’ll ever see performed by a rabbit.

READERS! WANT TO WIN A FREE COPY OF NOBUNNY, LIVE AT THIRD MAN RECORDS ON SPLIT-COLOR, BLACK AND BLUE VINYL? LEAVE THE COMMENT “BUNNY!” OR SEND AN EMAIL TO CONTESTS@RANDOMVILLE.COM WITH “BUNNY!” IN THE SUBJECT LINE. YOU HAVE UNTIL SUNDAY, NOVEMBER 13TH AT 11:59 P.M. EST TO ENTER, THEN WE WILL SELECT ONE LUCKY WINNER TO RECEIVE THIS PRIZE. GOOD LUCK!